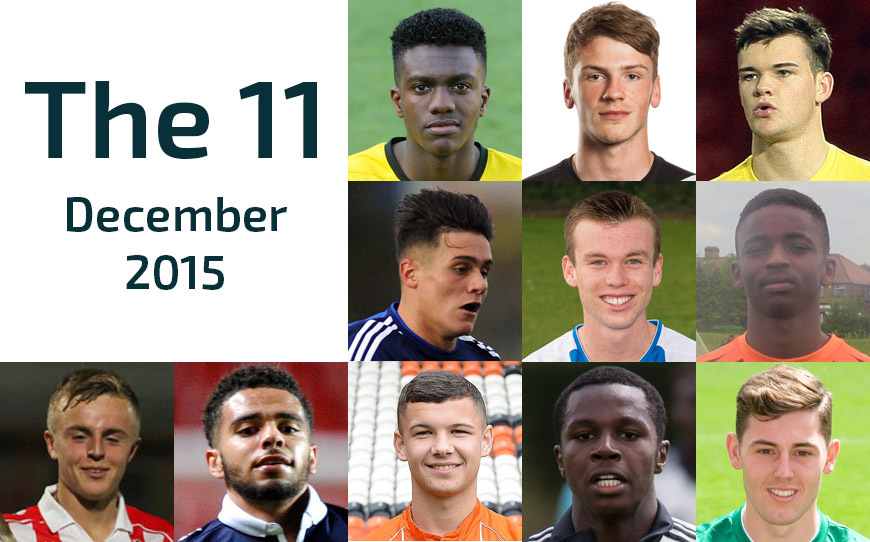 Here is the in depth look at who made LFE’s XI for December 2015 and why they’ve been included:

Defender Hakeem made his Barnet debut in the FA Cup against Newport in December at The Hive, starting the game despite being only 17 years old. The local boy who went to school a mile or two from the Bees ground at Mill Hill County High, actually spent his junior years at Reading before signing for Barnet last season. He has had an outstanding apprenticeship, alternating from centre-back to full-back, and doing enough to become a regular in the reserves and training with Martin Allen’s first team squad.

At Stanmore College, Hakeem is aiming for DM in his BTEC Diploma and is considered “a mature and polite senior member of the group who sets high standards for the others to follow” according to his regional officer, Gavin Willacy.

The Seasiders youth-team captain has already grabbed a hat-trick from right-back this season and turned out for the club’s second string. On the pitch local lad Macauley, loves to tackle and lead by example. Off it, he keeps his head down, and his dedication to his studies has seen him turn a pass profile into distinction level work. In his spare time Macauley has been managing and coaching Lytham Juniors, his local grassroots youth club.

“Macauley is doing wonderfully well,” said LFE’s Simon Williams. “His attitude is first class and you can tell that he appreciates the support of the club and college staff.”

Scottish goalkeeper Jack made his first start in the top of the table clash at Gillingham in mid November. The youngster who has appeared for Scotland at Under 17 and Under 19 level has been on the bench on numerous occasions as cover for regular No.1 Austrian youngster Daniel Bachmann.

Away from the pitch, North West regional officer Craig Skinner has been delighted by the young keeper’s willingness to work in the classroom.

“Despite the obvious temptation to get carried away with his football, Jack continues to work diligently and should achieve a triple distinction on his BTEC Extended Diploma,” said Skinner.

“Jamie has had a great season so far,” said LFE’s Roger Gibbins. “He had a spell on work experience at Barry Town which has had a transformative effect. His confidence has grown and he’s now a regular in the Under 21s.”

“His attitude and focus has also been evident on the education side of things,” continued Gibbins. “He has passed Functional Skills qualifications in English and Maths and is working towards completing his BTEC Diploma and NVQ.”

Centre Forward Alex is another player to get Roger Gibbins seal of approval.

“He shows an excellent attitude to every element of the programme,” Gibbins said. “In the past couple of months he has excelled in the U18s youth cup run and has also been on the bench for the first team, who he trains with on a regular basis.”

“He is also working towards the BTEC Extended Diploma and has achieved Distinctions on every unit. He has already completed his NVQ and coaching qualification,” he added.

Now in the second year of his apprenticeship midfielder Milo has been a model pupil on and off the pitch. Despite featuring for the Under-18s while still a schoolboy, Downey who has been at the club since he was 12 has been unable to make the progress he would have wished for on the pitch but has still shown a fantastic attitude towards training and his education programme.

Having pushed for a move out on loan to a non-league side to get minutes under his belt he has continued to working at Distinction level on his BTEC qualification and added another string to his bow by studying an A Level in Maths.

“Milo is meticulous in his planning and this helps him achieves what he sets out to achieve,” said Colchester’s Education Officer Lewis Spencer. “He has always demonstrated good life and social skills and is a self-sufficient and an independent learner. He is a role model to the rest of the group and also to the Day release boys.”

“He has demonstrated the skills required to enter the working world with confidence and ease. He has suffered some setbacks with regards to his football here but has handled them with class and dignity while remaining focused on the end product. He took responsibility to ask for a loan move so that he could continue his development with minutes playing for a local non-league team.”

“Milo is a level headed lad and never shows any disappointment. He always is polite to both his staff and peers alike. He has been at the forefront of community based activities such as Holiday camps, Christmas lights and the old people’s home visit. He really understands the vital importance of social development.”

“He remains one of the most mature leaners I have worked with within my career and deserves this recognition for the way he has fully embraced the whole experience of the apprenticeship programme with both success and disappointment. He will leave our programme with a University place of his choice, his level 2 coaching qualification, which the tutor called, ‘one of the best sessions in a final assessment’ he has ever seen, a completed NVQ with an excellent range of evidence and above all a triple diploma at Distinction,” he added.

Fulham striker Josh, makes ‘The 11’ after making good progress with the Cottagers Under 18 and Under 21 squads.

“Josh is enjoying his football and his experience at Fulham, he plays regularly with both the U18 and U21 squads and recently played for the first team in a friendly,” said the Luis Nedio, the club’s academy core programme co-ordinator. “Educationally, all his work is up to date and he is on target to achieve a strong grade profile in the BTEC.”

Left-back Josh has already penned a professional contract with the Tigers but is continuing to work well academically.

“Josh has approached his academic work, particularly on the BTEC with a really positive attitude, he is working to a high standard and is on target to complete that and his NVQ,” said LFE’s man on Humberside Paul Bartlett. “Everything was very positive in our recent review meeting and he is a very mature young man.”

“Since being appointed as the Imps Youth Team skipper at the beginning of 2015-16 , Rich has caught the eye with a string of fine goalkeeping performances,” said Damian Froggatt, the club’s academy boss.

“Rich is a role model in his work ethic and leadership both on and off the training ground and his hard work was rewarded with a call-up to the first team squad for a Vanarama National League fixture away at Aldershot in November.”

LFE’s Paul Bartlett added,”Richard has been heavily involved with club’s community work in recent months and has also made great progress on Extended Diploma. He is always positive about his academic work and works hard to represent himself and his club in the best possible light.”

Left-back Noah has had an excellent couple of months on and off the pitch. Noah impressed sufficiently with the Under-18s to become a regular in the number 3 shirt for the Lions’ successful Under-21 side, managed by his former youth team coach Justin Skinner.

That culminated in a first team call-up in November, Noah coming on for the last few minutes of the win over fellow promotion-chasers Bury at The Den. The 18-year-old from East Ham has also “developed massively as a learner and a person” according to Head of Education, Steve Sallis, and is expected to complete the Btec Diploma at Bromley College this spring. He has been at Millwall for six years.

Brandon Mason has received a glowing endorsement from two members of the Hornet’s Academy staff and is another from Ian Smithson’s patch to make the cut.

“Brandon has made big improvements in his covering position and been able to stop passes between him and the central defenders. He has improved his fitness and attended extra sessions which have improved his performances. In the last 6 weeks Brandon he has been a big player for the U21s,” said U18’s coach, Dave Horseman.

“Brandon is making good progress in all areas and seems to have stepped up his dedication to achieving both on and off the pitch,” said Chris Thurston, the club’s education and welfare officer.

“He has expressed a desire to complete the BTEC Extended Diploma which I think is fantastic. In addition, his work rate in lessons has improved and this has seen him keep up to date with his work.”

Smithson added,”Brandon is making good progress on and off the pitch and is highly thought of at Watford.”