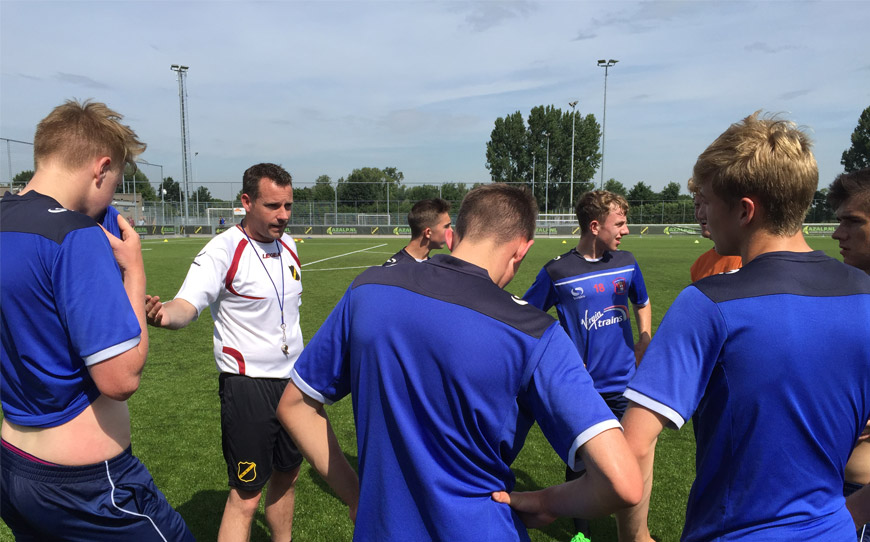 Tuesday was a relaxing day, although we still had to be up for breakfast at 8am – nightmare! After that we took a stroll along to the lake which is 150 metres away from our hotel. We walked around the lake to loosen our legs up ahead of the game that was to take place later in the day.

Before we knew it, it was 3:00pm and time to make a move for our game which kicked off at 6:30. The game was held at Belgian club Waasland Beveren’s academy ground, next to their main stadium, where we took on their Under 17s.

Having beaten Leonidas in our first game, we were full of confidence – but we wanted to make it easier for ourselves this time, instead of giving the opposition a two-goal advantage!

From the kick off, it was clear we had too much quality for them. We were also physically superior with a distinct height advantage. We deservedly went 1-0 up, although it should have been 7-0 with the chances we had! However our striker Kieran Hall couldn’t convert, nor could Arron Bradbury.

And so, with everyone else missing, I decided to take responsibility and rifled a volley into the top corner!

The half ended 1-0. We knew we were the better team and just needed a bit of cutting edge to extend our lead. That came early in the second half from a Jack Egan goal after he beat the left-back, cut in and then slid it under the keeper of Waasland Beveren.

We dominated the game throughout and scored a third through our striker Kieran Hall, who put it past the keeper in style with a one touch finish. Overall we put in a promising performance and did what we set out to do before the game: “beat the Belgians”.

It was smiles all round and the whole squad were in high spirits. And to top it all off, we were treated for our hard work with chips and burgers waiting for us at the hotel, which me and all the lads devoured. No taste like victory!

We had the option to go for breakfast or not, and all the lads decided not to so that we could get a lie in!

The team were looking forward to today due to the footgolf competition, which was controversially won by Kieran Hall (below), with a score of just 73! It was great fun all round and very competitive, as it always is with our bunch of lads! After we all finished we watched the coaches compete in their group, and just as Vince Overson (our coach) was about to take his shot on hole 15, he grabbed a branch and was stung by a wasp on the palm of his hand. We shouldn’t have laughed about it but we all did anyway!

Afterwards, we had a quiz, with four teams competing and Alan Moore (academy manager) as quizmaster. The winners got to pick one player to serve them dinner, walk to training and do all the equipment every day! Thankfully, I was on the winning team along with Morgan Bacon, Cameron Salkeld, our physio Jordan and Rhys Groves. We all chose a player to be our slave for the next few days, mine being Carl Taylor. The other lads picked were Matthew Douglas, Ellis Pearson, Joe Breen and Kieran Hall. These decisions have proved good so far as me and the rest of the lads haven’t moved and made them do the lot. I have always wanted a personal assistant!

The following day, we were to be coached by Dutch coaches, which isn’t something that happens very often so me and all the lads tried to be at our best to show what we have got.

We started with a passing drill, which was focused on movement and first touch. We then progressed onto a shooting drill which was done as a little competition in teams. Unfortunately my team got beat all three times by a single goal, which was hard to take for the lads, but we enjoyed it a lot as it was meant to be a bit of fun for us!

We then went onto playing mini games: first years v second years. All in all I have loved being coached by the Dutch coaches as we have learnt about their philosophies of football.

For the rest of the night we are going to chill out and relax, to be ready for our training session in the morning, which will be based on tactics before our big game against NAC Breda U19s on Saturday. Me and the boys can’t wait!