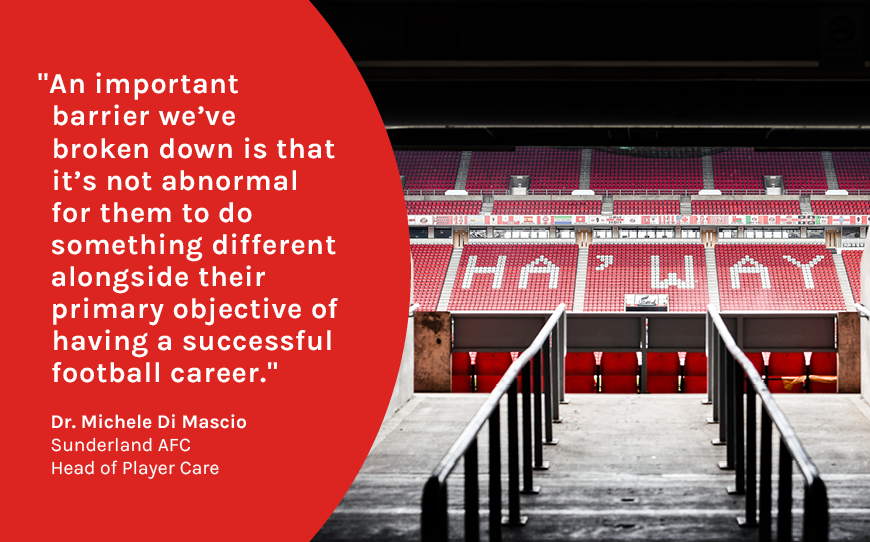 Since its establishment in 2004, League Football Education (LFE) has been delivering the Apprenticeship Programme to 16 to 18-year-old players at EFL clubs.

As part of its commitment to the educational side of the apprenticeship, LFE also supports clubs with the formation of a life skills strategy that is designed to provide a programme of online and face-to-face delivery which covers a range of topics aimed at helping young footballers become more well-rounded individuals. The Life Skills programme ties in with the personal development and transitional elements of the apprenticeship, which explore things like emotional well-being, faith, finance, mental skills, social media, transferable skills, road safety, and more.

Sunderland AFC is just one club that has been utilising the life skills and personal development offerings to encourage their Academy players to broaden their skill-set as both a footballer and person.

In a recent article published in Sunderland’s match day programme, The Black Cats’ Head of Player Care, Dr. Michele Di Mascio, shared an insight into how he and the rest of the backroom staff have implemented the Life Skills and Personal Development programmes on Wearside.

“One of my key roles within the club is to look to encourage players to explore their interests off the pitch. An important barrier we’ve broken down is that it’s not abnormal for them to do something different alongside their primary objective of having a successful football career,” Di Mascio told the club website.

“Having those other interests is vital for these players’ personal development and it can positively affect their mindset, and consequently their career on the pitch. So, what’s also just as important is never to force something on the players that they don’t like. That’s the key part of what we do – we’re looking for something that suits and benefits each individual, and we keep exploring until that can happen – providing that’s what the player wants.

“We aim for it to help their transition, whether that be from Under-18 to Under-23, or a push into the first team, or even to be one step ahead for a player’s exit strategy should they, unfortunately, be released in the future. We’re looking to invest in the futures of these players both in and out of football, and the lads here have been very receptive to that.”

One player, Ethan Kachosa, has been a regular in the Under-23 setup this season, having signed from Leeds United in the summer, before making his debut for the first-team last October. The 19-year-old has maintained a long-standing interest in sports media, leading to him building connections with some of the country’s most experienced sports journalists and running a diary feature for Red & White, the official SAFC matchday programme.

“I have always been interested in writing, especially about football. I see it as a keen passion alongside my football career, so wanted to put that into action and grab the opportunity straight away,” Kachosa said.

“Sometimes, away from football, you have a lot of time. I’ve always believed it can be beneficial for us all as footballers to explore other interests that can stimulate your mind. It can keep you focused, productive and benefit you as a player as well as a person.

“Having role models in the game who have achieved things away from football has always been a big help too, and I’m so appreciative of how Michele and people at the club have encouraged and provided me with opportunities to pursue this interest.”

Zak Johnson, a first-year apprentice, is another youngster that has bought into the programme that Di Mascio has helped shape. Johnson has established himself as a regular for the U23s this campaign, as well as appearing in a handful of first-team squads. The midfielder made his debut alongside Kachosa in the Papa John’s Trophy tie with Manchester United last year.

Johnson – who was still at school this time last year – has recently begun a period of work experience as a teaching assistant at Barbara Priestman Academy, helping with the tuition of children with additional needs. This arrangement was assisted by the Foundation of Light, whose hard work alongside the club for the community continues to excel.

“Michele offered an opportunity for four scholars to do some work in local schools, and I jumped at the chance – helping young people is something I’ve always had an interest in. I felt like the role was something I could excel at,” Johnson said.

“I specifically asked to go to Barbara Priestman – I have cared for my brother growing up, and I feel like this was a fantastic opportunity the club provided that can really benefit my own development.

“What I think is very important is to remember that whilst first and foremost you’re a footballer, striking that balance and being productive from an early age is vital. I’m looking forward to seeing where this project goes next.”

Oli Bainbridge is also an established Under-18 player and has in recent months taken an intrigue to develop a fashion brand, liaising regularly with SAFC graphic designer Alex Middleton.

“I echo what some of the other lads have said around having something healthy to pursue to run parallel to your playing career; the club have really helped me in the last few months to realise that fashion design could be a real interest to explore,” Bainbridge explained.

“Football is my main passion – that’s why I’m here and that’s important to remember, but I have been inspired by podcasts I’ve listened to and conversations I’ve had with Michele and the club.

“The work experience has helped my confidence that I can make something happen with this project – something that a lot of successful footballers have done already.”

Those that Bainbridge alludes to in the fashion industry include the likes of Jesse Lingard, ex-Sunderland man Danny Graham and the late Marvin Morgan, whose legacy built from founding clothing brand Fresh Ego Kid will be long admired.

LFE Life Skills Manager, Simon Williams, commends the endeavour of the club’s Player Care programme in how it helps develop young players off the pitch:

“Sunderland do a great deal with us – other clubs are now beginning their journey in terms of how they encourage young players to broaden their horizons.” Williams said.

“People like Michele have raised standards in that regard, and we’ve had our own programme in place since 2004 which now means this generation of young players now hopefully only know the way of exploring their positive life and career interests.”

“We challenge players to do things outside of football for the benefit of both their football careers and personal attributes,” French added.

“What Sunderland do with us is very encouraging, with some examples of young players progressing really well.

“Having that down-time and investing time elsewhere – whether that be business, music, fashion, anything – can really assist these players and we have to work in tandem with clubs like Sunderland to continue to encourage this progress.”

Di Mascio rounded off the interview with a telling statement, which demonstrates the movement in the right direction for players’ personal development:

“In years gone by, U18 or U23 managers may have been reluctant with the perceived interference of Player Care or Education staff to encourage external work experience, but now we’re seeing a shift in attitude.

“The culture is changing for the better, and this will only serve to help our Academy players in the future when it comes to exploring or assessing their options, and enhancing their life skills.”