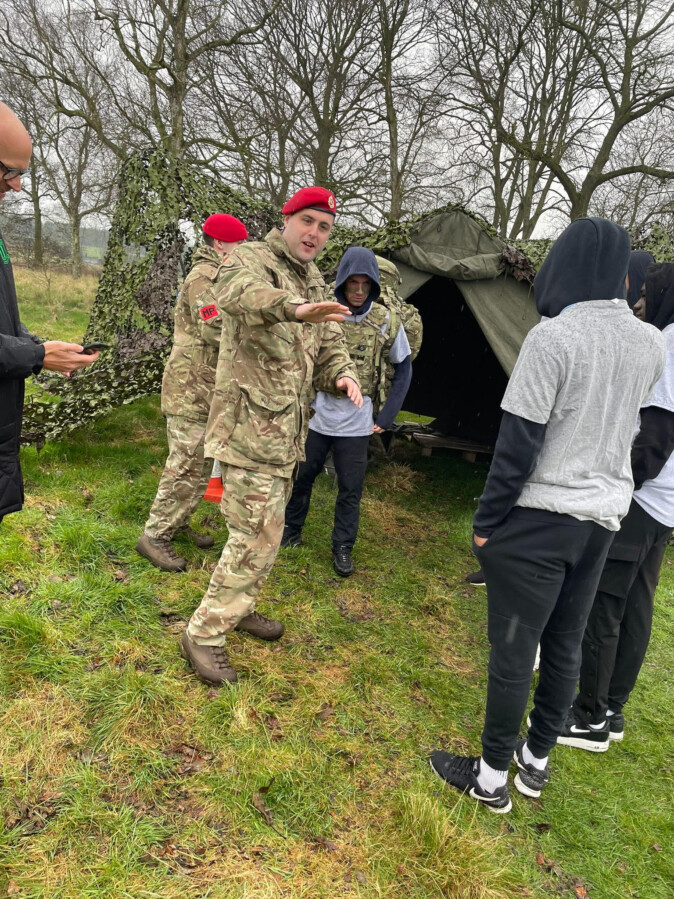 Stoke City Under-18s were put through their paces during last week’s visit to Parsons Barracks in Donnington, Telford, where the players participated in a range of team building, problem-solving and educational activities.

The event was organised by LFE partners, The Royal Corps of Signals, who are the British Army’s information and communication specialists.

While it was a valuable transition event, in which players got a real-life insight and learned about apprenticeships and degree-level funded education and career opportunities, it also served as a personal development and team-building activity.

Under 18’s Coach and Player Care Officer Danny Pugh was pleased with how the players adapted to the environment and the impact it had on them as a group:

“I was not sure how they would take to it, but from the start, they were all really involved and threw themselves into it. The staff were excellent with the players, from the way they communicated and their demonstrations. The next day the players were still on a high, talking about the different things they were doing and how each of them coped with each scenario,” he told LFE.

On arrival, the players broke off into two teams of five and were taken through six different activities, from dealing with road traffic accidents to coping with the physical demands of carrying heavy rucksacks and working through assault courses. Each scenario demanded leadership to find the best way to solve a situation and Pugh, who kept a close eye on the young Potters throughout, noticed some individuals stepping up.

“The activities encouraged players to take ownership of a situation, organise one another, and give and take orders. Personalities started to come out, they relaxed, and players that you might not see as leaders took control of situations that they would not have at the training ground.

“In a way, it was very relatable to the leadership qualities you need on the football pitch, giving out key pieces of information. It provided lots of different experiences – was very hands-on and they were fully immersed in it.

“I am new to the role, so it gave me the chance to see them in a unique environment and I was really pleased with how they bought into it. They spend five days in the building with us, with a structured routine of football and education, so each day can be very similar for them. This provided something completely different – it got them out of their comfort zones, away from training ground and college, and gave them a real eye-opener.”

As part of a wider commitment to transition, LFE offers career opportunities to apprentices through partnerships with external organisations such as The Royal Corps of Signals. Alongside the opportunity to study for qualifications through apprenticeship schemes and degrees in information technology and cyber engineering, The Royals Corps of Signals career pathway also encourages soldiers to pursue their sporting ambitions and hobbies throughout their careers.

The Royal Signals Football Association, for example, is one of the most successful outfits in the British Army, boasting alumni of Scottish and English Leagues, FA Cup and World Cup winners, as well as having a strong representation at both Army and UK Armed Forces level.

WO2 Barry Rizza, who is an ex-Inverness Caledonian Thistle footballer, and WO2 Lee Fraser, are delivering the STEPS programme; an initiative formed to help young footballers transition into an army career using the traits they have acquired during their footballing journeys. Through the partnership with LFE, Barry and Lee visit academies around the country and help organise career events for the players to gain an insight into the opportunities available.

Speaking to LFE about the work he and Barry are doing, Fraser said: “We did a lot of research and we recognised the lack of pathway for released academy players and, from that, produced the STEPS programme that we have been building ever since. The STEPS anagram takes you through what the programme offers: you become a soldier, get trade skills, experiences, personal development and sporting success.

“Our most recent success story is Tom Broadbent, who came to us after being released by Bournemouth earlier in his career. In 2017, he was the left-back in the army football team. He came away from the army with lots of football experience, confidence and was a top athlete, and ended up signing for Bristol Rovers, before winning promotion with Swindon Town in 2020. His journey with the army is fantastic and is a fitting example of the opportunity that we can offer. A lot of young footballers are well equipped for an army career, because of the great work academies do with them from a young age.”

And like Pugh, Fraser was delighted with how well the Stoke City youngsters engaged with the activities.

“The career days give the players a really good insight and it was great to see how much Stoke City enjoyed the day,” he said. “The feedback has been really positive. They threw themselves into everything and that is something that we find with all of the academy players. The coaches are watching them and they naturally have that competitive edge.

“When we ask them questions, what we usually find is that most do not know about how much sport you can play in the army, the number of jobs there are and we discuss the stereotypes, like how dangerous it is.

“It is not about recruiting soldiers; it is about opening their minds up to different things and getting them away from the training ground environment. We want them to think about a plan B and the importance of having a plan B in their back pocket.”

In his new role, Pugh not only looks after the apprentices’ football development but also supports released players with their transition via a three-year tracking and monitoring process. Something that the former Premier League midfielder is keen to encourage his young Potters is exploring other interests away from the game.

“We want to make them all professional footballers, but we are aware that that can’t happen,” Pugh explains. “It is important that these young players understand that there is no harm in having other interests away from football. You have so much time on your hands while you are playing, so using that spare time to explore and make yourselves aware of other things, whether you are going to stay in football or not, can only be a positive thing.

“We will do things like this, the education side of it, cooking lessons, but also, we are looking at the transitional phase. When they leave the club, whether that is to another team or another career, my role is to help them with that next step. Through the tracking and monitoring, it will be a case of looking at ways we can help them – there is a real sense of responsibility to do that across the board.

“It is something we want to grow over the next few years and events like this tie into that commitment.”