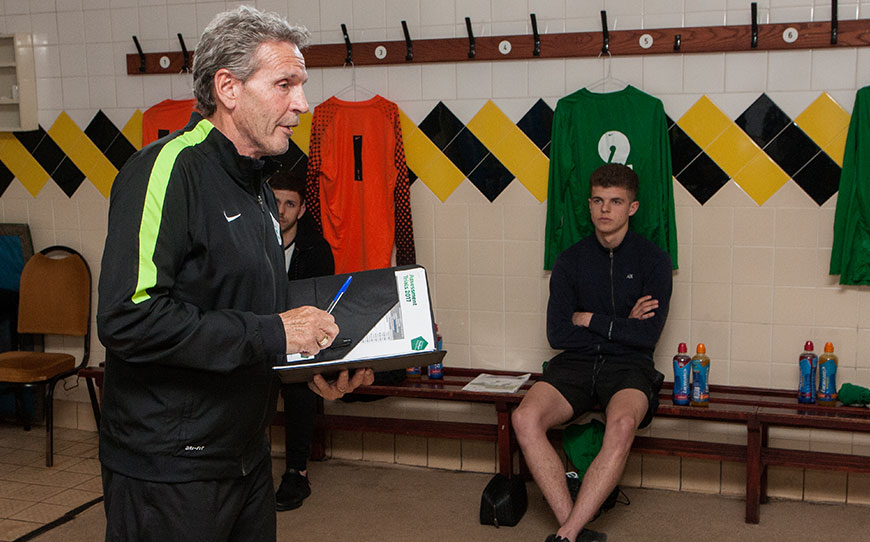 Loughborough University Football Programme Coordinator Mat Stock admitted he was impressed with LFE’s Assessment Trials, which hosted over 200 apprentices bidding for interest from scouts of clubs and Universities.

As regular visitors to the annual event, Stock was in attendance to observe two future Loughborough alumni, while also scouting for further potential recruits.

“There’s some good players out there and we’ve actually got two players that are coming to the University this year, so it’s quite good to see them play,” he said.

“We want to show our face and I think LFE are really good at helping the players about what the next steps are and if they get released from their clubs and then hopefully we can link up with LFE and help the players progress on, get a degree and then potentially get back in professional football afterwards.”

Universities face a tough task in battling with clubs for the commitment of players, with around 10 per cent taking up higher education placements after their apprenticeship, but Stock expressed his confidence in Loughborough’s ability to attract new students.

“At our University, we have some of the world’s best facilities,” he continued. “We’ve got fantastic training facilities, grass pitches, artificial pitches, we’ve got a power-based gym which is for athletes for British Athletics, so anyone in our football programme gets time for those.

“We’ve also got the new Cardiovascular gym which our athletes can also use, we’ve also got fantastic support services, so we have strength and conditioning coaches, performance analysts, a physio department and everyone part of our football programme gets these services throughout our Non-League and BUCS season, so hopefully the facilities that we’ve got and our services can get players in and hopefully we can support them as well.

Aside from those who already applied, the Assessment Trials provide Universities with the invaluable opportunity to promote themselves to a larger pool of players.

“It’s brilliant because we can get our name out there and it’s spreading the word about what University football can offer different individuals,” Stock said. “There are four Universities here today, so we all know each other and basically it’s a good platform for us to market ourselves and show what we can offer players who have been released.

“I’d say this year if we’re looking at recruitment we’ve had about 20 to 30 applicants playing in the academy setup that have asked us about courses across different areas in sport, business, everything like that really. They’ve asked us about that and hopefully we can get them across the line and into University.

“With preseason starting earlier than our academic year it’s good to see them before that starts. So basically we look at players we already know about and then if there’s anyone else then we’re more than happy to answer questions on what Loughborough Sport can offer individuals, so we’re happy to speak to parents, players, anything to help them on their next step.”

“Players released by EFL clubs are an attractive proposition for universities because their talents have been honed in academies over a number of years and you know that you’re going to get a certain standard of player,” Gibbins said.

“In previous years Loughborough’s squad has been packed with former apprentices, who also get the best of both worlds, in respect of being able to attend a renowned university to develop academically, and by being able to take advantage of outstanding sports facilities.”