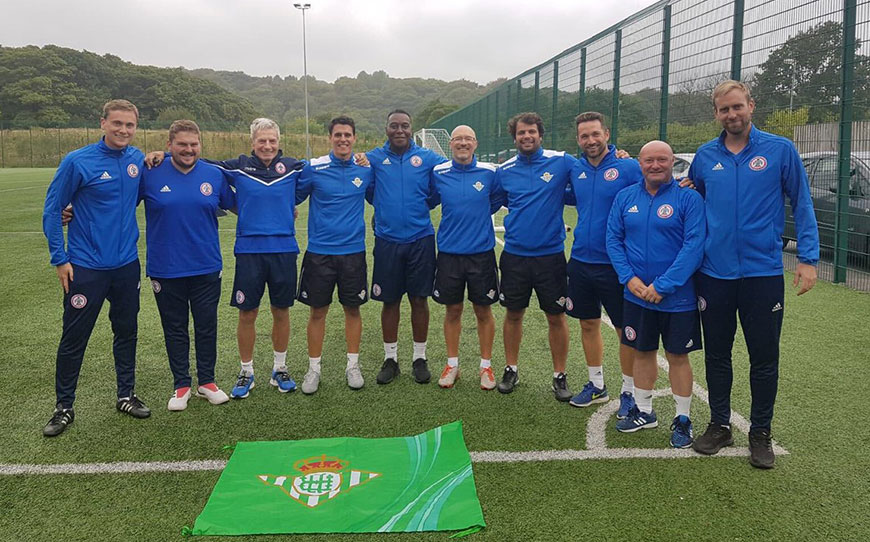 As a result of LFE’s Erasmus+ Coaches Trip to Spain last November, Academy staff at Accrington Stanley and Real Betis have established a partnership to exchange ideas and provide new and unique opportunities for players and coaches.

He told LFE: “It was a brilliant trip. I think it’s vital that anyone that wants to improve themselves and improve their Academy has got to look for these opportunities.

“We spent some time with the Andalusian FA, Malaga, Granada, Sevilla and Real Betis and it was while I was out there with Real Betis that I spoke with Alberto Martín, the Head of Methodology. We looked around their facilities and watched them train.

“When I got back to Accrington, Alberto got back in touch and said he’d be interested in seeing what we’re like at Accrington, so we discussed whether it would be viable to create some kind of collaboration, with the two clubs becoming partners.”

After months of conversing, the first step of the affiliation took place at Accrington & Rossendale College as players from the Under-7 to Under-15 age groups took part in a five-day camp, with football drills led by Betis youth staff and supported by senior coaching staff from the Stanley Academy.

“We’ve had over 60 kids training with us and that’s gone really well,” Fearnhead said. “With it being a different voice and the coaches being from a different country, it’s interesting for the players.

“The coaches worked on different things. One focused on coordination activities and some technical work, one worked on positional games and another specialised in match situations and the players have had the opportunity to work around the different sections, so it’s worked really well.

“In the future, we’ve talked about players maybe coming here on loan or players who aren’t contracted at Betis being able to come over and trial with our youth team, as well as coach internships.

“We’re looking at maybe sending some of our coaches out there, their coaches coming here and learning from each other. Hopefully we can take it further and continue growing the partnership.” Even prior to the link with Betis, Stanley have organised numerous trips in recent years in a bid to develop playing and personal skills by exposing their young footballers to new ideas and cultures.

“We’ve tried over the last few years to take teams abroad,” said Fearnhead. “We’ve been out to Paris, we’ve had a team out in a tournament in Las Vegas, we’ve been to Madrid twice and the youth team went to Holland last year through LFE’s pre-season trip.

“We’ve got another group lined up to go to Madrid again in October and then, having talked to Alberto, we’re looking at maybe taking some groups out to Betis at some point in the next season or two.

“The culture is important and the wider learning that the players can get from things like this is really important. The players have started greeting the coaches in Spanish. It’s simple things at the minute but hopefully we can help players develop a curiosity for learning and try to develop themselves in other ways as well.

“All the boys here want to be footballers, we want them to be footballers, but it’s unrealistic to think that every player in our system will go through and all make it as professionals. We need to educate them in as many areas as we can and help them develop confidence and a positive mindset which can help them in other areas. Languages would be one of them and it’s a great opportunity for them. Experienced Betis coach Martín also spoke highly of the experience and echoed Fearnhead’s desire to formulate a long-standing link between the two clubs.

“The most important thing I can learn here is the opportunity to share knowledge with the coaches,” the Spaniard told LFE. “I can get different ideas about the English understanding of football, which we can then apply back at Real Betis.

“The sessions on organisation and structure are very interesting for us and it is also good for Accrington because we can show our methodology, so they can learn too.

“In Spain, the players are a little bit different because I teach control and pass, whereas the first step here is to dribble the ball, so the skills that they learn are a bit different. The aim of our drills was to create different techniques for keeping the ball, with positional games.

“We want to continue this plan because it’s very interesting for both clubs to interchange knowledge and to provide new opportunities for players and coaches with internships going both ways.

“We must also remember that not everyone becomes a professional player and it is important for them to develop personal skills, like learning other languages.

“During this visit, I have tried to teach some Spanish words and phrases to the children and the coaches and I have been working on our English.”

The next LFE Coaches Trip – fully subsidised by the Erasmus+ fund – will take place in February 2019. Applications close at 17:00 on Monday 19 November. For more information, click here.

This story features in Issue 36 of LFE’s Touchline magazine.