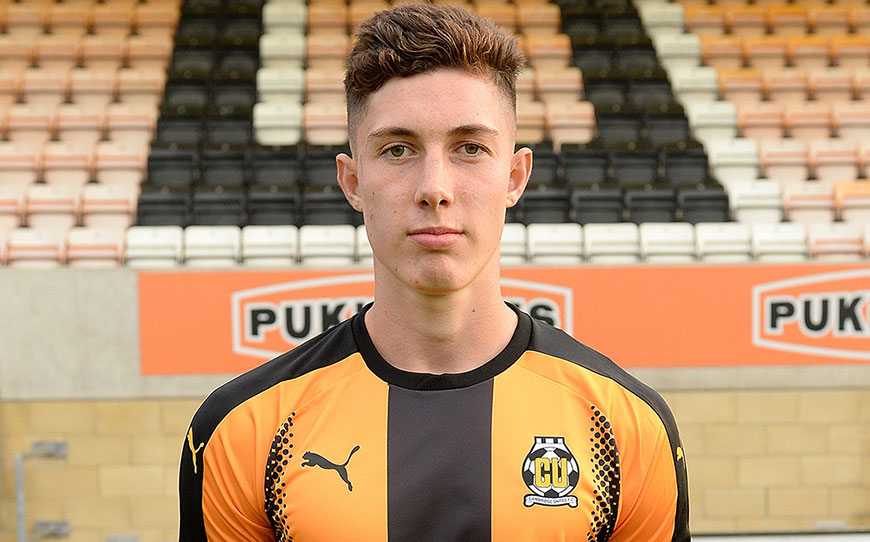 Cambridge United second-year apprentice Sam Squire has been knocking on the door of the first-team this season after featuring in pre-season matches against Royston and Norwich City last summer.

However, it is off the pitch where the 17-year-old has gone above and beyond, finalising his Extended Diploma early and attaining Distinction grades across all of his units, setting him up for a triple distinction star grade overall.

Since completing his BTEC, Squire has conducted volunteer work with the Cambridge United Community Trust, working with them on a mental health and well-being program that is being delivered in schools local to the club.

Here, he talks to LFE about his ongoing commitment to spreading awareness of mental illness as he strives to help those in need:

Working hard on your education gives you a platform for consistent commitment that you can then take into your approach as a player. The stuff off the pitch like your education, how you are as a person, how you speak to people, how you present yourself, I think you take all that onto the pitch subconsciously and that’s how you develop as a player.

I find things interesting related to sports psychology and sport science and in my first year, I was doing a lot of travelling, so I just wanted to use my time a bit more efficiently and effectively by reading books and developing my mental state that can then enhance my game on the pitch. Being involved in football, you’ve got to be ready to tackle setbacks and make sure you push through them and that’s when your mental strength comes into action.

A few years back I experienced hands on what mental health can do to a family member and you think ‘how could I have noticed this and how could I have helped’, so that really spurred me on to get involved with the Cambridge United Community Trust. If I can help even one person, whether it be a child or an adult, to just open up about their negative mental thoughts that can really affect your life, that’s my motivation. I’ve been working in schools, doing talks in assemblies and talks at the community trust centre.

I’m in a video presentation that the kids watch and when I go into the schools it’s just really nice to see how the children take it in. It’s really nice to get some positive feedback and also to listen to some of the children speak out about how important mental health is to them and what it means and how they can develop themselves to become better people in and out of school.

I probably don’t think about it at the time because it’s something I’m so passionate about and it comes very naturally, but talking to people you don’t know and standing in front of a group of 100 children or doing talks for the club’s fanbase can be out of some people’s comfort zone. It’s those sort of things that develop your character, which you can use as building blocks to becoming the person you want to be and improve you on the pitch.

When you see kids that love the game and love the club and they’re taking a real interest in what you’re passionate about and what you’re trying to provide them, it’s really nice to see. My goal is just to help one person’s life and if I can improve their way of thinking and have a positive effect on one person, then that’s my job complete really.

I’m also planning to get involved with other projects that the Trust deliver. They cover so many other areas like Dementia and cafes that open up for the elderly to meet to make sure they’re not stuck on their own. On the pitch, they’re setting up football sessions for the blind, people who are deaf and people with autism and other disabilities, so there are loads of different things that are happening with the Trust and it will continue to grow.

It’s quite heart-warming when you see you’ve affected someone’s life in a positive way and I don’t think you can ever experience a better feeling than that, so whether it’s getting involved with your local community or any other volunteer work, whatever you’re passionate about, just try to make a difference and you’ll definitely notice the benefits for yourself and the cause you’re promoting.

We recently had our first ‘Time to Talk’ Mental Health Awareness Evening, with speakers from a number of local organisations like The Cambridge Samaritans. It was great to be surrounded by so many inspirational people, whether that be the people speaking or people in the audience.

There’s a woman called Ruth Fox who plays for Cambridge United Women’s team. She spoke about her battle with depression and attempted suicide and it’s been ongoing until very recently, like six months ago. It’s just amazing to see how someone can transform their whole life and change such a traumatic time into a positive within the space of a few months. Someone else in the audience towards the end of the night talked about how her son had committed suicide and no one knew he was dealing with any issues. He appeared to be fine but obviously he was hiding his demons. It’s just about trying to keep spreading awareness. Someone may seem as their normal self but obviously you can’t read someone’s mind.

When I first started my apprenticeship, I said to myself ‘I don’t want to have any regrets’ and I feel I’ve made the most of every opportunity that’s come my way, so I know that whatever happens, there will be a pathway somewhere for me to go. I’d ideally like that path to involve football in some way but if it’s not, I know I’ll still have a route to go down that I’m passionate about and give me the drive to be successful.

I’ve become more mature, I’ve recognised how important mentality is in football and in becoming the best person you can be, and I think that’s what the apprenticeship has made me realise. The fact that I’ve been offered a one-year extension to my contract means I can continue and because I’m not at college any more, I’m hoping to do even more from the start of next season.