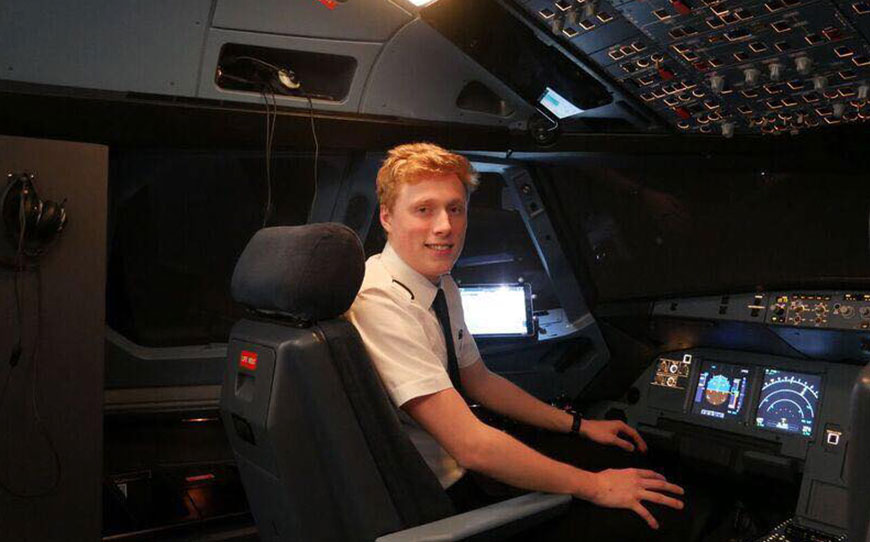 Back in 2014, York City were flying high having reached the Sky Bet League Two play-offs. For Ollie Smith, it signalled the start of a new adventure as he was released at the end of his apprenticeship with the club.

And while York’s fortunes have dipped since then, with consecutive relegations sending them down to the National League North, Smith’s career is taking off after pursuing a route into aviation.

The 24-year-old has spent the last few years training to become a pilot, gaining around 300 hours of flying time under his belt and securing a job as a Boeing 737 first officer for a popular budget airline.

He told LFE: “Once I got released, I probably spent six months to a year considering my options. I went to a couple of careers events and doing pilot training was always in the back of my mind, but I wasn’t sure if I could do it.

“There are financial implications to overcome, but you don’t have to be super rich – there are ways to get the funding, which you can look into. I emailed someone at the PFA and they got back to me within a day. They made funding available to me at certain intervals during my training, which was a massive help.

Anyone who is willing to work hard and commits to the training is capable of flying an aircraft.

“People always say ‘you must be really clever’ but that’s not the case, I’m just average academically. You have to be prepared that it’s going to take a couple of years, but the reward of being an airline pilot is great.”

Smith decided to take a modular route to completing his training, which started with earning a private pilot’s licence at his local flying club. A distance learning Ground School course followed before spending four months in Poland for Advanced Flight training, while he concluded with a Jet Transition course back in the UK.

“My first flight was around three years ago,” he said. “I was visiting a flight school and they asked ‘have you been in a light aircraft, are you sure you’re going to like it’? I did about an hour being taught the basics of maintaining a level flight and things like that and it was really good. Once I went up in that aircraft, I knew straight away it was going to be the career for me.

“In order to go from your private licence to commercial licence, you have to do hour-building, which means you have to fly a plane by yourself and I’ve done about 100 hours of flying solo.

“You can just rock up at your local airfield, have a look at the weather and think ‘where should we go today’? I’ve had some great trips up to Scotland and the Lake District. I’ve taken my parents up and my girlfriend as well, so it’s a great option to have.”

After completing his flying training, Smith quickly secured a co-pilot role for short-haul flights across a range of European destinations.

“Thankfully, the job market is really strong at the moment,” he added. “I applied for about 10 different companies and I think I had offers from four of them, so there are plenty of jobs available.

“My schedule is quite stable – five days on and four days off. We’ll turn up 45 minutes before our first flight, print off the flight plan, check the weather, go out to the aircraft and then we’ll fly to a destination, try to turn it round in 25 minutes and fly straight back. We’ll have two or four sectors and always end up back at home base.

“For some companies, you can do trips around Europe. If you’re long haul, you generally spend two or three days in a place, so you do get to go sightseeing and then come back. It’s a perfect industry if you want to travel the world.

“Due to the fact that you are limited with the number of hours you can fly – because they’re conscious about fatigue and stuff like that – you do get quite a lot of time off. I definitely think my working pattern is favourable in comparison to some other jobs.

In my current company, there are opportunities to move into instructing after a couple of years and then you can get the commander upgrade and become a captain. That’s the sort of progression I’m looking at.

“You can progress even further from there and eventually move off the flying into more of the training aspect, which is something I might consider further down the line, or if I wanted to go long haul I could maybe look into that as well.”

Although the former Academy player has now hung up his boots in favour of a life in the sky, Smith insists there are qualities he developed as an apprentice that help him in his flying career.

“It’s a totally different industry, but I think that football prepares you very well,” he continued. “I generally prepare for a flight in the same way I would’ve done for a big game, in terms of eating well and getting the right amount of sleep.

“Handling nerves is another thing that you’re prepared for as a result of being an apprentice. You’re going to be nervous before a game or a trial or something like that, so going through that as a footballer definitely teaches you how to handle that.

“Leadership is also quite key in both industries, as is communication and teamwork, because you’ve got to work together as a unit to perform well. If you learn those sort of skills, they certainly transfer into aviation.

“Taking the BTEC seriously and getting good grades unlocks so many doors. Not only due to the UCAS points that it offers, but it also gives you the confidence to think that actually you are capable of doing well in further education.”