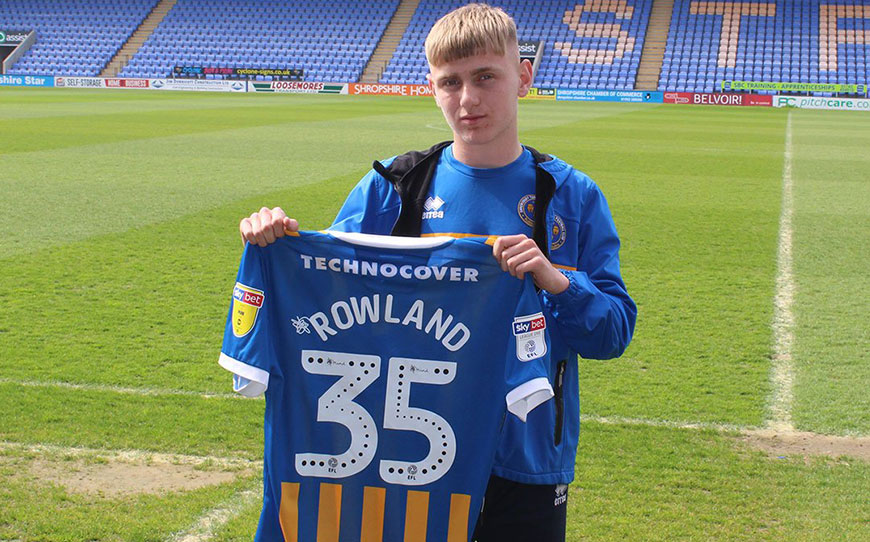 The promising midfielder James Rowland experienced senior football for the first time in November when he came off the bench for the final 20 minutes of a 2-1 Checkatrade Trophy win at Crewe Alexandra.

A fortnight later, the 17-year-old gained further action with a late cameo against Walsall before making his full debut in a 1-1 draw with Port Vale, where he was named man-of-the-match following a standout display.

Rowland was also included on the bench for Shrewsbury’s FA Cup ties with Stoke City and Wolverhampton Wanderers, although he was not introduced during either fixture.

He told the club website: “It feels really good. It’s something I have been working toward. I am happy it’s all done now. I’ve been with the club a few years now and it has been a great place to be – I am happy to be here for at least another two years. It’s massive for me and the family, they are really proud. They’ve been taking me to games from a very young age, so I am very happy for everyone.

“It has been a long journey. I started football when I was six and went to West Brom and then Shrewsbury. It has been a hard two years to get here but I am happy it’s here and happy to have signed the contract. It’s a good feeling but I need to keep kicking on. I want to try and get into the first-team if I can.

“I want to get as many first-team appearances as I can and play for this club. I’ve had good advice when training with the first-team and had good feedback. I want to improve as a player for next season. I feel I have a lot more to give. I am working hard to be a better player and hopefully, I can get into the first-team.”