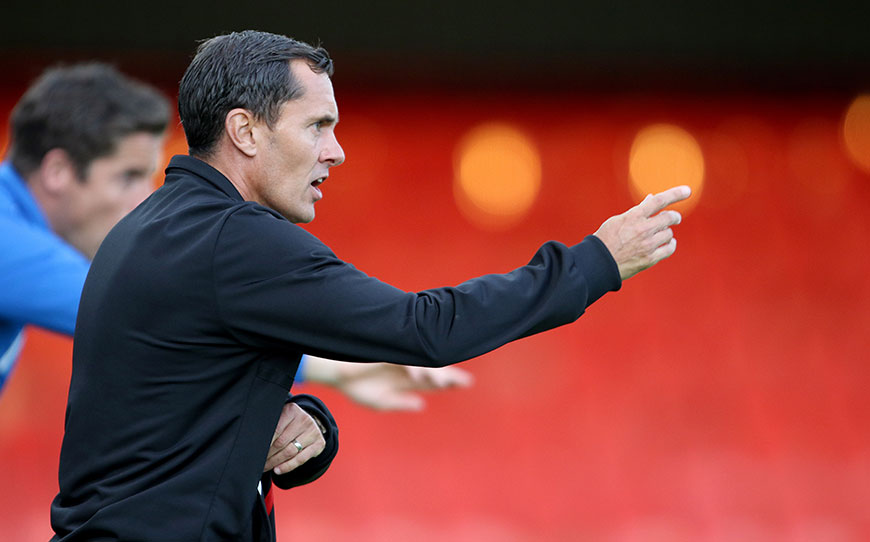 The Shrewsbury Town, academy manager, Andy Jones has lavished praise on first team boss Paul Hurst (pictured) for his work within the academy since he joined the club.

Current apprentices, Ryan Sears and Ryan Barnett have both regularly been involved in Hurst’s match-day squads over recent weeks and the manager has also frequently attended Under-18 games.

Jones believes that Hurst’s actions demonstrate a clear endorsement of the club’s commitment to youth development.

“I keep saying how great the gaffer has been with utilising the young lads and it’s been a great experience for them both.

“The gaffer normally sends himself or someone else to watch the youth team games, and it’s good for the lads. It’s good for them to have a bit of pressure on them to make sure that they’re performing well.

“The communication between myself and the gaffer has been very good since he arrived at the club, the lads have got an opportunity and it’s up to them to show him.”

Jones is also confident that Sears and Barnett, who recently penned a professional deal will not be the only academy players to force their way into first team reckoning.

“We’ve got some other very good players in the academy who will hopefully come to fruition very soon, it’s a tough time and they’re all working really hard.”

Barnett, still only in the first year of his apprenticeship recently put pen to paper on his first professional contract.

The 17-year-old agreed a two-and-a-half-year deal with the option of an additional year and was delighted to be extending his association with the Shrews, which began at the age of 8.

“When I started my scholarship I didn’t expect to be offered it this early, but it’s obviously a great moment for me and I’m really happy,” he told the club’s website.

“I’ve been pushing on this year and I’m glad that all my hard work has paid off. When I was eight it seemed like a very long way away, but you’ve just got to work hard every single year and that’s what I’ve done and finally got that goal.

“Every year I’ve had different coaches and all of them have helped me in different ways by setting me different targets, helping me improve as a player and I’m very thankful for that.”

??“I can play most positions”, he continued. ??“I’ve got a lot of developing and improving to do. I’ve nowhere near made it yet, but I’ve got time to do that. I’ve spoken to the Gaffer about what I’ve got to improve and I’ve got to try and get in the team now over the next three years.” ??

Barnett, reserved a special mention for the support he has received from his parents on his footballing journey.

“All the miles my dad’s put in in the car and my mum supporting from back home, it all feels like it’s worth it and I feel like I’ve done them proud,” he added.