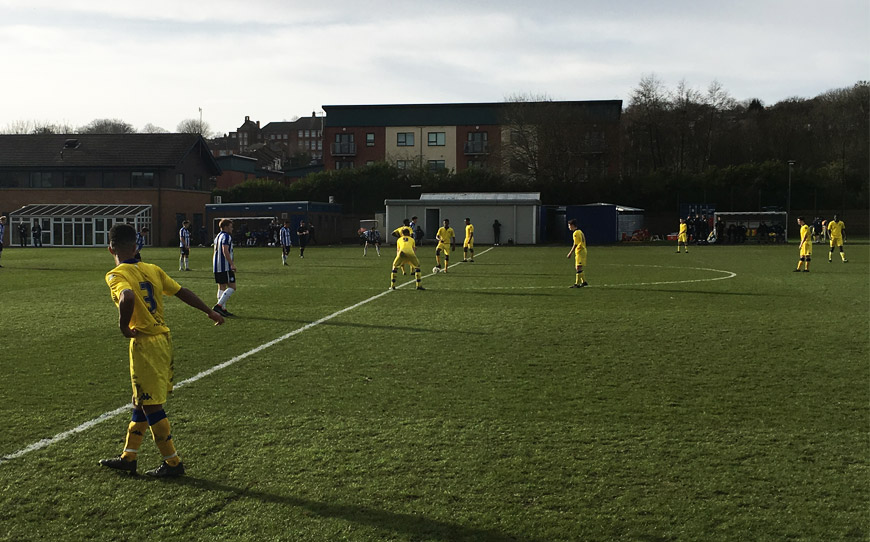 Despite twice going in front Leeds were unable to hold on and Swaine grabbed all three points for the Owls shortly after entering the pitch as a substitute.

“Winning in the last five minutes was a good result for us,” said the Wednesday Under-18 coach, Paul Murray. “I felt we were good in patches, we had to work so hard for our goals.

“Then simple goals we let in are really cheap goals. That’s something we definitely have to address, but I thought our goals were fantastic, the build up to the goals were brilliant.

“We’ve had umpteen chances in the game, we could’ve probably been up 4-0 before they scored,” the Owls coach added.

Murray’s team started on the front foot and Leeds were thankful that keeper Will Huffer reacted smartly to deny George Hirst from 5-yards out.

The Owls continued to pile on the pressure, but the visitors weathered the storm. Jake Nicholson’s right-footed shot was cleared off the line in the 18th minute.

Despite coming into this without a league win in eight outings, it was Leeds who found the opener. Malik Wilks broke and found himself in acres of space on the byline. His precise pass found Bobby Kamwa, who made no mistake finding the bottom left corner. That proved the jolt required for Wednesday to level and Hirst responded eight minutes later.

With the score evened up the intensity suddenly ratcheted up a notch with some fierce challenges being committed by both sides. Leeds Brazilian winger Ronaldo Vieira was sanctioned with a yellow card after one particularly hefty tackle.

John Anderson’s men snatched their second goal of the game four minutes after the restart. Wilks was again the catalyst – though this time he turned from supplier to scorer with a 20-yard strike that found the bottom left corner.

“We just told them to believe in themselves a little bit more,” Anderson said. “Malik’s got that in his locker. He’s a good player, he scored a good goal and he’s always a threat for opposition defences.”

Leeds joy was short-lived as Wednesday stormed back to equalise two minutes later. Hirst contributed again and unselfishly squared the ball to Warren Clarke who tapped it into an empty net.

With honours even a draw seemed about right but a late substitution proved clinical for the Owls. Swaine had not long entered proceedings when he found the time and space to apply a measured finish that secured all three points.