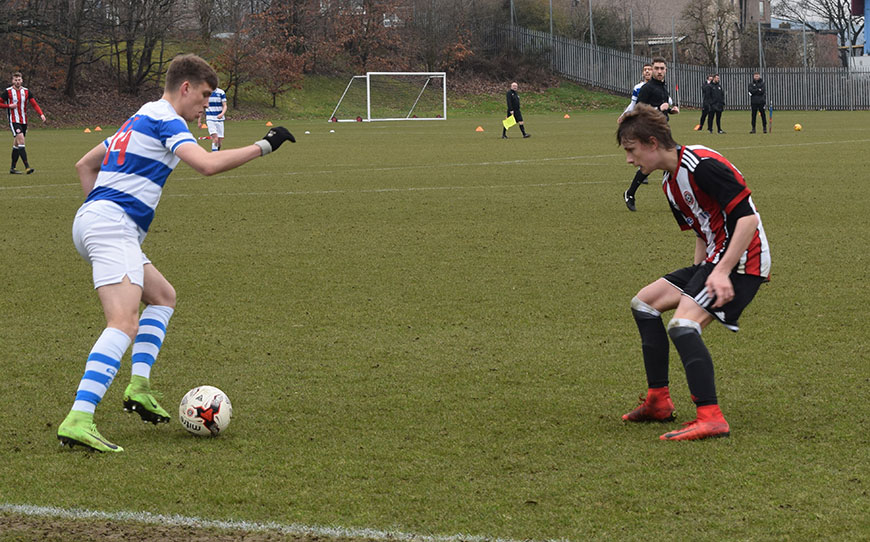 By Joe Harris: Aiden Mesias’ second-half equaliser ensured QPR Under-18s avoided a third straight defeat as they twice came from behind to draw 3-3 with Sheffield United Under-18s at the SteelPhalt Academy.

First-half strikes from David Parkhouse and George Cantrill gave the Blades the advantage, but Mesias and Leandro Ribeiro both netted to put Rangers back on terms. Tom Clare then regained United’s lead before Mesias completed the scoring with his second of the game.

Following consecutive victories against Burnley and Huddersfield Town, it came as no surprise that the hosts started the game in confident fashion, with George Broadbent’s early corner causing confusion and nearly finding its way into the back of the net.

However, they did break the deadlock just moments later when Parkhouse controlled a cross from the left-hand side and fired home his finish against the underside of the bar.

United soon doubled their lead as Broadbent sent in another corner that found Parkhouse at the back post, who directed the ball back across goal for Cantrill to head home from close range.

QPR struggled to a gain a foothold in the match for the majority of the first half but gave themselves a lifeline just before the break after Mesias finished off a mazy run into the area by squeezing an effort at goal past keeper Marcus Dewhurst into the bottom left corner.

And parity was restored immediately after the interval as Ribeiro was left unmarked and was allowed to slot a left-footed drive into the net.

However, the R’s were unable to maintain the momentum, with the game turning into a tightly-contested affair for the next 20 minutes before the Blades edged in front once again when Simeon Oure burst through down the right flank and squared the ball across to Clare to tap home.

The visitors refused to leave empty-handed and made it 3-3 shortly after the restart as they worked the ball forward toward captain Mesias, who claimed his brace by slotting the ball hard and low beyond the reach of Dewhurst.

And there was still time for one more twist to the tale as the referee brandished a red card to Cantrill for an alleged stamp on Rangers keeper Tyla Dickinson, although the ten-men held on for a point.

Blades Under-18s coach Derek Geary told LFE: “QPR played well and they deserve a lot of credit, but when you go 2-0 up and concede just before half-time it can be difficult to pick yourselves up for the second half.

“I cannot fault the lads though today, I thought they worked hard off the ball and they have given me everything. For large parts of the game they played some great stuff, but when you are two goals up obviously it is important to manage the game, which maybe we could have done better today.”