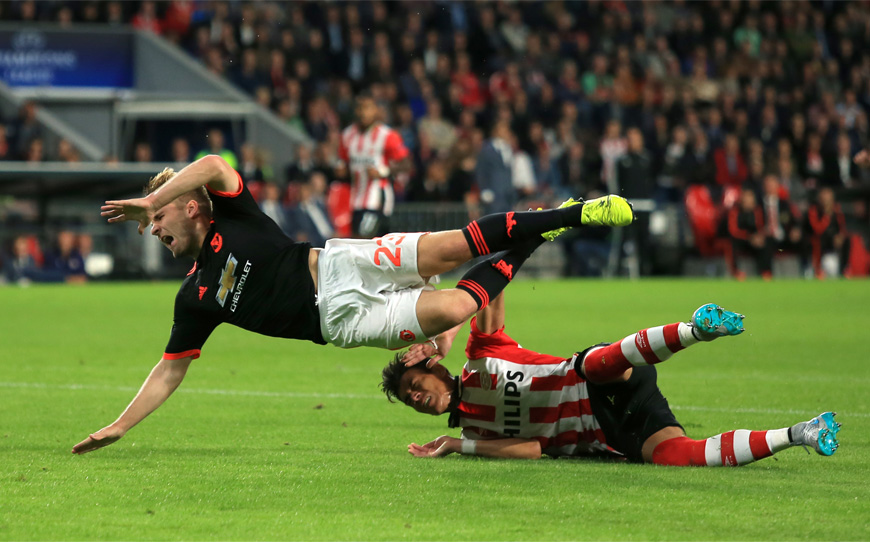 Luke Shaw will be out injured for around 6 months after suffering a double fracture of his right leg in Manchester United’s 2-1 Champions League loss at PSV Eindhoven.

Shaw, 20, will have an operation on his return to Manchester, which is expected to be tomorrow or Thursday. He received oxygen while being treated on the pitch for 10 minutes after Hector Moreno’s tackle.

“It is awful. It was a very bad tackle. He had the oxygen mask on and was crying in the dressing room,” said manager Louis van Gaal.

“A boy who came to Manchester United at 18 years old, it was very difficult, and the next season he plays fantastic and then that happens like this.”

“When I say it is a red card and penalty, you will say I am a bad loser. Every word I say is taken in the wrong way. It was in the 18-yard box and it was very bad tackle with two legs.”

“I’m not a doctor so I cannot say, but when you have a double fracture it is four to six months. But you can never say that in advance. He won’t play in the group stage, I don’t think. I hope he will play again this season,” van Gaal added.

The 27-year-old, who broke his leg during last year’s World Cup, added: “I’ve been through this before and I know how it feels.”

Shaw, a graduate of Southampton’s youth system, is a former LFE Apprentice of the Month winner and was also in The PFA team of the year prior to a £30million move to Old Trafford in June 2014.

He made 20 appearances for United in an injury-interrupted first season at the club, however, has been a shining light this term.

Shaw took a fitness coach away on holiday with him to prepare for 2015-16 and has been an ever present for van Gaal’s team. He also looked like the natural long-term successor to Ashley Cole as England left-back during recent European Championship qualifiers against San Marino and Switzerland.