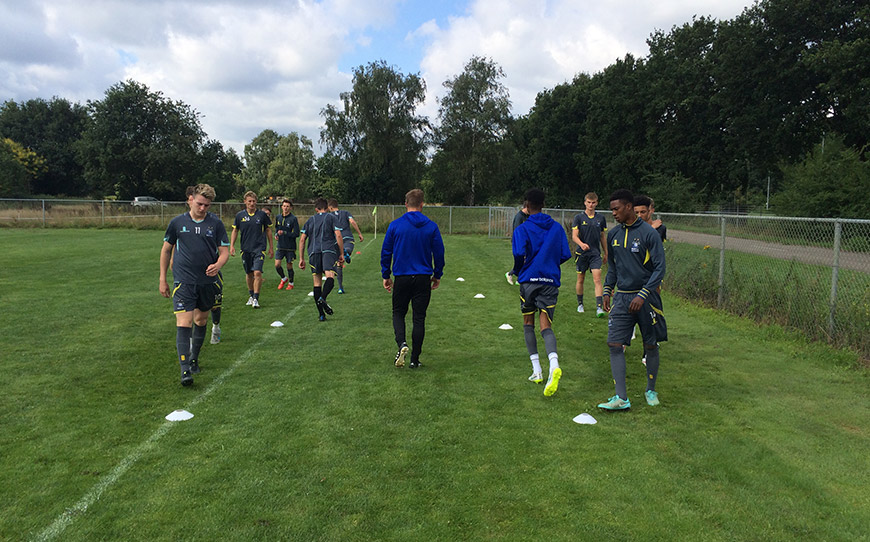 It’s been two days since we arrived in the Netherlands for our LFE preseason trip and it’s been very good up to this point.

The flight was fast – the pilot had only just turned the seatbelt signs off, then suddenly they were back on as we landed in Amsterdam!

The coach journey dragged, however. Not only due to the two-hour trek, but also the fact that I was in a confined space with Bourney (Robert Bourne) waffling on to himself and Rhys (Williams) breathing heavily down my ear every time I tried to sleep! Come on lads a bit more consideration please!

Once we reached the hotel, we dropped our stuff off in our rooms and went out to training.

After Lithers (Mark Litherland) and I had been electric during the session, we encountered the only fault of the hotel – there is no facility on site to cool off our boots!

Then, in the evening we went down for tea in the hotel, where we sat with the Middlesbrough team. The food was of a high standard with a healthy aspect resonating throughout and, to the shock of no-one, (Jamie) Hesketh was giving it the big one saying he’s eating clean.

Day two started with us all meeting in the food room for breakfast at 8:30am. There were quite a few options available ranging from fruit to the traditional Dutch breakfast of… coco pops!

We then headed out to training where we participated in a casual game of limbo on the way – under a fallen tree.

Then we played attack against defence with various stipulations put in place. Training was at an exceptional standard and was epitomised by my lob on Rhys (Williams) that happened to be caught on video – one to show the grand kids I think!

In the afternoon, we went back out for a little shooting session where LFE regional officer Craig Skinner joined in and, to be fair, he had a bit about him putting a few lads to shame!

The tea on the second night was either spaghetti bolognese or steak, which was cooked in a load of different ways. I drew the short straw and ended up with the most well-done steak – I now need to book a dentist appointment when I get back! But at least we’re getting some decent protein for recovery.

I’m looking forward to facing Vitesse Arnhem on Saturday and hopefully I can play well. There is also an unexpected game tomorrow against Middlesbrough, which will be for bragging rights in the hotel so a lot is at stake!

Overall, the trip so far has been a really beneficial and enjoyable experience and it can only get better.