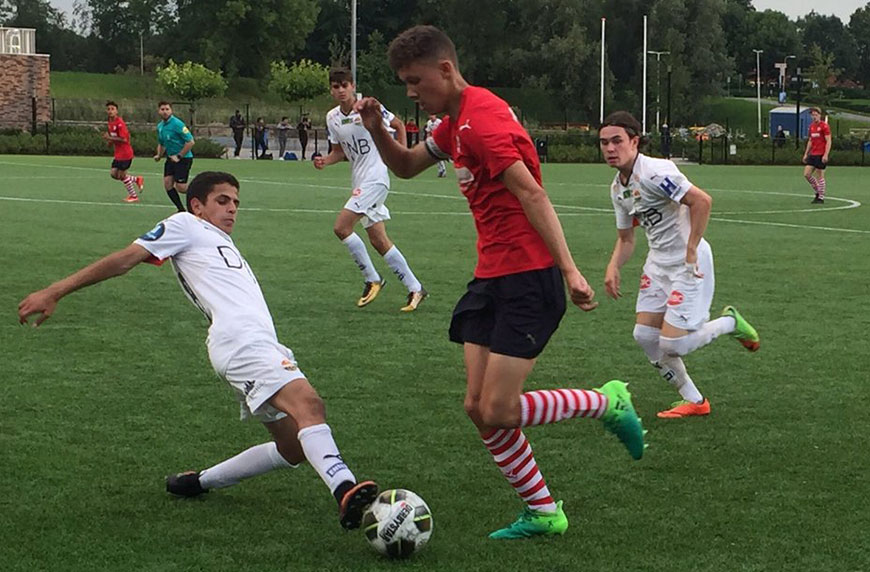 Six of the eight English clubs in the Netherlands were in action for the second round of fixtures, with four sides producing impressive victories.

Wigan Athletic and Fleetwood Town had already played two games on the LFE trip and organised a contest against each other, which the Latics won 3-1 thanks to goals from Divin Baningime, James Berry and Mitchell Culshaw.

Read on to find out how the rest of the teams got on against their European opponents:

Tom Clare scored a hat-trick as Barnsley Under-18s breezed past Norweigian side Stromsgodset to claim their first win in the Netherlands.

The young Tykes were on top form as they brushed aside their opponents with ease, raising their goal tally to eight in two games during their LFE trip.

Matty Wolfe netted three times in Barnsley’s 3-3 draw against Excelsior Rotterdam and it was Clare who repeated the feat by making the most of the numerous chances created by the visitors to claim the match ball.

Joao Rangel and Amir Berkovits were the other players to get on the scoresheet and contribute to an emphatic victory for the Tykes.

Burton bounced back from the heavy defeat they suffered in their opening game against ADO Den Haag with a much improved performance.

The Brewers youngsters were under the cosh early on and shipped a couple of goals against a strong NAC Breda Under-19 side, but the team showed great character to prevent much further damage.

The Dutch hosts took a three-goal lead into the second-half, but a solid display from the visitors meant they were unable to extend that advantage, meaning Burton can take some positivity into the Volendam tournament at the weekend.

Sion Green bagged a brace, while Costelus Lautaru also got on the scoresheet as Coventry produced an impressive 3-1 victory over Excelsior Rotterdam.

It took 20 minutes for the Sky Blues to get in front when Green received the ball in space as he entered the right side of the area and struck a powerful shot high to the far corner.

Coventry extended their lead almost immediately from the kick-off to start the second half as Lautaru ran onto a long ball and hit a perfectly weighted lob over the keeper.

However, the hosts halved the deficit a minute later through a terrific strike with the outside of the boot from the edge of the area that rifled into the top right corner.

Coventry had multiple opportunities to add to their tally, with Lautaru having an effort cleared off the line, while Green produced a great turn to evade his marker before shooting straight at the keeper from point-blank range.

And it was Green who sealed the win in stoppage time as he again found space on the right side of the area and on this occasion drilled the ball low past the keeper.

Brandon Parsons netted a hat-trick as Exeter recorded their second win in the Netherlands with a 7-2 rout against NAC Breda in front of former Holland striker Pierre van Hooijdonk, who was in attendance as a spectator.

The young Grecians quickly asserted their dominance from the off and opened up a commanding 4-0 lead before half-time, with Parsons scoring twice.

The Dutch opposition performed much better in the second half and were able to snatch a couple of goals of their own, but Exeter continued to threaten going forward and extended the distance between the teams by adding three more to the score.

Lucas White, James Dodd, Josh Key and Joe O’Loughlin all converted chances for the tourists, but it was Parsons who stole the show by completing his hat-trick in the second half to cap off a comprehensive victory in style.

Hartlepool overturned an early two-goal deficit to beat Excelsior Rotterdam 4-2 thanks to second-half strikes from Jon Weirs, Joe Jackson and a Connor Simpson double in an exciting encounter.

It was a disastrous start for Pools as they found themselves 2-0 down after just nine minutes following two defensive errors.

However, the visitors reacted well and grew in confidence as the half went on and a shuffle of the pack at the break paid dividends almost immediately.

Jackson began to cause problems with his direct running and physicality, but it was Weirs who was the source of Hartlepool’s opener as he drove through the defence and calmly slotted the ball into the net.

Hartlepool’s improved second-half display continued and they were soon back on level terms when Lewis Orrell’s free-kick was diverted in at the far post by Simpson.

With the momentum clearly shifted in the English team’s favour, Simpson notched his third goal in two games in the Netherlands with another header at the back post from a corner kick.

And they were able to add extra gloss to the scoreline in stoppage time when Jackson tapped in from another corner to wrap up a terrific turnaround.

Scunthorpe maintained their unbeaten record during the LFE trip with a 1-1 draw against German opponents Rot Weiss Essen.

Having made the trip across the border, the Iron were slow out of the blocks and conceded first for the second game in a row, having also handed Excelsior Rotterdam the lead in their tour opener.

The visitors remained a goal down at the break, but stepped their efforts up after the restart as they went in search of an equaliser.

And that leveller deservedly came following a slick team move that was finished off by first-year scholar James Kalu to restore parity.