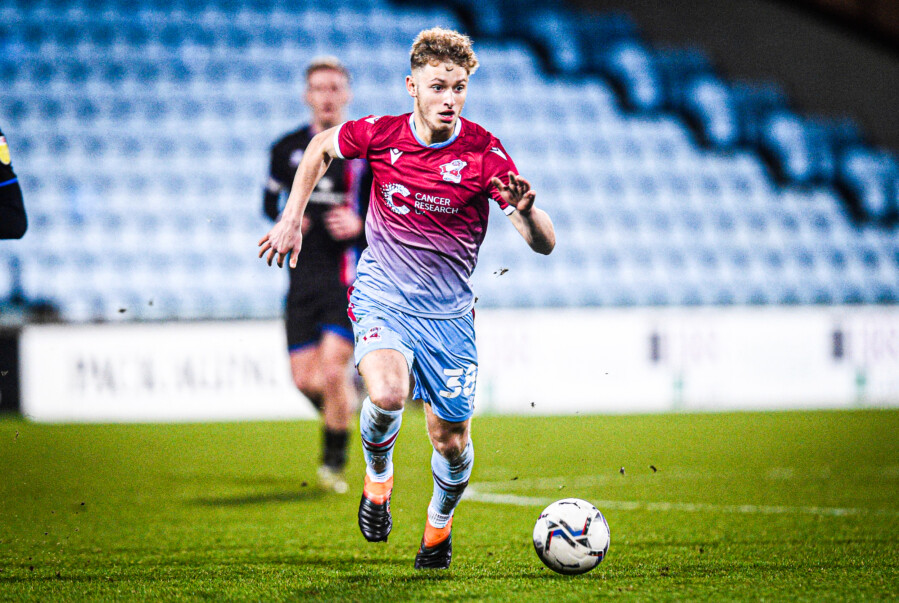 Just weeks after making his senior debut, Scunthorpe United apprentice Harry Lewis has put pen to paper on his first professional contract with the club.

The left-sided midfielder made his League Two debut against Carlisle United on New Year’s Day and has now committed his future to the Iron by signing a two-year deal, with an option for a further year in the club’s favour.

Over the course of the 2021/22 season, Lewis has featured at left-back and left wing-back for the Under-18s, making 14 appearances and scoring twice. One of those goals was against Manchester United in the club’s memorable FA Youth Cup Third Round tie at Old Trafford.

“I’ve supported the club since I was young so it’s been my aim to get a contract here since I signed for the academy aged 12,” he told the club website.

“I remember I came in and did alright on a trial day but I dropped off and didn’t come in as much because I wasn’t enjoying it. I spoke to my Dad and he told me to stick at it and see where I get.

“I got to Under-16s and then got offered my scholarship, a bit later than everyone else because I got an extended period where it was still being decided if they wanted to give me one or not and I got it, and then kicked on from there.

“I’ve been on the bench (at senior level), made my debut and signed my contract so it’s been a bit surreal the past few months.”

Since the arrival of first-team boss Keith Hill, the 18-year-old has trained regularly with the senior team, made his first-team debut and been involved in a number of matchday squads. Lewis is grateful for the opportunities he has been handed so far. Looking back at his debut against Carlisle, he said:

“When I was warming up I’d looked around and saw my Dad, and also a few of my mates from school. It’s a bit surreal.

“I used to be in the stands watching and now I’m warming up and playing. It was very nerve-wracking.

“I came on a little bit shaky getting used to it. I fell over a few times, gave the ball away, but I got into the game and thought I did alright by creating a few opportunities.”