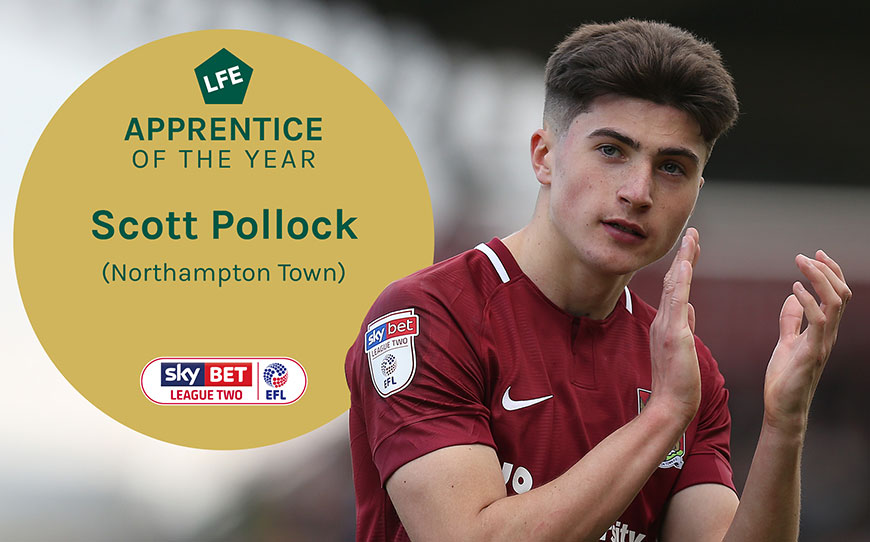 Having won a competition to play for popular YouTube team Hashtag United in 2017, Scott Pollock has gained celebrity status online, with over 180,000 followers across multiple social media channels.

However, he has not been distracted by the considerable attention, working his way into Northampton Town’s promotion-winning first team, as well as achieving exemplary grades academically.

The exciting midfielder, who was originally with the club’s Shadow Squad before earning a scholarship in September 2018, made his senior bow against Cambridge United halfway through his first year as an apprentice and has gone on to rack up 23 outings, as well as notching his only goal to date in a 2-0 victory over Carlisle United last October.

Pollock has also been an exceptional student in the classroom, earning a D*D*D* grade profile on the BTEC Extended Diploma. In addition, despite starting his apprenticeship two months late, the 19-year-old was the first in his cohort to complete the NVQ Diploma and chose to attend a six-week course at St George’s Park to complete his FA Level 2 Coaching certificate.

Pete Stephenson, Head of Education, said: “I have known Scott since he was a 14-year-old in the club’s Shadow Squad. He has always been a very quiet, understated lad that just gets on with his football and works incredibly hard to be the best he can be, both as a footballer and as a person.

“Despite his involvement with Hashtag United, which brought a worldwide following and made him more well-known than most of the current professionals at the club, he hasn’t changed as a person and if anything, he has worked even harder.

“He made many personal sacrifices to take opportunities to trial with the Youth Team and got himself incredibly fit, so that he was ready to show what he could do. His development has accelerated at an incredible pace.

“At the same time as all of this has been going on, he has remained extremely committed to getting the best possible grades he can in his education.

“He has pushed himself to go on and do a higher education course despite getting his professional deal, and he shows an exceptionally high academic level.”

Pollock’s online profile has inadvertently shared the club to a worldwide audience, which has seen him become the poster boy of the academy, something he has taken in his stride.

The talented teenager, who was named in LFE’s ‘The 11’ in June 2019, has remained professional and become a role model to his peers, while he even reignited his YouTube career during lockdown with a range of impressive football-based videos, using his ample contacts to explore creative interests away from the game.

Speaking to LFE in June, Lead PDP Coach Jon Brady said: “Scott was in our Football Education programme prior to becoming an apprentice. During that time, he played at Wembley against some Premier League All-Stars and was named man of the match. Since then, Scott’s risen to every challenge that he’s been given and has now played over 20 games for his boyhood club.

“He’s been creative with making videos, he’s had some brand deals and he gets the chance to go to different events, so he’s making the most of his spare time while also keeping the right amount of focus on his football.“

Academy Manager Ian Sampson added: “Scott has a tremendous attitude to learning and appears to listen to all the advice he is given and then adds it to his game.

“He has continued his education by studying a HND qualification alongside his continued involvement in the first team, which shows he is a very balanced young man. This was very much an optional qualification and he was the only one of the seven first-year pros that decided to take up the offer.

“He is a great role model for all young players and shows what can be achieved if you work really hard, listen and learn. I am sure he is destined to go on and have a fantastic career in the game!”