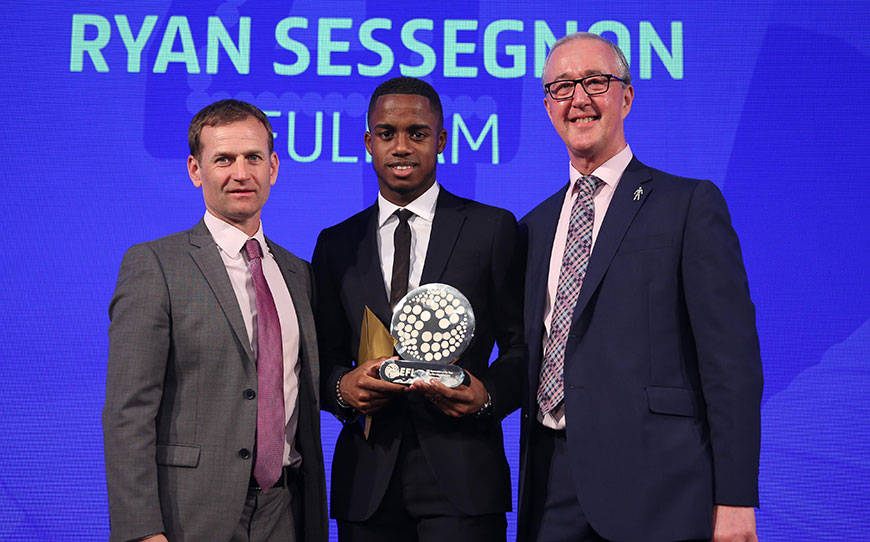 Even for the standards Ryan Sessegnon has set over the past two seasons, scooping five prizes at the EFL Awards was an astonishing and historic achievement.

And yet, the Fulham starlet remained incredibly humble despite his unprecedented success.

“It’s an honour to win all the awards I have done,” Sessegnon said. “It’s a great achievement, it’s a credit to the team and the way we’ve played this season. We’ve played an attractive brand of football which has helped me in the way I like to play.

“I think I have to credit the manager and my fellow players, because the style of football we try to play helps us all express ourselves and that’s been a big factor in what we’ve achieved so far this season.

“It’s nice to win both the Apprentice of the Year and Player of the Year in the same season. I never expected to win Young Player or Player of the Season because there is some fantastic competition – Ruben Neves at Wolves, James Maddison at Norwich and Tom Cairney here at Fulham. To win those two awards is a special feeling.

“Ever since I came in on my debut I’ve just wanted to learn and keep improving. I just try to get better day by day.”

The left-back turned left-winger burst onto the scene at the start of his first year as an apprentice, becoming the first player born in the year 2000 to score in the Championship in August 2016, a week before collecting his GCSE results.

He registered 30 first-team appearances in his debut season, leading to a place in the PFA Championship Team of the Year before taking his exploits onto the international stage, winning the UEFA European Under-19 Championships with England and ending the competition as joint-top scorer.

Sessegnon reportedly attracted the attention of the top teams in the Premier League and was the subject of a £25million bid from Tottenham Hotspur, but he elected to stay at Craven Cottage, penning his first professional contract in June before starring in their bid to reach the top flight.

He said: “I have been at the club since the age of eight. It has been a dream of mine to play in the Premier League with Fulham. We are so very close I just want to get over the line now.

“We are on an incredible run this season and I want to continue that and hopefully we can push into the Premier League. Hopefully we can do it automatic, but if not then we will do our best in the play-offs.”

The England Under-21 international, who only turns 18 in May, is into double figures in front of goal this season and scored a hat-trick on his 50th senior appearance against Sheffield United in November.

Yet more individual recognition could still be coming his way after becoming the first ever player outside the Premier League to be shortlisted for the PFA Young Player of the Year award, where he lines up against Harry Kane (Tottenham Hotspur), Ederson (Manchester City), Marcus Rashford (Manchester United), Leroy Sane (Manchester City) and Raheem Sterling (Manchester City).

And despite being one of the most in-demand footballers on the planet, Sessegnon has continued to put in extra hours to complete his BTEC qualification.

He said: “One memory that sticks in the mind with Ryan is when he made his League debut on a Tuesday night away at Leeds United. He played 90 minutes and then didn’t get back until gone 2:30am.

“We weren’t expecting him in the next day but it was one of his first games with the first-team and he didn’t know any different. He ended up being the first one in class that morning. That pretty much sums up Ryan.

“It’s always difficult for a player involved in the first-team but whether he’s been with them or away with England he’s always kept up with his work and now he’s close to completing his BTEC and has stayed on top of his functional skills.”

Sheffield Wednesday’s Alex Hunt and Reading’s Danny Loader were also on the shortlist for the Apprentice of the Year prize.