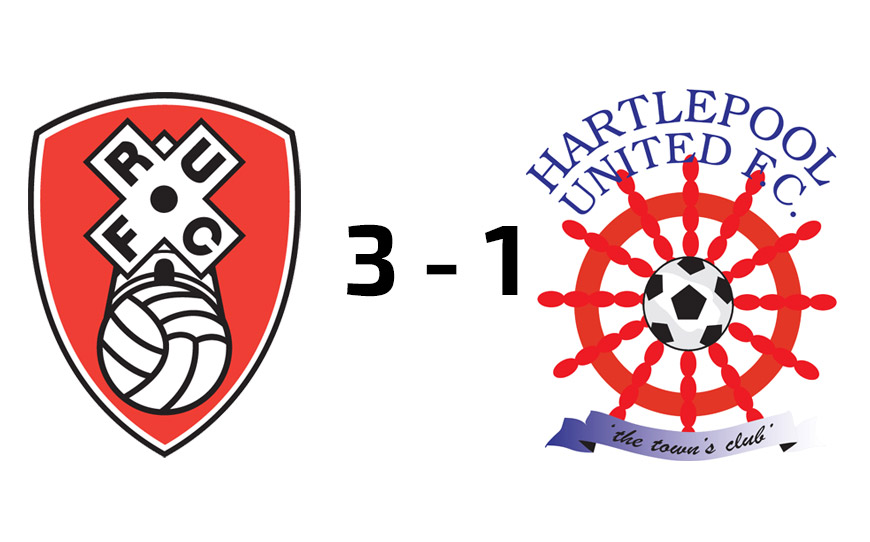 By Billy Lumsden: Akeel Francis grabbed his fifth goal in as many games as Rotherham extended their unbeaten run to six games with a victory over Hartlepool.

Rotherham flew out of the traps and were two goals up by half-time courtesy of Francis and a deflected effort from Reece McGinley. When Lewis Murrt added a second-half penalty there was no way back for the visitors who registered a consolation goal from Joe Jackson.

The Millers had started brightly and were rewarded for their neat play inside twenty minutes when Murr swept a beautifully weighted pass out to McGinley on the left. The winger beat his marker and Francis was able to head his centre home.

Murr and McGinley then combined for the second goal. This time though the winger, was aided by a wicked deflection off Pools centre-back Jacob Owen which took the ball beyond goalkeeper Ryan Catterick.

Hartlepool started the second period with more intensity and could have reduced the arrears. Lewis Orrell released righty-back, Cameron Holliday but his drilled shot rebounded off the post.

Despite enjoying their best spell of the game, the visitors fell further behind when a long ball forward caught out the defence and led to Catterick colliding with Francis. With the keeper unable to continue, Scott Moloney’s first action was to pick the ball out of the net from Murr’s spot-kick.

Hartlepool pulled a goal back late on when Jackson nipped past Akeem Hinds and J’cee Abraham to finish tidily past George McMahon.

With a game in hand on York and Burton, Rotherham coach Daral Pugh stressed that he has challenged his players to finish the season as high as possible without losing another fixture.

“We’ve set ourselves a target, we’ve got eight games left in the league now and if we can go those eight games without losing, we will be there or thereabouts at the top” he said.

“That is the target these guys have got and that’s what they are aiming for.”