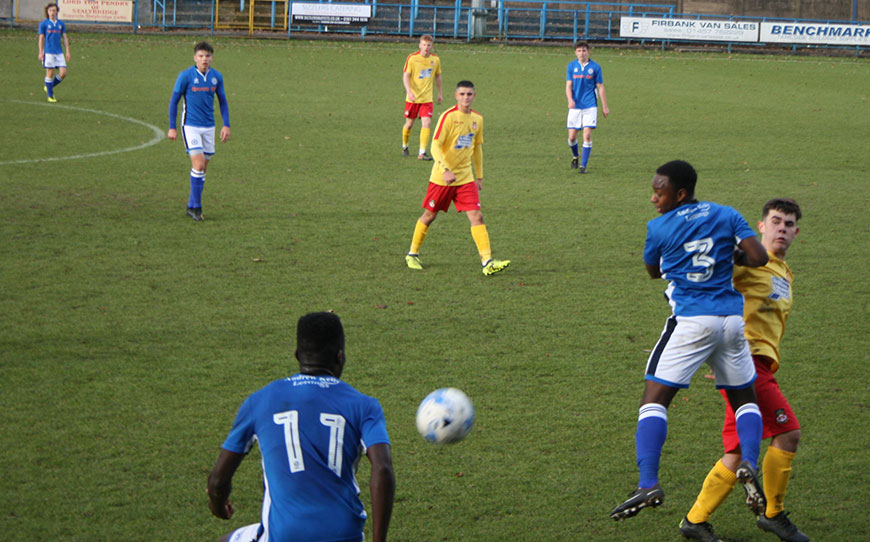 By Matt Clayton: Rochdale Under-18s eased their way to all three points against Wrexham Under-18s with a 3-1 victory to lift them to the top of the EFL Youth Alliance North West division.

James Neild, Fabio Tavares and Neil Kuemo were the goalscorers as Dale claimed their fourth league win in succession, while Niall Freeman provided late consolation for the visitors, who in complete contrast have now lost their last four league matches.

The deadlock was broken after 16 minutes when Louis White’s free-kick was flicked on at the near post towards Neild, who produced a spectacular overhead kick to give the hosts the advantage.

The young Dragons had started the game positively, but were unable to recover from that setback as they allowed Dale the majority of the possession to control the tempo of the game.

And it came as no surprise when the margin was doubled after Florent Hoti sliced a cross into the path of Kuemo on the edge of the area, with the striker taking a touch before emphatically firing into the bottom corner.

The chances kept on coming for Chris Brown’s side, with Kuemo, who was heavily involved in most attacks throughout the game, testing Wrexham keeper Dane Rigby from distance having cut inside from the left wing before Hoti struck the rebound fractionally over the bar.

Rochdale did extend their lead six minutes before the break when White won possession in midfield and picked out Kuemo, who played a perfectly weighted pass through to Tavares, with the first-year apprentice showing great composure to round the keeper and slide the ball into the empty net.

There were no signs of a change in momentum after the restart as the home team continued to pile on the pressure, with Aaron Morley, Dan Adshead, Kuemo and Tavares all having efforts at goal.

Dale keeper Brad Wade had been a spectator for most of the game but was finally forced into action on 55 minutes when Sam Dickinson caught the defence napping with a quickly taken free-kick and played in Steffan Buckley, but Wade remained alert to save with his legs.

However, the Dragons did give themselves a lifeline with 15 minutes remaining when Wade sliced a clearance after the ball took a bobble on the Bower Fold pitch, allowing Freeman to slot the ball home.

The Welsh side failed to build on that and it was the hosts who finished the game strongest as substitutes Lewis Bradley and Musambya Kisimba both had chances to restore the three-goal margin, although neither troubled Rigby.

Rochdale’s Lead PDP coach Brown told LFE: “Seeing the goals go in shows they’re putting into practice what we are doing on the training pitch, which is always pleasing to see.

“The first goal was a real surprise. I didn’t know that James (Neild) had that in his locker with an overhead kick, so that was really nice to see.”