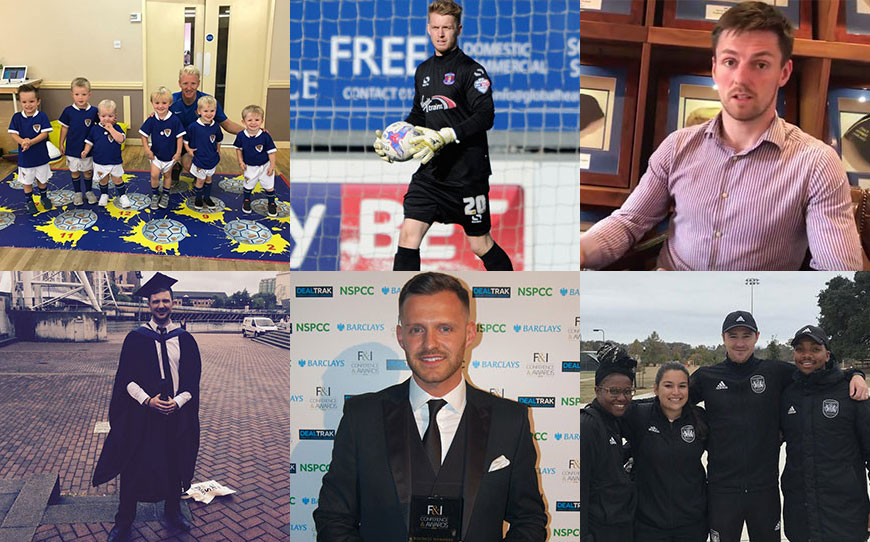 LFE’s Life Skills Manager Simon Williams completed his apprenticeship at Rochdale 10 years ago. He caught up with some former team-mates to find out where they are now.

Footytotz teaches football skills to children aged 18 months upwards. I work in nurseries, schools and run public sessions. We provide a basic introduction to football through fun games and themes based on children’s stories. While at Rochdale, I developed basic transferable skills which I knew would help me to work with young children. Social skills have allowed me to grow the business through making contacts and having a friendly personality towards parents and children. When full-time football ends, something better may open up. I have built a successful business alongside 10 years of playing and earning at a semi-professional level and I have enjoyed every minute of it.

After being released by Rochdale, I had an open-mind and took the chance to play in Spain and then Malta. When you are trying to find a new club you realise how hard it is, but I did climb back into the EFL and signed professional terms with Carlisle United. I’ve since played for Gateshead and Southport. It is important to get your head into what is asked of you at college and then to go on and do further education, whether you are a professional or not. Football isn’t forever and you can do both.

In my role at The PFA, I provide independent advice and guidance to academy players, trialists and parents/guardians of those who are at professional clubs. Football gave me a grounding – I know what is expected of me and I have high standards. It creates the ability to succeed outside of football when entering a new career.

I manage a team of Sales Executives, who I support and coach how to sell cars, insurance and finance. At Rochdale, I learned how to be a team player, lead by example and earn respect through punctuality, enthusiasm and work ethic. I try to promote these as much as possible to my team at Toyota. My time as an apprentice was the best two years of my life, I made friends for life and have actually employed ex-teammates Joe Reidy and Rob Crank to work alongside me.

After Rochdale, I continued to play semi-professionally for Woodley Sports, Rossendale United and Trafford. I then focused on studying for a BSc in Physiotherapy at Salford University, with help from The PFA. After graduating I started working for Spire Hospitals based in Macclesfield as a full-time MSK Physiotherapist. Alongside this, I’m an amateur boxer and also coach a local youth team. The greatest football lesson is coping with setbacks – I learned the art of perseverance following my release. Despite not fulfilling my dream, I still look back fondly and am grateful for the experience.

Now: Director at Manchester School of Soccer and Coach Right UK (Based In Houston, USA)
Football: Retired through injury

I own two football coaching companies, one in the UK and one in the USA. Mental strength is the most valuable thing I take away from football. Looking back, most players are technical but what can set you apart is mentality. Being successful can be a question of mental strength during adversity. My advice for academy players is to set your standards high and always reach for the stars.

Others Still at the Club

‘Rochdale A Decade On’ features in Issue 37 of LFE’s Touchline magazine.