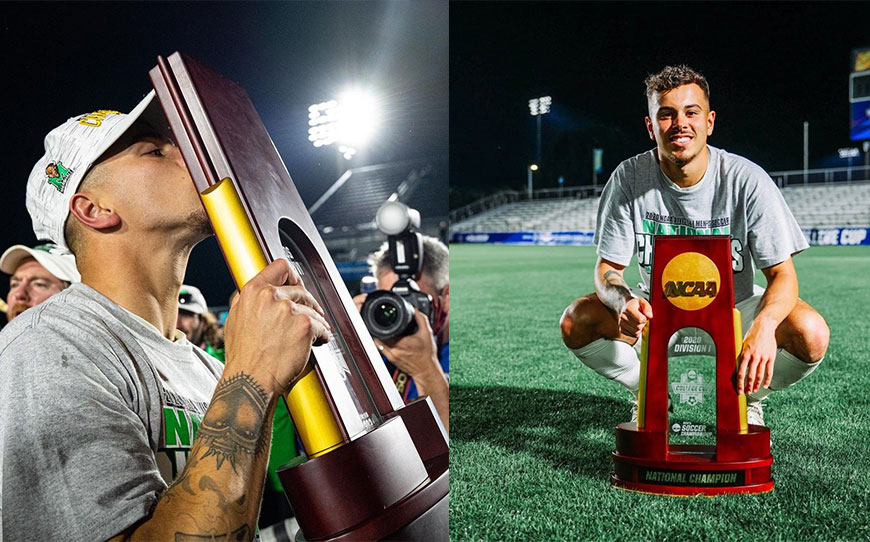 In the summer of 2016, Jamil Roberts’ career in football was hanging by a thread after being released by Plymouth Argyle at the conclusion of his apprenticeship.

Almost five years later, the 23-year-old was accepting the NCAA Division 1 Offensive Most Outstanding Player award, having scored the winning goal to help Marshall University become NCAA National Champions for the first time in school history, since being established in 1895.

The versatile forward struck three straight match-winners in the quarter-final, semi-final and final, netting an extra time golden goal with the last kick of his college career before turning professional with Sporting Kansas City, who selected him with the 77th pick of the 2021 MLS SuperDraft.

“I’ve watched the game back many times and I still pinch myself,” he told LFE. “To be the one who scored the historic goal and complete my four years at Marshall in that way, I couldn’t have scripted it any better.

“Without blowing my trumpet too much, it did get to the point where I felt like a small town celebrity, which was very surreal. I don’t think I paid for a drink in the month following the tournament. Everywhere I went, it was either on the house or someone was buying it for me.

“Some of the great Marshall athletes have had streets named after them around the city and there’s a rumour that I’ll have one of my own. There has also been talk that I could be an early inductee into the Hall of Fame. To even be mentioned in the same category as people like Randy Moss and Chad Pennington, who are NFL legends, that to me is just incredible.”

Unseeded Marshall enjoyed a fairytale run to the National crown, seeing off number one ranked Clemson, reigning champions Georgetown, hosts North Carolina and then Indiana, who boast one of the most successful soccer programmes in the nation.

“The NCAA Division 1 Tournament is the best against the best from across the whole country,” said Roberts, who was named as one of four finalists for Best Play at the 2021 ESPY Awards. “There are over 200 D1 teams and then 32 make it to the post-season competition.

“We had to beat some powerhouses of college soccer and we were dubbed as an underdog story by the media, but we never saw it that way. We were prepared to the finest detail for every opponent, which gave us so much belief in each round.

“Every single player played their part in helping us win the title, but inevitably my goal gets highlighted the most. I was a left-back in the Under-18s at Plymouth, but after one training session here, I was moved forward. That’s completely changed the trajectory of my career and to finish my time at Marshall with a tap-in, a proper striker’s goal, was very fitting.”

The American journey all started for Roberts in 2017, having spent a season struggling to make an impact at Dorchester Town in non-league, although a potential contract offer from Grimsby Town almost prevented him from making the switch across the pond.

“There’s a period of self-pity that comes after being released,” he added. “Some lads are ready to go straight into a new challenge after the apprenticeship, but I wasn’t. I needed some time to reflect and refocus.

“A year on from leaving Plymouth, I was refreshed and incredibly motivated to take on the challenge of America. Instead of holding onto a lot of bitterness, I was able to disconnect from that negativity and just focus on myself and my objectives.

“I was in pre-season training with Grimsby Town in League Two at the time and they’d made it clear that they intended to sign me. But the U.S. route offered a long-term guarantee of full-time football alongside getting a degree.

“At this point now, I’ve had four years of development, where I’ve matured physically as an athlete and mentally as a person, so now I feel a lot better prepared to start my professional career.”

Following a steady first two seasons with the Thundering Herd, Roberts had a breakout year in 2019, registering eight goals and 10 assists in 18 games, which put him on the radar of several MLS clubs.

He said: “I believe my goal contributions tally was top three in the country and my assist numbers were top five, so I was suddenly being touted as one of the most promising forwards in the country and talks between myself and other clubs intensified.

“My final season was delayed due to Covid, but I was still eligible to enter the 2021 draft and I was invited to the Combine, held in Kansas City.

“We played three games with every MLS and USL scout or sporting director in attendance, and then there were six or seven weeks of non-stop conversations with clubs and agents up until the event in late January.”

Despite being predicted by many as a first-round prospect, MLS restrictions on the number of international players allowed on each roster meant that the talented left-footer slipped down the pecking order, eventually being taken off the board in the third round.

“I had a really good Combine and great conversations with quite a few clubs in the lead up to the draft, but I had the international tag hanging over me,” Roberts continued. “When I finally saw my name come up next to Sporting KC, the feeling was indescribable.

“It was the culmination of a long journey, with many ups and downs. There was a realisation that I was right to believe in myself and I wasn’t deluded to have these ambitions.

“It couldn’t have worked out better for me. The training ground is the U.S. National Team’s HQ and it’s an environment where there is no excuse not to succeed. I’m so grateful to have been given this opportunity.”

Roberts, who will spend the remainder of the season at affiliate club Sporting KC II in the second division, has not progressed solely as a footballer, with the U.S. scholarship route allowing him to further his studies, attaining a Bachelor’s degree in Health Sciences.

“My coach took a big interest in making sure everyone was focusing on their education and the university provided a lot of support staff for the student-athletes,” he said. “I also had an academic advisor who would organise additional tutoring for certain classes whenever I needed it.

“I’ve always been interested in the psychology of sport, but I wanted to broaden my knowledge of the whole subject, so I chose to study Health Sciences and then I plan on eventually getting my Master’s, specialising in psychology.

“The education I’ve received has been first class and it has helped with my own mental state. Obviously, I’ve matured with age and my headspace is a lot clearer anyway, but I do feel like the education has been a contributing factor and some of the things that I’ve learned and applied to my own game have been invaluable.”

The experience in the States is not just limited to on the pitch and in the classroom, providing opportunities to travel and learn about different cultures.

“It’s massively broadened my horizons,” Roberts said. “Our team was made up of lads from America, England, Germany, Argentina, Yemen, New Zealand, and that’s just what I remember off the top of my head.

“I made a commitment to immerse myself in the community and make an effort to understand the local culture, and I feel like I’ve done that.

I’ve become a much more rounded person with a better perspective on the world.

“Overall, it’s been a learning curve on and off the pitch. It’s allowed me to pursue education at a level I never thought I’d reach and it’s enabled me to achieve my dream of becoming a professional footballer, which I didn’t think would be possible after being released at 17.

“In all aspects, it’s been the best experience of my life and I hope that it continues now that I’m away from the college environment.”