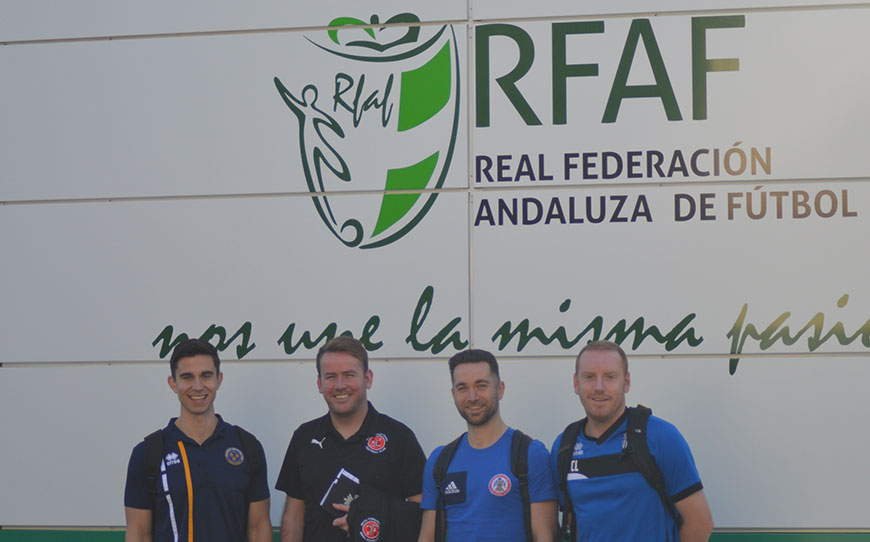 Four academy coaches from English Football League clubs have jetted off to Spain as part of a trip organised by League Football Education, designed to help shape the next generation of young English talent.

Our first stop of the trip was at the famous academy of Sevilla, which has produced players such as Sergio Ramos, Jesus Navas and Jose Antonio Reyes, to name a few.

We were greeted by the staff of Sevilla C and sat in on their daily meeting before talking to their staff, from psychologists to tactical analysts to the coaches themselves, one of which was 2010 World Cup winner Carlos Marchena. We talked in depth about their philosophy, training model, day to day running, as well as them answering all our questions. I was stunned by the togetherness of the staff and their trust in each other.

After viewing a sample of the first-team and Under-19s training sessions, we were able to chat with some of the youth coaches, who detailed how they prepare for their opposition and the methods they use to develop players to highest level.

We then moved onto the academy age groups Under-8s to Under-17s and met with more departments, as well as receiving a tour of the remainder of the facilities, including the analyst suite, the gymnasium and medical facilities.

Visiting the Andalusian FA was next on the agenda, which is the equivalent of a County FA in England. This gave us an insight into their regional centre and how it fed to the national team, which was a completely different structure to England and where they believe they have had major success from.

In the afternoon, we were fortunate enough to be VIPs to watch Sevilla Under-19s against Liverpool Under-19s in the UEFA Champions League Youth game. Liverpool won the game 4-0 and it was interesting to examine the contrast in styles between the English side that were very quick and powerful on the break, while the Spaniards were highly technical and determined to dominate possession.

A meeting with Sevilla’s head of coach methodology followed, where we were able to discuss our views on the game and gain a further understanding of the intentions of his strategy during the match.

In the evening, we attended the senior Champions League match at the Estadio Ramon Sanchez-Pizjuan, which was amazing to experience an incredible atmosphere. And it turned out the game itself wasn’t bad either as it ended 3-3 despite Liverpool being 3-0 up at half-time!

On Day Three, we made the short trip over the bridge to Real Betis, where Real Madrid’s Dani Ceballos and West Ham United keeper Adrian came through the ranks. The club had more of a family feel to it – smaller in size, training pitches closer together, but top-notch facilities. We had the opportunity to watch the Under-19s, B team and first-team train, who were all working at the same time and on adjacent fields and shared the same focus on tactical play.

After the sessions, we met with the academy manager and head of methodology, who opened up about their process for developing players and how they have formulated that plan – a great experience.

It has been a very rewarding first few days and it has been interesting to hear a variety of opinions on the best methods to develop young players. Next on the schedule is a trip to Granada.