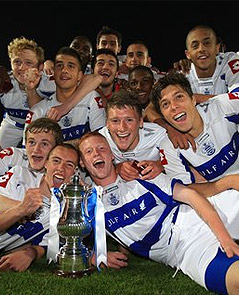 At the same stage of the Cup twelve months ago, QPR let victory slip through their fingertips by slumping to a 2-1 defeat to Grimsby Town and, for an hour last night, they were 3-1 behind and staring down the barrel of a repeat result.

But, the second-half sending off of County’s Cameron Darkwah threw Rangers the lifeline they needed as the striker’s two yellow cards in the space of 30 seconds shifted the momentum back to Rangers who capitalised ruthlessly to clinch their first ever victory in the competition.

“It feels brilliant, especially with the comeback because after half-time it looked like we might have blown it but I believed that we would get back into it,” said QPR Youth Development Manager, Steve Gallen.

“The sending off gave us the extra boost that we needed but I thought that we would still have won the game if it had been 11 against 11.”

“The win is great for the Club. I feel like we are one of the biggest Clubs out of all the Centres of Excellence and I feel that we should be challenging whether it is in the League or in this Cup.”

“We wanted to come away with something this season and we are very proud to have won the Cup and proved we are the team within it.”

Having missed chances to push for the title in their respective regional leagues – Rangers currently sit third in the South East, County fourth in the North West – the gleaming League Cup was the only shot at silverware for both Clubs this term.

The competition’s climax thrusts the northern and southern champions together with the choice of venue left to the discretion of the finalists and for the second year running, Loftus Road was nominated.

Wasting no time in seizing the home advantage, QPR grabbed the lead as Max Ehmer flicked Michael Doughty’s touchline free kick across the face of stopper Ian Ormson and inside his far post.

But the house party was quickly crashed as two County goals in two minutes provide the first twist – Danny Fitzsimons blasted into his own net and Darkwah tapped in from Sam Hare to take the lead followed by Steve Murty hitting the third straight after the break.

Then the tide shifted again as Bruno Andrade – after having cracked Ormson’s upright in the first half – snatched a goal back for the southern side, kick-starting a Rangers recovery boosted by Darkwah’s dismissal.

Referee Robinson had barely stuffed his yellow card back into his top pocket after Darkwah’s initial heavy challenge when again it was back in the air to send the striker storming towards an early bath for attempting to block a quick free kick.

The comeback was complete courtesy of a double from Danny Fernandez, the first via the penalty spot after Louis Barnes had chopped down Sam Bewick, and the second a cool finish to nudge Rangers back into the lead.

“I thought their good quality caused us problems but then we are three nil up and you are thinking we’re in a commanding position and then there was a sending off,” admitted Youth Development Manager, Craig Madden.

“In the end, we didn’t have enough quality, we ran out of legs and they ended up being the worthy winners.”

“But it has been a great season for us, we finished fourth in the league and got to a cup final. We deserved to get this far but we just didn’t have enough. We had two 15-year-olds starting and some of them – like Sam Barnes – have first team experience.”

“It is a case now of hoping that the Club can come out of administration and we get some sort of guidance of what direction we are going to head.”

Watching from the stands was Rangers’ First Team Manager, Neil Warnock who, whilst celebrating the first silverware of his tenure at Loftus Road, congratulated County for their efforts.

“I thought that Stockport County were superb,” he added. “It was a great game to watch with some great goals and excitement to the end. It was an excellent advert for the competition.”