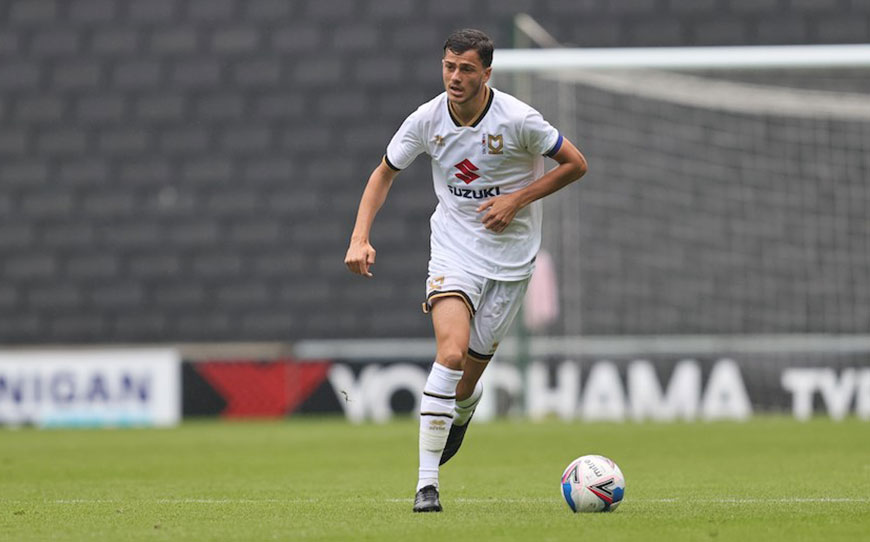 Seventeen-year-old Jack Davies has penned his first professional contract at Milton Keynes Dons, having displayed great determination to recover from a lengthy spell on the sidelines.

The highly-rated midfielder has been on the radar for a while after taking part in an England Under-15s camp in 2016 and progressing to training with MK Dons’ first-team three years later, although a serious injury ruled him out of action for the majority of the 2019-20 season.

Davies, who returned to action in February and is now in the first-team fold, told the club website: “I’m buzzing. It’s what I’ve been striving for, practically all of my life.

“It’s been a tough year and a roller-coaster year. I’d never had any type of injury before – not even a muscle injury – so to get such a serious one was a real shock. From then, I’ve got my head down and worked hard to get back stronger than ever.

“The hard work doesn’t stop and I’ve got to keep going and showing what I can do. As a young player, I don’t want to set my goals too high or too low.

“I’ve got a contract, yes, but it’s just the start for me – the start of what I hope will be a long and successful career.”

“When I first came into training last season, and Russ was still playing, he was always one to put his arms and around me and be there for me,” said Davies. “He’s a great role model and he’s been the same as the manager.

“All through my rehab he was checking up on me. Showing that faith and support, is massive for me.

“For any young lad going into the first-team environment, you need those players who will guide you. To have the support of a club captain and a legend in Dean Lewington is huge.

“Baily (Cargill) as well, from the moment I’ve started training with the first team, we’ve got on and he’s looked after me. I’m really grateful for that support.”