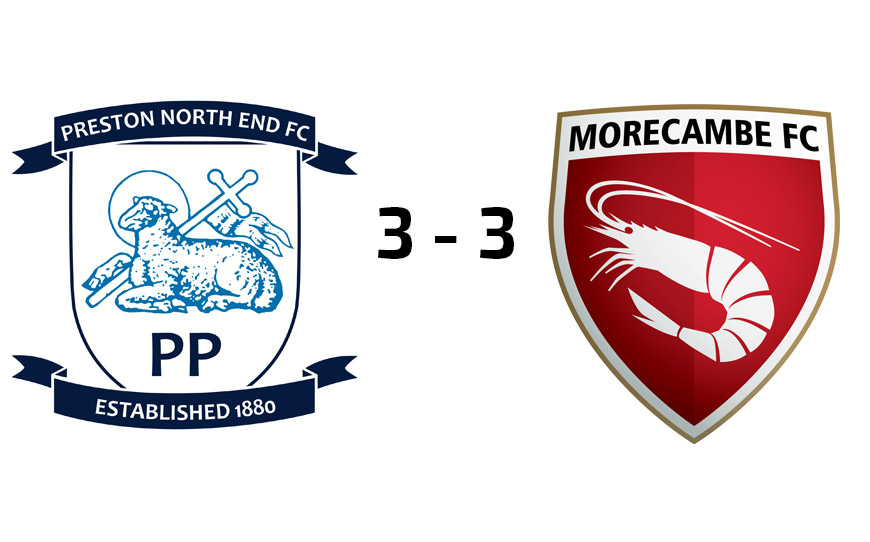 By Matthew Brown: Preston and Morecambe shared the spoils and six goals in an entertaining 3-3 draw in the North West Youth Alliance.

The two sides were still searching for their first league win of the season but both showed a willingness to attack and entertain in this fixture. The visitors led on three occasions but were finally pegged back by Alex Wood’s 85th-minute equaliser.

Morecambe opened the scoring with the first real chance of the game in the 14th minute. Steve Yawson got forward on the right wing and teed up Ben Hedley, who placed the ball into the bottom corner from just inside the penalty area.

Hedley nearly doubled his side’s lead in the 25th minute and North End immediately took advantage of that miss by levelling the scores. Tom Barry smashed a spot-kick, straight down the middle after Wood had been brought down in the area.

Morecambe regrouped and hit back though. Good link-up play involving Joe Nelligan on the left-wing, gave the visitors’ left-back the space to score via a deflection from a tight angle.

Oscar O’Neil went close for PNE and Hedley tested the goalkeeper with a long-range effort before the interval as the hosts threatened to equalise again. That pattern continued in the first 15 minutes of the second period with Melle Meulensteen going close for North End. The pressure finally told when Josh Earl crossed from the left and Myles Mason headed beyond Niall Maher.

Just like in the first half, though, The Shrimps regained their lead. Steve Yawson raced into the area and shot low into the bottom corner to score his side’s third. Both sides had chances to score in an end-to-end finish to the game, but it was North End who had the final word through Wood.

Things could’ve been even better for the home team but Maher made a tremendous save to deny Earl.
Morecambe academy boss Stewart Drummond said: “It’s always an entertaining game when Morecambe are involved and there are always plenty of goals. Preston dominated in the second half, certainly possession-wise, but we had a lot of chances.

“We’re a little bit disappointed that we’ve let the lead slip towards the end, but it’s also always nice to get a point on the board and not to lose. I think we probably just shaded the game in terms of chances created, but overall it was an entertaining game.”

“On another day we might have taken more of our chances and won the game. It’s all about learning at this age group, and hopefully the players can learn by getting into these positions and making the runs to get into those positions. Now it’s about learning to take the chances.”

“We were a bit off the boil in the first half, we didn’t win enough second balls or hurt them enough in behind the defence, and that was the difference between the first and second half. We were more on the front foot in the second half.

“I’d still like us to be a bit more positive going forward especially from midfield, in terms of getting more players into the box and breaking the lines. First half we were a bit lacklustre, but it was much better in the second half.”