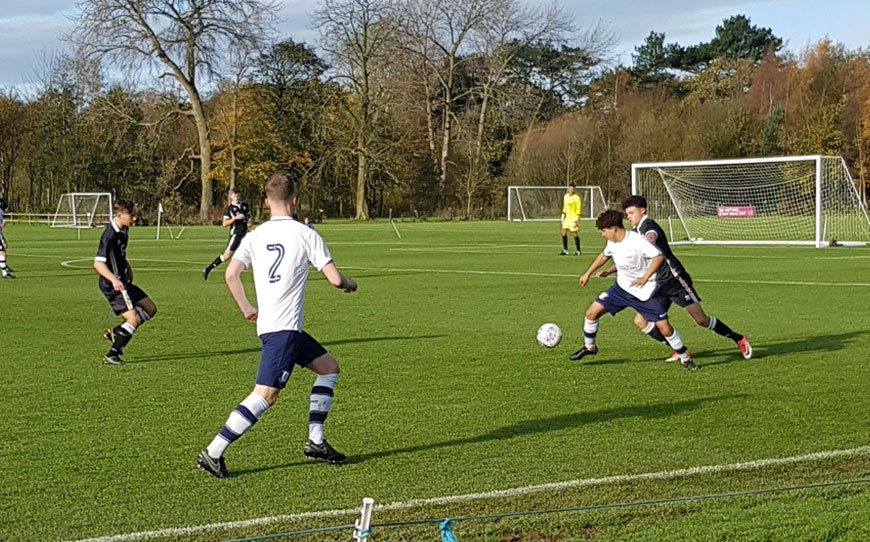 By Andrew Jones: Preston North End Under-18s came from behind to secure their fifth league win of the season with a 3-2 victory over Port Vale U18s in the Youth Alliance North West division.

North End Under-16 attacker Tyrhys Dolan netted a header to cancel out Lucas Green-Birch’s early strike before Mike Howard and Oscar O’Neil scored either side of a Matthew Ward stunner as the home side claimed all three points to remain fifth in the table.

Vale went into the game unbeaten in their last five outings in all competitions and were well on their way to extending that run when they opened the scoring after just four minutes as keeper James Cottam failed to keep out Green-Birch’s low driven strike.

The hosts were back on levels terms almost immediately when Kamol Campbell’s cross was misjudged by Vale stopper Dequan Crockwell, leaving Dolan unmarked at the far post to nod home.

And North End completed the reversal on 13 minutes when the increasingly influential O’Neil slid an inch-perfect ball through to Howard, who coolly placed the ball beyond the onrushing Crockwell.

Preston pressed for a third and almost doubled their advantage through Howard’s acrobatic effort that was brilliantly denied by Crockwell, O’Neil sent a shot wide of the target.

However, the visitors restored parity against the run of play with 25 minutes on the clock as Ward curled a stunning 25-yard free-kick into the top right corner, giving Cottam no chance.

Vale suddenly grabbed the initiative and were unfortunate not to take the lead for the second time in the match when Kyle Johnson’s effort was prevented by a combination of Cottam and Campbell, before a header flashed past the post from the resulting corner.

Preston responded with a chance of their own, which they converted to go back in front. Captain O’Neil was quickest to react to a Howard set-piece which had cannoned off the crossbar and calmly controlled and slotted the ball into the bottom left corner on the half hour mark.

Jack Baxter then forced Crockwell into another save before Harry Garstang fired wide as the home team went in search of some breathing space before the break.

Vale could have levelled the scores early in the second-half when Johnson blazed a shot wide, while Lilywhites defender Tom Stead came closest to putting the game to bed with 20 minutes remaining as he rose highest to head Howard’s corner onto the bar.

Crockwell then pulled off another excellent save in stoppage-time as he tipped over substitute Ethan Walker’s drive after a mazy solo run, but the Vale keeper’s efforts were to no avail as North End held on for the win.

Preston Academy manager Nick Harrison told LFE: “Overall, we were outstanding in the first-half in every capacity, we worked hard, passed it well, found some good spaces and scored three goals. Obviously, we’re disappointed to concede the two goals.”

Meanwhile, Port Vale Head of Academy Coaching Michael Ede said: “There were still positives to take from the game attacking wise. I thought the second half was a bit better from both sides, the flow of the ball was a lot more controlled and chances were created.”