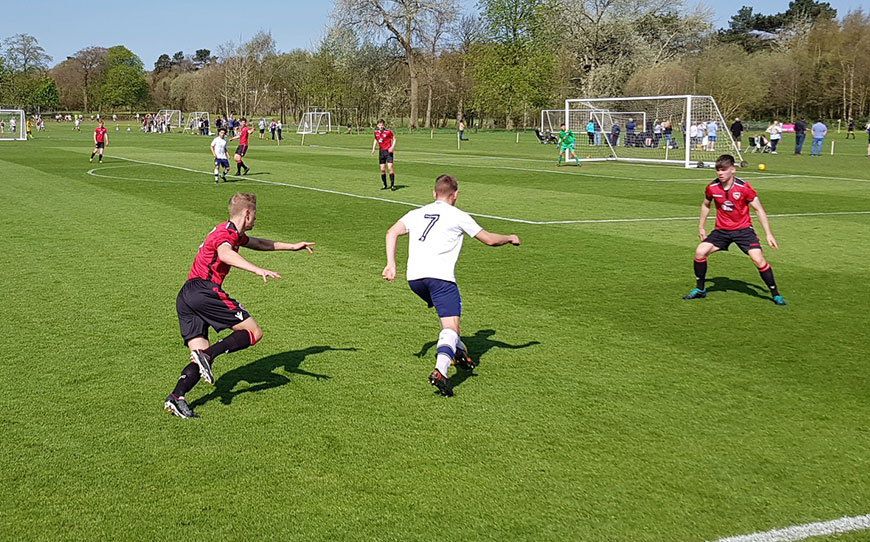 By Andrew Jones: Preston North End Under-18s were held to a competitive 1-1 draw by a well-drilled Morecambe Under-18s side at the UCLan Sports Arena.

Precieux Ngongo’s opener for the home side was cancelled out by Morecambe captain Tyler Brownsword’s strike in the first half as North End failed to win for the fifth straight match in April.

It was a cagey opening as both teams tried to find their rhythm and it was Morecambe who looked the more dangerous as Kyle Hawley and Joe Nelligan both had early attempts on goal.

However, Preston proved to be more clinical as they took the lead on 10 minutes as an Ethan Walker corner was flicked on at the near post and fell to the feet of the unmarked Ngongo, who made no mistake; burying the ball into the back of the net from a few yards out.

The young Shrimps responded well and should have equalised soon after when Hawley met a Leif Davis corner with no defender in sight, but guided his header over the bar.

Two minutes later, Morecambe did level the score. Another dangerous corner from Davis found Hawley, whose initial header was blocked before Brownsword reacted quickest and lashed the ball home on 21 minutes.

After the goal, neither team were able to enjoy a sustained period of pressure, with the best chance falling to Joshua Pollard as a mishit clearance from Davis fell straight to his feet, but Pollard’s shot was deflected wide.

The hosts finished the half with a flourish and their best chance fell to striker Tyrhys Dolan, who was played in by Walker after an excellent run, but the Under-16 player dragged his shot just wide of the post.

North End continued to build momentum after the break and nearly regained the lead after a long ball set Jerome Jolly away, only for him to be denied by Morecambe goalkeeper Ollie Jumeau.

The visitors did begin to come back into the game and after saving a Davis effort, PNE keeper Callum Lenton had to be at his best to deny substitute Kai Herbert from point-blank range just moments later.

Neither side managed to muster any clear-cut chances until the last 10 minutes when Jolly, who had been a threat all game, had two glorious chances within a minute to grab the winner for Preston.

The first saw him beat the offside trap to find himself one-on-one, but just like earlier in the half, he was denied by Jumeau. Seconds later, a deep cross from the left-hand side saw Jolly meet the ball ahead of the on-rushing Morecambe stopper, but he could only flick his header inches wide of the post.

Both teams continued to push for a winner as the game became more stretched, but a decisive goal proved to be elusive and the points were shared.

Preston Academy manager Nick Harrison told LFE: “It was a bit of a scrappy game, it took us some time to get going. When we got going and we passed the ball properly, we opened up Morecambe and created a few chances. What’s frustrating is we didn’t do that right from the start of the game.”

Meanwhile, Morecambe Academy Manager Stewart Drummond added: “It was a typical end of season game. Both sides struggled to get a rhythm going. It looked like a tired performance from both sets of players.”