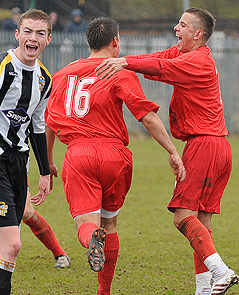 Honours were shared in this bottom of the table clash which saw Accrington Stanley claw back from two goals down to draw the game 2-2.

It was the Valiant’s who made the brighter start and their early dominance paid off when a lofted free kick was met by Andy Bratt who beat Stanley keeper Joshua Molloy to the ball to open the scoring.

The Accrington goalkeeper was then involved in the second goal, felling Anthony Malbon as he attempted to round him, giving Port Vale the chance to double their lead. Malbon duly obliged showing great composure as he slotted the ball home giving Port Vale a 2-0 half time lead.

Accrington fought their way back in to the game in the second half and although Vale had a goal disallowed for offside, gave themselves hope when a Ben Whitcomb free kick was deflected into his own net by Charlie Raglan.

The comeback was completed soon after when another Accrington free kick found its way to Luke McVarish who reacted quickest to poke the ball home.