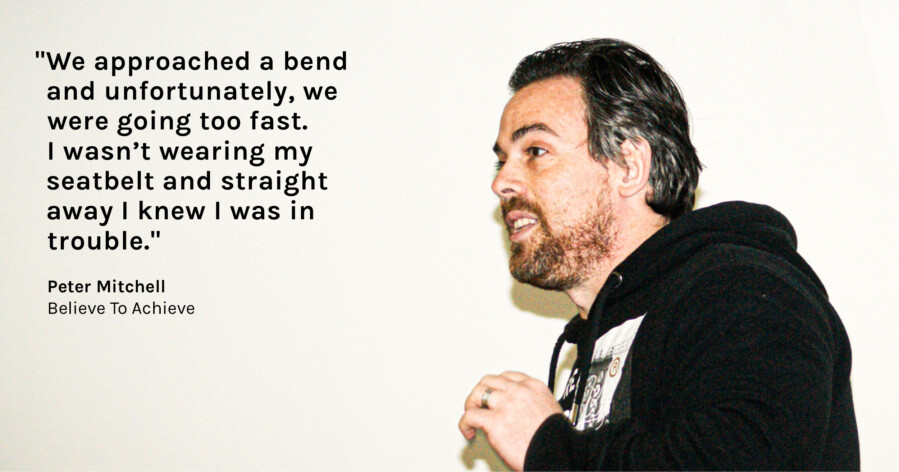 “I’ve got goosebumps watching the video back,” Peter Mitchell pauses, raises his hand to his face and takes a deep breath. “Sorry,” he says to the group, “it still gets me.”

It has been 19 years since the car accident that prematurely ended Peter Mitchell’s lifelong dream of becoming a professional footballer, but the emotions are still as raw today as they were that evening. Peter is at Blackpool and Fylde College, delivering one of six in-person sessions as part of his commitment to LFE’s Life Skill programme. He is passing on his experience of overcoming adversity as an apprentice to inspire budding EFL footballers.

He pauses, occasionally, as he relives the moments that destroyed his childhood dream. Blackpool’s youngsters shuffle in their seats as they take in every word that leaves his mouth. “You have the world at your feet. It won’t be plain sailing. There will be times when you have to dig in, as I did…” he tails off.

Rewind to the turn of the century and young Peter Mitchell is a player tipped to achieve big things at Leeds United Football Club, having moved across to England from his home in Northern Ireland two years prior. The Yorkshire club, back then, were challenging at the top end of the Premier League and making Champions League semi-finals, so the fact that Peter was beginning to impress the first-team coaching staff highlighted just how much talent he possessed as a youngster. “I was a hard-working right back, who liked to get stuck in. I worked incredibly hard on the training pitch, every single day, to get to that position. Nobody worked as hard as me to get that opportunity at Leeds. I had a handful of sessions with the first team – smashing Alan Smith one day and scoring past England international Nigel Martyn the next. I just remember thinking, ‘this is it; I’m going to be a professional footballer, nothing can stop me now.”

However, Peter’s career was stopped, and in the cruellest of ways. Travelling in the backseat of a teammate’s car, Peter was involved in a serious single-vehicle collision which left him with a broken spine and, consequently, in a wheelchair for the rest of his life. “We had driven down that road hundreds of times before, and even on the very morning of the accident,” he says. “They had been asking me to go for food, but I never wanted to go. They convinced me to get in the car, and after some time, I went with them.”

“We approached a bend and unfortunately we were going too fast. We ended up on a golf course. It felt like the longest few seconds of my life as we went through the air. Straight away I knew I was in trouble.

“I wasn’t wearing my seatbelt and I was clinging to the front seat, for what felt like forever. I was sandwiched in between the front seat and the back seat. I couldn’t move my legs. As I lay there, I started thinking about my family back home.”

Fractured ribs, a broken collarbone and a broken sternum were just a few of the injuries Peter suffered. But it was the damage to Peter’s spine that would change his life forever.

“With the injuries I had, they told me that I would never walk again, and, at the time, that was soul-destroying. I couldn’t process the news for a long time. Why me? That’s all I kept thinking. Why me?”

The weeks, months and years that followed were tough. Peter was lost. Up to that point, football was all he ever knew. “I wouldn’t leave my room some days. I didn’t know what I was going to do with my life. Football was my first love. When I left Northern Ireland for England, I never thought I would ever go back. But, just three years later, there I was, returning in a wheelchair with this new identity.”

Moving away from his hometown gave ‘Mitch’, as he is known by his loved ones, the lift he so desperately needed – the chance to reinvent himself and get away from the identity that had followed him around since losing the use of his legs. “I was known as the young footballer who was in a terrible car accident,” he explains. “That was difficult, and I desperately needed to get away from that to move forwards with my life.”

Spool forward to the present day and his revival, from where he was to where he is today, will warm the hearts of those that watched his world fall apart in 2002. His passion for his work; his love for his wife and daughter and his contented demeanour.

It was a career in acting that provided a new focus for Peter, who has since gone on to appear in some of the UK’s most popular TV soaps, such as Hollyoaks and Coronation Street. Understandably, with no previous experience, people would voice their doubts over Peter’s capabilities at the beginning of his acting career – even his own mother questioned his decision when he revealed he was auditioning for a part in a television show. But through force of character, determination, and that inner drive to prove people wrong, Mitch thrived when the cameras turned to him. When the chips were down, Peter picked himself up and dug in. It is who he is.

‘Mentality’ and ‘resilience’ are words he uses frequently during his presentations – perhaps because it is his mind that was, and still is, his greatest asset of all. Perseverance and bouncing back from setbacks are credentials that LFE teach through Life Skills, Personal Development and SEP programmes, and Peter is the embodiment of those qualities.

“I was lying in the hospital and the nurses would come over and say that I wouldn’t be home for a year, and I wouldn’t be back for Christmas. ‘You have to take things slow,’ they would tell me. But I refused to accept that. It was almost as if I had to prove them all wrong. I saw it as a challenge, and it was the same when I was playing football, I didn’t accept it when someone said I couldn’t achieve something.”

“My mind often races back to a cold Saturday morning when we were losing 5-0. It was terrible. We had never played so badly before. It wasn’t in me to roll over and give up, so I continued to get around the pitch and when I saw an opportunity to lift someone, I did. I put someone into the water bottles at the side of the pitch, and after the game, the manager praised me in front of everyone because I never gave up. Two days later I was playing for the reserve team. It just proved that you didn’t have to spray passes around or score a hat-trick every week, it was your attitude and application that was valued most. It was how you reacted when things weren’t going your way.”

Morecambe’s Head of Education Gary Kelly shared his opinion on the positive impact that Peter is having on apprentices following his ‘Believe To Achieve’ delivery last November.

“The talk provided apprentices with the opportunity to recognise that life can change at any moment,” he says. “As Peter highlights, if you can look at yourself and say you have given everything you have, it can provide you with great inner satisfaction, no matter how things turn out.”

Again, Peter scans the room at Blackpool and Fylde College, looking into the eyes of those that sit opposite him. “All my life I have been told I can’t do this; I can’t do that. I use that as a motivator to go and prove those people wrong.”

He is using his unique story to educate the next generation of footballers But why does he do it?

“I’ve been working with LFE for six years now because I want to inspire the young players and teach them to train and play like it is their last ever match. You never know what is around the corner. Hopefully they leave feeling motivated, but also aware of the dangers on the road. Road safety is so important at that age.”

And while the question of whether Peter could have ever gone on to become a Premier League superstar will remain unanswered, the love he has for his wife and daughter is everything he could ever wish for.

“I don’t have any regrets. Not one. I gave it absolutely everything I had during those two years because that’s what makes it so easy now when I look back. I know I gave my all, every single day.

“If we were to rewind time and go back to that split decision of whether to get in that car or not, I would get in it. I have everything I could ever want in life and I’m not sure I would be the person I am today if I hadn’t been in that car.”