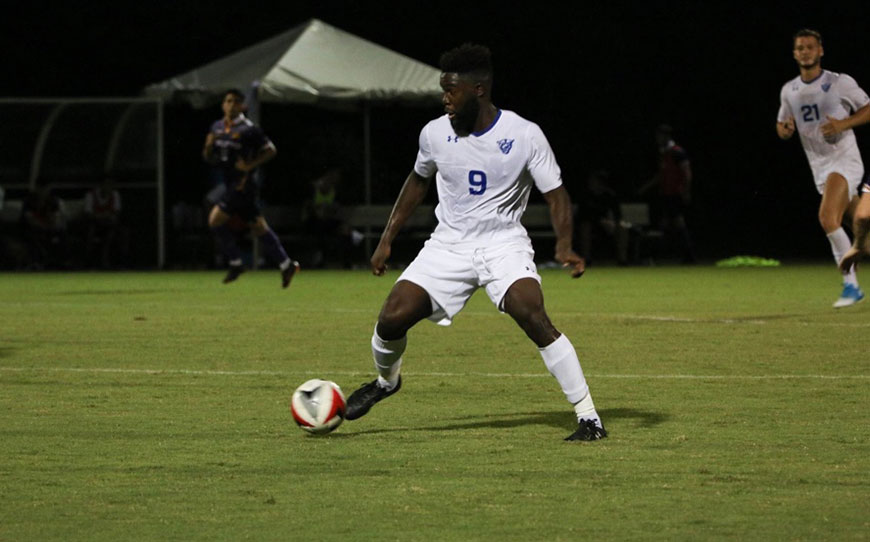 Crystal Palace’s Academy has produced some great talent over the past decade, with the likes of Wilfried Zaha, Nathaniel Clyne, Jonny Williams and most recently Aaron Wan-Bissaka coming through the system into the first-team.

Javen Palmer is another successful former Eagles apprentice, although his journey has been a different one.

Having been released in 2014, Palmer spent six months on trial at various clubs before deciding to take on the challenge of a Soccer Scholarship in the USA at Farleigh Dickinson University in New Jersey, before transferring to the renowned Georgia State University for his final two years.

“I had been at Palace from the age of 8, so I had never really faced any rejection before,” he told LFE. “It was definitely a difficult time. I wasn’t sure what was next but I felt that as one door closes another opens.

“A former coach of mine had mentioned America as a possibility. I didn’t decide until around September, having recovered from a torn meniscus and been on a few trials at some lower league teams. The idea of going to the USA and playing full-time football, in addition to getting a degree, just made perfect sense to me.”

The student-athlete lifestyle means there is a strong emphasis on education. Palmer has embraced his classroom responsibilities, earning a place on the Dean’s List and twice on the President’s List at Georgia State, which celebrate high academic performance.

“I’d say to any apprentice to make sure they are doing their best, even if it isn’t what they necessarily want to focus on,” said Palmer. “You need to put yourself in the best position and it is important to have good grades when you decide you are going to go to America.

“There is a lot of work to do, but once you get to grips with the time management aspect of it, it becomes easier to handle. Once you learn about how to format essays and how to answer test questions, it becomes second nature. “My major is in Sports Administration, which encompasses the whole sports industry really. You learn about the business side and the coaching side. It covers contract laws, sports marketing, sports finance, event planning, event management and many other subjects.

“Some people may find it harder than others, but education is always in your control. You can control how much you study, how prepared you are for a test, or how much you research for an essay.”

The 23-year-old has also been receptive to learning away from the classroom, using the frequent travel opportunities to explore new cultures and increase his knowledge of American history.

He added: “For the games, we do a lot of travelling and I have been to a lot of places on the East Coast. I’ve been to New York City, Philadelphia, Rhode Island, Connecticut, Alabama, Mississippi, New Orleans and more, so I have managed to see places that I would never have envisioned.

“New Orleans was definitely the best trip that I went on. I got to try the local food and got involved in the Mardi Gras celebration. Atlanta has a lot of history and Georgia as a state has great history with regards to the Civil Rights movement. Martin Luther King Jr’s home is in Atlanta and they have a museum dedicated to him, which is really interesting.

“I am currently working at a non-profit organisation called Soccer in the Streets. We do great work for disadvantaged youth in Atlanta. I help to schedule tournaments, handle budgets, recruit corporate sponsors and handle community engagement efforts.

“Football in America is not accessible to everyone because the fees to play are expensive, so doing this work helps to give children the opportunity to play the game. It’s also good for me as I get to interact with different people, learn some administrative skills and gain experience in a working environment.” Palmer admitted he has discovered the importance of developing on and off the field during his time in the States and advised current apprentices to be aware that they can have an identity outside of football.

“Four years have flown by,” he said. “The opportunity to train everyday has definitely made me a better player. We basically live like professionals here. As a person, I’d say I have just become a lot more socially conscious and informed. I’ve definitely grown as an individual.

“Living in London can keep you inside a small bubble, so this was definitely an experience that I will look back on with fond memories. The experience has allowed me to make friends for life and enhance my skills and traits, while also working on my weaknesses.

“At the start of the process, all of my focus was on football and trying to become a professional. Now that I am on the other end of this four-year process, I now see that there is so much more to life after football, and maximising that part of life is going to be important.

“I think that some young pros do not realise that they have a lot of time on their hands. Training is actually a small window of your day. Focus on your football, do extra training on your own. But when that is all done, you can use your hours to better yourself in other ways.

“Learn about another industry, don’t close yourself off to opportunities. Some lads don’t realise they are more than just footballers. I didn’t understand that until about two years ago. It took me to get to 21, and being out of full-time football for three years, to really understand that I am more than just a player. Lads should explore options that will better them as individuals.”