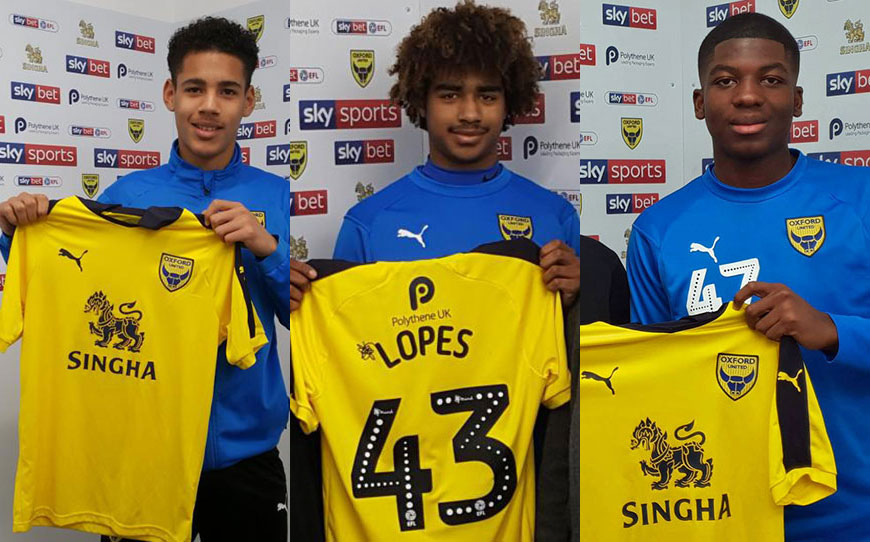 Oxford United have bolstered their developing Under-23 squad by tying up professional contracts for three apprentices, with Kyran Lofthouse, Michael Elechi and Fabio Lopes signing on the dotted line.

Eighteen-year-old winger Lofthouse has agreed a two-year deal, while first-year apprentices Elechi and Lopes have both committed to the club for the next two and a half years.

“It’s what you dream of, so today is a great day for me and my family,” Lofthouse told the club website. “I want to thank everyone who has made it possible and also thank Oxford United for giving me this opportunity. I have plenty to learn still but playing in the under 23s has helped me a lot this year and I know I am at a club that really helps give young player their opportunity.

“All I can do is keep trying my best and if I can keep learning then ultimately the aim has to be to try and get a chance in the first team some time in the future.”

Under-18s coach Leon Blackmore-Such said: “It’s another big plus for the club to see Kyran offered a professional contract and another endorsement for all the hard work that the coaches are doing with all our age groups.

“He is quick, has good ability and wants to learn all the time so he deserves the chance to keep developing and hopefully keep progressing through the system here. We are all really happy for him and now it is up to him to keep working hard and see how far he can go.”

Elechi said: “Everything has happened so fast but I want to thank everyone at Oxford for giving me this chance. Becoming a professional footballer is all I have ever wanted, right from an early age, and I will do all I can to keep learning, keep improving and make the best of this opportunity.”

Blackmore-Such added: “He has been very good for us. He has pace, a great left foot and gets around the pitch really well- he has scored in our last two games so that shows he likes to bet forward. It is another great one for all of the coaches behind the scenes and another sign of the fantastic progress that we are making throughout the Academy.”

Lopes, who has already made his first-team debut this season, said: “It is fantastic for me and I want to do my best for this club because they have done so much for me. The coaches have helped me develop as a player and this season has been brilliant for all of us in the youth team where we have done well in the league and the FA Youth Cup.”

Leon Blackmore-Such continued: “Fabio is another outstanding young footballer. He works hard every game, he makes things happen for those around him as well as scoring a fair few goals, and he has a very bright future ahead of him, as do all of our young players.

“They all know that they have a long way to go and should be seeing this as a kind of extended audition: a chance to keep working and to try and make their way in to contention for the first team.”