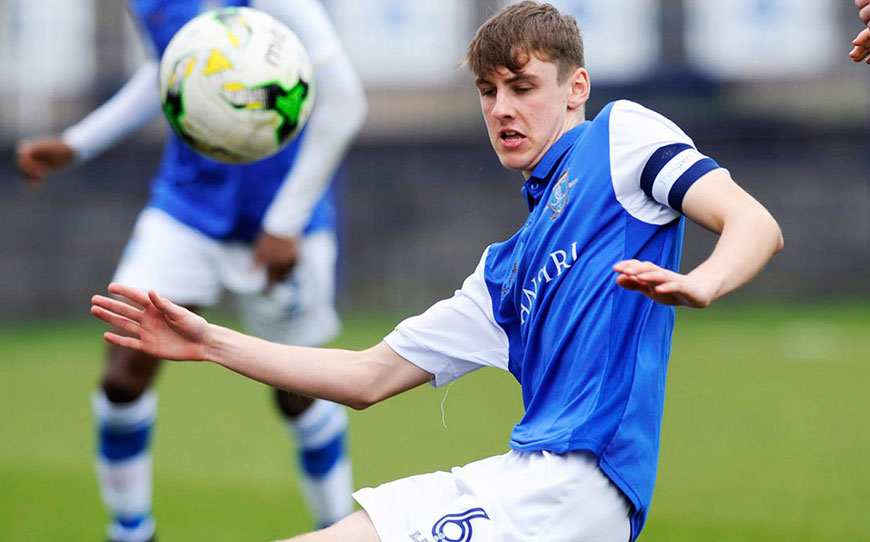 The versatile teenager has been vice-captain of the Under-18s this season and recorded the highest number of appearances for Steve Haslam’s side, while also stepping up to appear in the Under-23s.

“This is the proudest day of my life. It’s one of the things you dream about becoming a professional footballer. It’s a proud day for myself and my family,” he told the club website. “I’ve always been very competitive and even from early at school, I’ve wanted to be the one to achieve the best things.

“On decision day for contracts, my parents waited in the car park and when I came out and said I did it, it was an emotional and proud moment. It’s at that moment you realise how proud they are of you so I was buzzing for them as well as me.

“I’ve always been confident, always believed that if I was given a chance to train and play, I could impress those watching.

“From school, to Sunday league, to development, to academy level and then through the age groups, I’ve tried so hard to get to this point.

“The coaches know I’m very vocal, if I see something I like or don’t like, I think it’s right to mention it and try to be that leader to bring out the best in people.”

Having produced some impressive performances for the Owls, Brennan has received international recognition, featuring for Republic of Ireland Under-18s.

He said: “I’ve enjoyed playing for the Republic of Ireland a number of times. We went away on a tournament to Spain, the Under-18s, and that was another proud moment.

“My grandparents are huge Ireland fans and they were so proud and to have my family fly out to the games was amazing. It was a huge honour to play for your country and now I can’t wait to continue this journey with Wednesday.”

Meanwhile, Under-23s midfielder Warren Clarke has agreed a one-year extension, while 19-year-old Jack Lee has committed his future until summer 2020.

Clarke said: “I’m over the moon to have extended my stay with Sheffield Wednesday. I’ve been here for a long time and I just love playing football, I’m very grateful that the club have given me another chance to prove myself.

“I’ve loved every minute of being here and I wouldn’t change it for anything. It’s great to see the young players getting a chance, it gives us a big boost of confidence knowing there is a way into the first team.

“Hopefully next season I can impress the manager and be around the first-team.”

Elsewhere, defender Lee added: “I’m really starting to feel good after a run of games for the 23s and I’m really happy to get signed here again.

“It’s been a good two years for the 23s, they are a really good group of lads and I’m sure everybody says it but it’s a real team and that is what keeps us going.

“Everybody in and around the 23s has helped and made sure we don’t drop our standards. It was just a shame that we could not get that extra point this year to win the league again but it’s credit to the boys how close they went to back-to-back titles.

“It’s been brilliant to see the boys get in and around the first team and leave their mark, it shows the gaffer is willing to trust in the youth team and why not when we have a talented team.

“It’s a confidence boost to know people at the club want me to stay and hopefully they see a path for me to get into that first-team.”