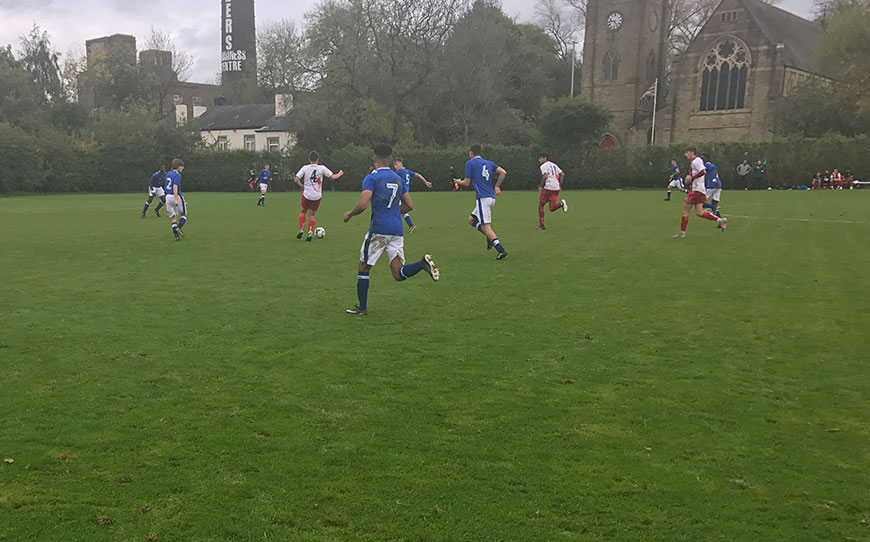 By Matt Clayton: Oldham Athletic Under 18s registered a 2-1 win to lift themselves to top spot in the EFL Youth Alliance North East and condemn Mansfield Town to their first defeat of the season.

Two goals from Chinedu Uche were enough for Tony Philliskirk’s men to take all three points, with Aiden Walker providing mere consolation for the Stags.

Mansfield took the ascendancy in the early stages and appeared the more likely side to open the scoring, although they were unable to cause Latics keeper Joe Boyling much trouble.

And it was the hosts who forced their way in front against the run of play on 22 minutes when Max Norman carried the ball through the heart of the Stags defence before playing Uche through into the area, with the striker providing a composed finish.

Oldham could have doubled their advantage two minutes later from Francois Antoine’s low strike at goal, but defender Walker was at hand to divert the shot clear after the keeper had been beaten.

Having taken control of the game, the Latics almost gifted the visitors back on terms following a miscommunication between Boyling and right-back Andy Hackett.

Under-16 player Hackett headed the ball past the on-rushing Oldham stopper, but Harry Norris was well positioned to produce a goal-line clearance with Boyling left stranded.

Latics Academy Manager Philliskirk was forced to leave the touchline after half-time due to his first-team commitments later that afternoon and the team seemed to suffer without his presence as The Stags began the second half brightly.

However, they were again undone during a dominant period as Hackett surged down the right flank and delivered a pinpoint cross towards the head of Norman, whose effort was saved into the path of Uche to pounce for his second of the game.

However, Mansfield halved the deficit just moments later when Nyle Blake flicked on a cross from the right and Walker was left unmarked at the far post to slot home from point-blank range.

The away team applied plenty of pressure in the latter stages with numerous long balls into the area in a bid to protect their unbeaten league status, but the Athletic rear-guard held firm to extend their unbeaten run in the league to six games.

Simon Cooper, Oldham’s Head of Coaching, told LFE: “We knew it was going to be a battle against Mansfield. We might have got a bit lackadaisical at times but today is all about winning the game and that is exactly what we did.”

Meanwhile, Stags Academy Manager John Dempster was able to draw some positives from the defeat. He said: “If the consistency and the energy levels that this group has shown so far carry on, then I will be pleased.”