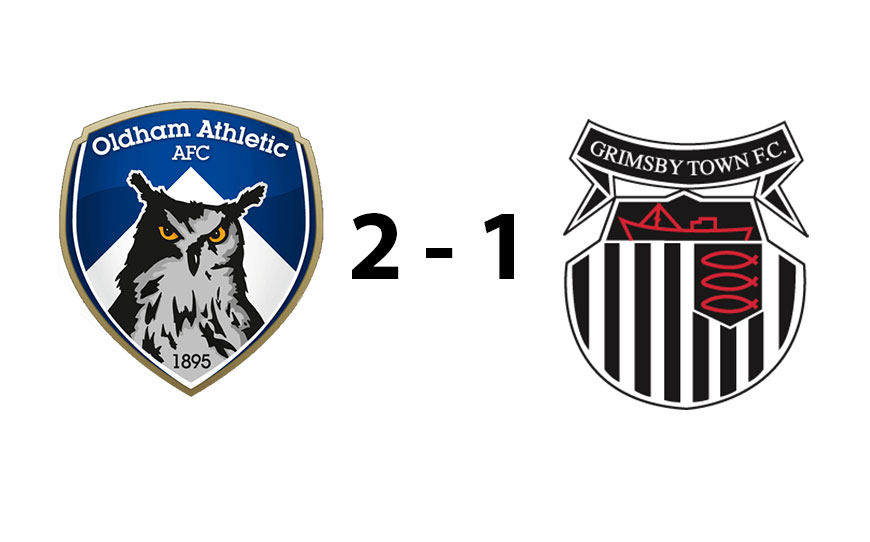 By Matt Clayton: Oldham Athletic Under-18s claimed all three points for first time in the league this calendar year after a 2-1 victory against Grimsby Town Under-18s.

First-year apprentices Harry Robinson and Max Norman were the goalscorers as Tony Philliskirk’s side lifted themselves up to third in the EFL Youth Alliance North East Division, while Rumarn Burrell netted for the visitors.

The Latics had the best of the early exchanges, with two good chances falling to midfield pair Chinedu Uche and Ryan Scholes-Beard, although neither managed to test Ollie Battersby in the Grimsby goal.

The Mariners responded with opportunities of their own, with Emil Powles spurning the pick of the bunch, missing a free header from six yards out.

With 20 minutes on the clock, the hosts broke the deadlock through Robinson, who won possession and played a neat one-two with Norman before calmly slotting home.

However, Grimsby had won their previous three matches and displayed an air of confidence to hit back just four minutes later as Burrell finished off a surging run forward with a composed effort past Latics keeper Ewan McFarlane.

The away team were awarded a penalty 10 minutes before half-time when McFarlane was adjudged to have brought down Burrell inside the area. Captain Brandon Buckley stepped up, but his spot-kick cannoned against the post and ricocheted out of play.

Athletic then had captain Tommy Lent to thank for maintaining parity after producing two last-ditch challenges, as well as stopping one effort off the line from a corner.

Philliskirk opted for a chance of formation in the second-half, reverting to three at the back, which appeared to pay dividends as the Oldham backline reduced the threat of 17-year-old Burrell.

Conditions worsened significantly after the break, making it difficult for either outfit to build any rhythm to their attacking play.

The game was seemingly heading for a stalemate until substitute Lewis McKinney made his mark with 10 minutes remaining, feeding a pinpoint ball through the heart of the Grimsby defence into the path of Norman, who placed the ball past Battersby to seal Oldham’s first league victory since overcoming the Mariners by the same scoreline in December.

Latics Academy Manager Philliskirk told LFE: “It was good that we went on to win the game but there’s a lot to work on. We’re a young team now, with predominantly Under-16 and Under-17 players, but we have got to show more quality in possession.

“The pitch didn’t help, it really cut up after 20 minutes so it was difficult to play on, but I thought Grimsby had one or two more opportunities than I’d have liked.

“But all in all it’s a good three points and we’re pleased because it’s finally our first win in the league in 2018.”

Grimsby’s Lead PDP Coach Neil Woods said: “I’ve just told the players I’ve got no problems with the way they played or their application. On another day we would have won.

“The result shows how far we have come in a year. We came here last year and lost 4-1 and were totally outplayed. We may have been beaten by them twice this year but we’ve given them proper games and arguably could have won both.”