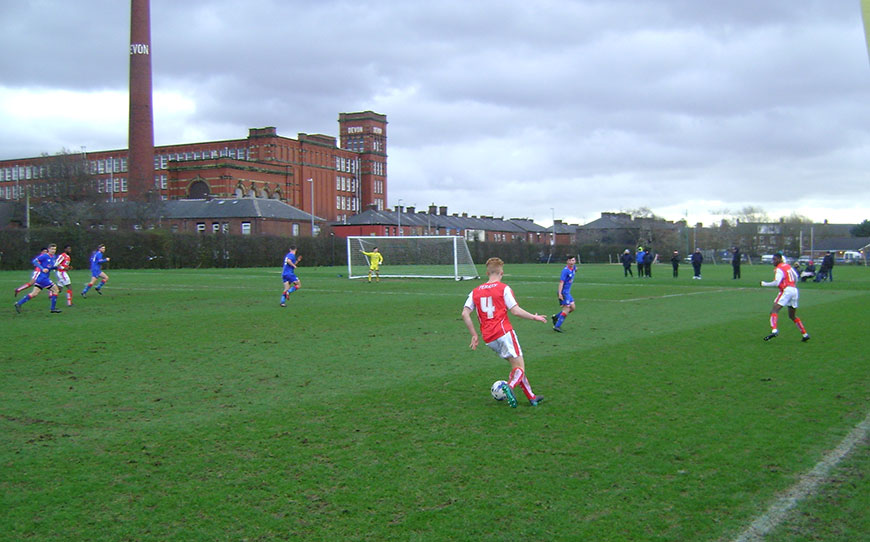 By Joe Neadley: A late equaliser from substitute Bradley Kay rescued a point for Oldham in an exciting 1-1 draw against Rotherham at Chapel Road Training Ground.

However, Tony Philliskirk’s team had other ideas and Kay slotted the ball home following a floated free kick from Alex Read. The match was dominated by inconsistent weather, with intermittent outbreaks of sunshine between periods of rain and hail.

Both managers were left frustrated by the outcome, though satisfied by the efforts their players put in.

Oldham’s academy manager, Philliskirk said, “I think the game was dictated by the pitch, we’ve had horrendous weather up in Oldham for the past couple of months.

“I thought we started the game really brightly, having good chances early doors.

“After that, the rest of the first half was very scrappy, not a lot of quality on show just endeavour.

“Rotherham I thought were the better team in the second half, they missed a couple of great opportunities to put us away but the lads showed great spirit and kept going to get the draw.”

Rotherham boss Gareth Barker commented “I’m very, very disappointed. I thought it was a very good performance by us, especially the first forty-five minutes and bear in mind, we had three or four Under-16s playing.

“I thought they played good football, on untypically, not the greatest surface and created by far the better chances.

“I think both teams had a frequency of chances, but we got three opportunities, one-on-one with the goalkeeper and unfortunately, we only managed to finish one.”

The match itself proved to be entertaining, despite the conditions, as both clubs possessed players who demonstrated considerable skill to become future stars.

The first half however, was a nip/tuck affair, with neither team able to dominate.

After the interval it was a different story, with Rotherham starting to get on top.

Rotherham skipper Fabian Bailey was the catalyst for most of their good work. Leading by example he set the tome for a commanding second half showing. The midfielder twice had chances to score but was thwarted on both occasions. His team mate Bailey-King did break the deadlock in the 82nd minute though.

Oldham though grabbed a last gasp leveller when Read’s floated free kick caught the Rotherham defence out and allowed Kay to score to ensure that honours remained even.