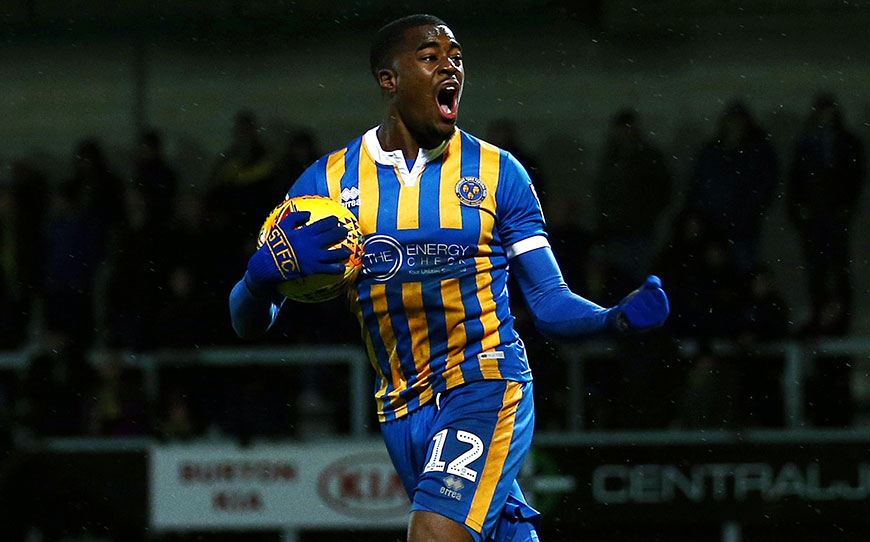 Back in 2015, Fejiri Okenabirhie was at a crossroads in his career.

The talented forward had earned a professional contract at Stevenage having made his first-team debut before the completion of his apprenticeship, but was released after a year and ended up dropping to the Isthmian League Premier Division with Harrow Borough.

Former Arsenal schoolboy Okenabirhie grew up playing alongside Gunners stars Alex Iwobi and Ainsley Maitland-Niles, but in his words, “everyone’s journey is different”.

Undeterred by the setback, the 22-year-old pursued a route into higher education to aid his attempts to rise back up the leagues, which has taken him from the seventh tier of English football to Sky Bet League One with Shrewsbury Town.

He told LFE: “When you’re an apprentice, there are no guarantees that you’ll get a professional contract, so to give myself the best opportunity to get back into education I decided to study an A-Level in Psychology, in addition to the BTEC.

“It was something I wanted to do and was able to do. It was quite tough at times to balance the two but I’m pleased I got them done and it didn’t negatively affect my football because I still got a pro contract at the end as well.

Education gives you something to fall back on in terms of giving you knowledge and opportunities for life after football, but it can also be beneficial in the present, not just for your future.

“As well as obvious transferable skills like self-motivation and time management, it keeps you sharp mentally and gives you something to focus on away from football. It’s a way to relax your mind from those pressures, but also provides stimulation as you’re learning new information.

“When I moved down to non-league, I had more time on my hands and wanted to make use of that, so I decided to start an Open University degree in Business & Management. Doing the course part-time doesn’t affect your training schedule, so I started that just after I left Stevenage and I’ve been working on it ever since.”

Alongside his studies, Okenabirhie has enjoyed a career renaissance on the pitch, spending just one season at Harrow before attracting the attention of Dagenham & Redbridge in the National League, where his impressive form led to an England C call-up.

He further established himself as one of the most exciting prospects in Non-League by scoring a hat-trick against Wales and was awarded England C Player of the Year for 2017-18 before Shrewsbury came calling in June to end Okenabirhie’s three-year absence from the EFL.

“You have to have belief in your ability, know what you want and then work hard to achieve it,” he added. “When you’re playing every week, every game is an opportunity for someone to see you and that’s how you have to approach it.

“If your attitude isn’t right then you’ve got no chance to make those steps because there are a lot of setbacks in football, like being injured or not being selected, so you have to be ready for them and show you’re capable of pushing through them. If you’re not mentally prepared to work hard or you’re not able to use adversity and turn it into positive energy then that’s half the battle lost.

Mental strength is a massive factor in football. You have to take it upon yourself to take an honest look at your game and analyse where you want to improve.”

Combining the role of player and student continues to breed success for the Shrews frontman, with 14 goals to his name in all competitions so far this season, including the equaliser in an incredible 3-2 FA Cup third round victory at Stoke City.

“It’s important to not get too high or too low with success and disappointment,” said Okenabirhie. “Have a strong focus on what you want to achieve and make sure you work hard to reach those targets. If you do that, then your ability will shine through and the rest will take care of itself as there are plenty of opportunities out there.

“Every player wants to play as high as possible, but everyone’s journey is different. I’ve definitely matured as a player and a person. Football is full of ups and downs, you get setbacks, but you have to show a lot of resilience.

“As for my degree, if you’re someone who enjoys learning then why not continue that? For me, the Open University route has made it very manageable and it doesn’t get in the way of my football. You just have to organise your time, get that preparation right and then have the willpower to get on with it.

“Studying part-time means it takes quite a while to complete so you’ve got to stay motivated, but I’m enjoying the course and I’m coming to the last two years now. I can see the finish line and I’m still enjoying it as much as when I started.”