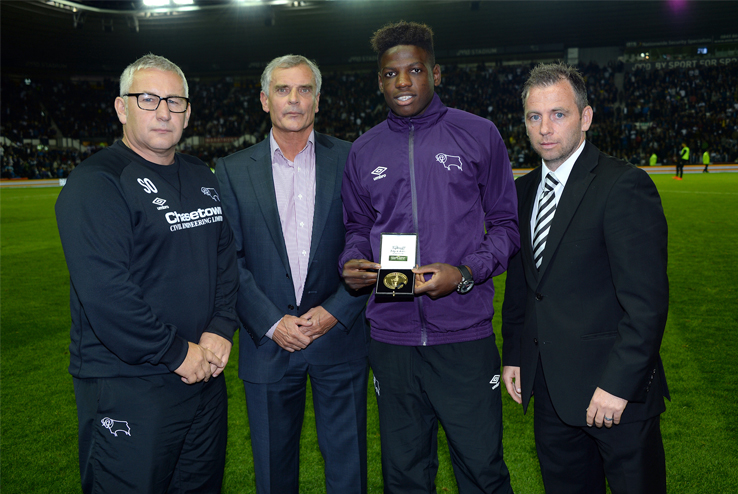 Derby County’s Offrande Zanzala has been named as the winner of the Donald Bell Award by League Football Education (LFE). Zanzala was presented with his medal by former Derby defender and LFE Regional Officer, John Barton, at the Rams Championship fixture against Bournemouth at the iPro Stadium.

The award which commemorates the memory of Donald Simpson Bell VC was instituted to recognise the efforts of a player who has overcome adversity of some form. Bell was the first professional footballer to enlist in the Army during the First World War and went on to win a posthumous Victoria Cross for the bravery of his actions during an engagement in the Somme, France.

Zanzala, 17, was born in the war torn Republic of Congo and has experienced an incredible journey to become an apprentice footballer at Derby – witnessing horrific scenes, hiding from vigilante groups and losing touch with family members.

Now in the second year of his apprenticeship at the club, he said:

I am delighted to receive this honour which has made me reflect upon the life of Donald Bell as a soldier and footballer.

This award recognises hard work, bravery, perseverance and a desire to succeed. I am grateful for the support of many people in my life who have made sacrifices to help me and I thank Derby County for the opportunity to pursue my dream of playing football.”

Derby County’s Academy Education and Welfare Officer, Simon Ord added: “Offrande has persevered through difficult and challenging circumstances and he thoroughly deserves this type of recognition. His life experiences to date have shaped him as a person and he is very appreciative of the opportunity he has at Derby County to try to fulfil his dream of playing professional football.”

Gordon Taylor OBE, The Chief Executive of The Professional Footballers’ Association, said: “While he may only be young Offrande has shown considerable maturity, courage and conviction in the face of incredibly testing circumstances which reflect the qualities of Donald Bell. I am sure these character traits will help him go on to great things in his career and life in the future.”

Andy Williamson OBE, Chief Operating Officer of The Football League, added: “Offrande is a thoroughly deserving winner of this award which recognises the development of one of our young apprentices. He is a credit to Derby County and I hope he enjoys a long and happy career in football.”