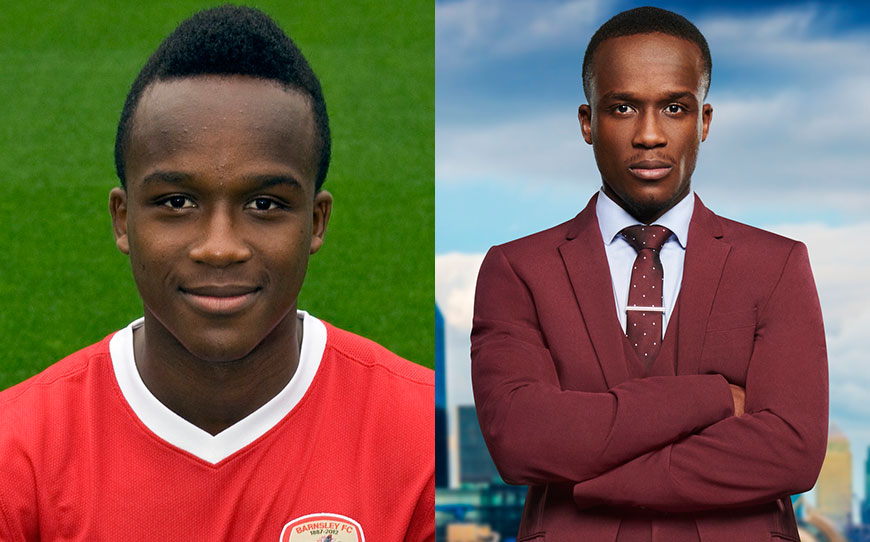 The pursuit of a professional contract in football can be a relentless journey, but not many environments match the cut-throat nature of The Apprentice boardroom.

Having experienced the wrath of Lord Alan Sugar, former Barnsley Academy product Kenna Ngoma can certainly vouch for that.

Since being released by the Tykes in 2013, the 24-year-old has dedicated himself to achieving a career in business, earning a Business Administration and Management degree at the University of Gloucestershire and gaining valuable experience in a range of areas within the industry.

And this year, with the view to building the profile of his emerging ice cream company Beaumonde Desserts, Ngoma took on the challenge of the BBC One reality show in the hope of receiving the £250,000 investment from billionaire business magnate Sugar.

“I always said when I watched the first show in 2005, ‘I’m sure I could get on that, I just need a good idea’,” he told LFE. “I’ve now worked in different industries and different roles and I’d seen pretty much every episode of The Apprentice, so there wasn’t much that I felt could throw me off where I’d feel uncomfortable.

“As soon as we arrived in the board room to start the show, we found out we were going to South Africa. We went straight into the task of selling a safari experience. We were given a fact sheet of animals and were given around an hour to memorise everything and present it the next day. It was a whirlwind, but such a great experience.”

Despite being a popular contestant to viewers, Ngoma unfortunately only lasted two weeks in the process before being ‘fired’ after his task as Project Manager – making and selling ice lollies – ended in defeat following plenty of in-fighting between members of the team.

“I think the disappointing thing is that it’s mostly reality TV – it doesn’t replicate real life,” he said. “If you create an ice lolly, you’d create the mixture and freeze it multiple times, so you’d see it in its final form and we weren’t able to do that, which ultimately let us down on the task.

“When Lord Sugar speaks to you, it’s so tense. You need to try your best to compose yourself and have a clear idea of your rebuttals and comebacks. Anything can come up and you must be prepared for it.

“I said I tried to create a formation where I told people where to play, but certain individuals didn’t apply themselves properly. There’s only so much you can do. I still think I got stitched up, but I guess you need to find a way to adapt. Hindsight’s a beautiful thing but I don’t think I’d change much.

“I spoke to Claude (Littner) off camera and he said it was some of the worst in-house squabbling he’d seen in a long while. He said I did well, but I was always going to struggle with the bickering, so at least he did notice that.” The disappointment of an early exit has not dampened Ngoma’s spirits, however, with plans ramping up to fully establish his business, which specialises in creating vegan, alcohol-infused ice cream.

“I used to think you could launch a product in six or seven weeks, but it’s almost impossible,” he continued. “Especially in food and drink, there are so many regulations.

“You need certain certifications, certain people need to vet your company or product, you need the labels to be correct, etc. It’s such a long process – you get to a certain point and then have to wait. We’re just finalising manufacturers at the moment.

“I enjoy it because, even now, I’m always learning. You think you know everything about your product and then something else crops up that is new. You have to put so many different hats on and that’s what was so good about my University degree because I went through all those different aspects of business and then had to apply it in a different context.

“Modules included the likes of entrepreneurship, financial decision making, marketing, strategic management and leadership, so it provided a great understanding of business and it’s up to you which area you ultimately want to specialise in.”

Ngoma credits his commitment to education during the apprenticeship at Barnsley as a key factor in helping him already build up a strong CV.

Having secured the required grades to attain a University scholarship, he graduated within two years before working in several roles across multiple companies, such as Sustainable Procurement Advisor, Project Analyst and various Project Management and Business Analyst roles at a loans, mortgages and finance company. “There’s the rest of the day to fill and you can either waste that time or you can use it to research things, learn new stuff and start preparing for your future. I always thought that if it didn’t work out at Barnsley then I wanted to go to Uni straight away, so I didn’t want to have to do a top-up course or a Foundation degree or anything like that.

“I love the land of unknown, where you’ll start at a new place and you’ll have to learn new skills and expand your knowledge. There are so many things I’ve done across all the different places that are then applicable in my current position as a Senior Project Analyst at AstraZeneca, but in a different context, so then you start piecing things together.

“I always forget that I’m only 24 and people often won’t commit to a certain area until their late twenties, so I’m just using this time to find what I truly want to commit to. Also, who you know can be just as important as what you know, and I believe it’ll be beneficial to my future that I’ve been able to meet a wide variety of people by exposing myself to new industries.”

Although Ngoma has elected to transition away from football, he insists there are plenty of comparable themes between the world of business and his time progressing through the Academy system.

“When I was interviewed for The Apprentice, one of the questions they asked was about how my past footballing career would help me,” he added. “I thought that it really toughens you up mentally because every day you have to push yourself and you’re competing with the other lads in your team.

You need to be so driven and ambitious to become a footballer and I’ve still got that same fire; I’m just applying it in a different field by striving for success in business.

“That time as an apprentice teaches you to manage your time, working with others, maturing and being professional, which are all skills that relate to business.

“If there’s one thing I’ve learned so far, it’s the need to be patient. I’m one of those people where I dip into several activities or ideas, but struggle to finish things. My advice would be to have a clear vision from the start and then focus on achieving it properly.

“However, you’ve also got to be innovative and think one or two steps ahead to keep progressing. There’s one project that I’ve already got in my head that I think is better than the ice cream one, but I’m finalising it at the moment to make sure I’m launching the right product.

“Sports people are naturally competitive, so if you find an area that interests you, you’ll work hard to be the best you can be. You’ll read up on that topic, keep sticking at it and you’ll slowly reap the rewards from that.”