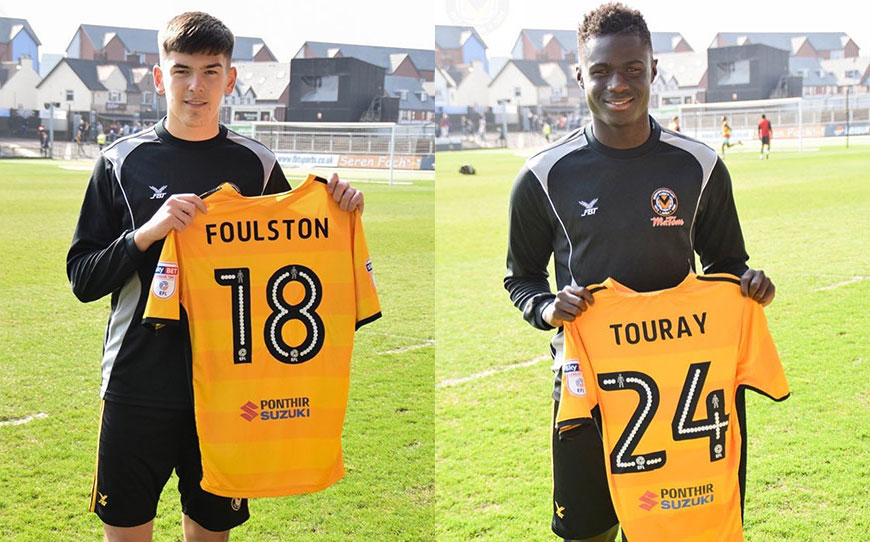 Newport County academy duo Jay Foulston and Momodou Touray have both penned their first professional contracts with the Exiles.

Striker Touray, who featured in LFE’s ‘The 11’ in February, has signed a deal until June 2019, while defender Foulston has committed his future until June 2020.

Foulston has been rewarded after progressing into the first-team this season, appearing twice in the Checkatrade Trophy having made his senior debut in a 2-0 Carabao Cup victory at Southend United in August.

He told the club website: “I’m delighted to sign this pro deal. It’s always been a dream since a young age and I’m glad that Newport County AFC have given me this opportunity. I’m looking forward to the Seasons to come and hopefully breaking into the first team.”

Manager Mike Flynn added: “It’s a fantastic opportunity for Jay to prove he can make a living out of the game. He’s someone with a great attitude and is keen to learn. If he takes on board what is being asked of him, he will have a very good career in the game.”

Meanwhile, Touray scored with regularity in the first year of his apprenticeship to steer the Under-18s to the EFL Youth Alliance Southern Merit League One title and has since received international recognition, being capped for Wales at Under-19 level, including a memorable debut when he scored in a 4-3 win against Switzerland.

The 18-year-old said: “I’m delighted to sign my first pro-deal with Newport County AFC. I’ve loved every minute of being at this club so far and I’m delighted that my time here can continue.

“I’ve been given a great opportunity now to progress and I’m going to work hard and try to make the most of it. The aim has always been to play professional football and I’d love to be able to do that with this club.”

Flynn continued: “Momodou has excelled during his time with the Wales Under-19s side. It goes to shows how important the Community programme is as he was first spotted by Norman Parselle while he was part of the County in the Community College Programme.”