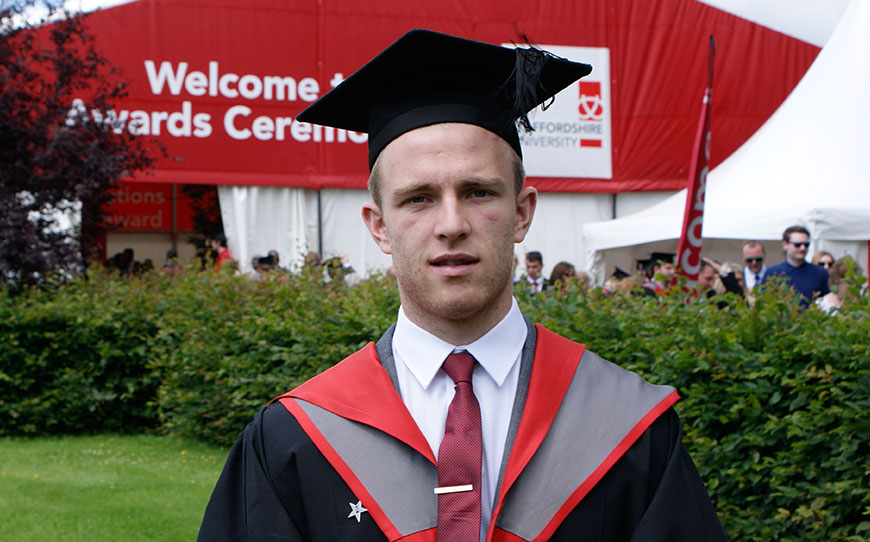 Former Nottingham Forest apprentice David Morgan is celebrating life as a university graduate two years after being released by the Championship club.

The 22-year-old, now at National League North side Nuneaton Town, has prepared himself for the future after completing his apprenticeship and seeking the assistance of The Professional Footballers’ Association.

“I left Nottingham Forest when I was 19 and I didn’t really know what I was going to do with myself,” he told LFE.

“I left there thinking I needed to move onto the next club but that didn’t come as quick as I thought it would, so I thought I better look elsewhere as well.

“I spoke to a few people that had been on similar courses through the PFA and so I got in touch with Oshor Williams and Pat Lally (The PFA Education Department).”

After that conversation, Morgan elected to study sports writing and broadcasting at Staffordshire University alongside some fellow ex-professionals.

He said: “You’re only there once every six weeks on a Wednesday or Thursday, whichever day they arrange.

“But a lot of the work was online, so the important thing is to keep checking online, keep checking your emails, when your deadlines are… being organised was key.

“I left school when I was 14 to move to Nottingham Forest, so for me to come away from that to do something two or three times a week at an academic level was quite difficult but it helped me because I had a proper routine.”

The course gave Morgan the opportunity to gain some real-life work experience that provided him with a better appreciation for the demands of the job.

“I did work placements in the newspaper field and it opened my eyes to some of the demands of the job, like having to file match reports on the whistle. That’s quite difficult,” he said.

“I was at a game with a journalist and it all changed in the last two minutes and he’s got to file that within five minutes of the end of the game.

“If he doesn’t, the editor at the paper is onto him and that’s the most difficult thing that I’ve found about it. But there’s obviously different parts to it all.”

Morgan excelled during the two years, exceeding his own expectations by earning a first-class honours degree.

“I really wasn’t expecting that. I was hoping for a 2:1 but that was top level,” he added.

“The whole way through the course I never really kept an eye on my results, I sort of just got on with the work and handed it in when it was due. When I found out I got a first and I was pleasantly surprised.”

And despite not being certain of his desire to pursue a career in his degree subject, the course has given him a basis to do something else.

“I’m actually not sure that I want to go into sports journalism,” said Morgan.

“I’m probably looking down the line of doing a PGCE to become a school teacher but I haven’t looked into it enough yet to be able to decide what I want to do.”

Morgan stressed the importance of developing academically as a football apprentice and encouraged others to follow in his footsteps.

“When you’re at Nottingham Forest and you’re a bright prospect, you’re always thinking ‘I’m never going to need that’ but reality hits and that’s when it hit me, when I got released and I needed something else,” he added.

“It’s not even that they’re (young players) so concentrated on football, I think a lot of the people that they’re listening to are saying ‘don’t worry about that just yet, you’re young’ but a lot of people leave academies and they don’t go anywhere, they can’t go anywhere because they haven’t played enough games, so it is important that when you leave the academy you have something behind you.”

To watch the interview, click on the link below: