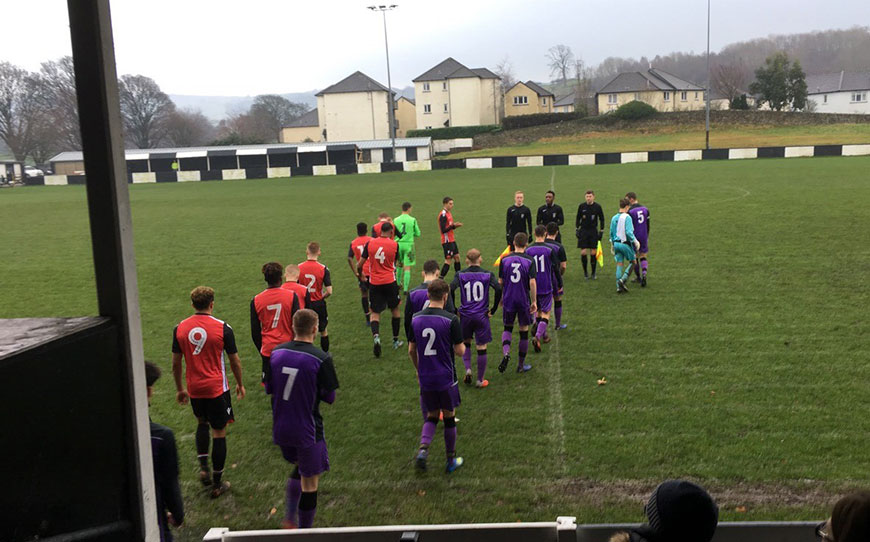 By Harry Ewbank: A brace from striker Kai Herbert helped Morecambe Under-18s to a comfortable 4-1 win against Port Vale Under-18s.

Herbert’s double, along with goals for Amilcar Codjovi Djau and Freddie Price, helped the hosts leapfrog their opponents into ninth in the EFL Youth Alliance North West division.

Morecambe adapted quickly to a tricky surface and controlled most of the early proceedings, but despite creating numerous chances they were unable to find a breakthrough in the opening stages.

Vale struggled to impose themselves on the game and were restricted to efforts from distance, with Joe Berks trying his luck with a collection of long-range strikes at goals.

And after 25 minutes of dominance, the Shrimps finally went in front as Herbert took advantage of some suspect defending and poked the ball past the onrushing keeper.

The second-year apprentice doubled his tally seven minutes before half-time after the visitors failed to clear the danger, with a string of blocked shots eventually leading to Herbert tapping home his second of the game.

And the home side completed the first 45 minutes in style by breaching the Vale defence for the third time, with some neat touches on the right flank allowing Codjovi Djau to cut inside onto his left foot before sending a looping shot into the back of the net with aplomb.

A much-improved Vale display after the restart paid dividends as they reduced the arrears through 15-year-old substitute Nelson Agho, who found space in behind Morecambe’s defence and applied a precise finish.

However, that proved to be mere consolation as Neil Wainwright’s side restored their three-goal advantage on the hour mark when Price received the ball from Abimbola Obasoto on the edge of the area and calmly slotted into the corner of the net.

Vale forced a few late chances in search of a route back into the game, with Jack Wakefield striking the bar, but they failed to avoid an eighth defeat from their last 10 league matches.

Shrimps PD Youth Coach Wainwright told LFE: “It was a similar sort of performance last week against Blackpool, but we didn’t get the result we wanted (1-1) – so we pressed upon them that that’s the way we want to play.

“We will stifle teams in their half of the pitch, win the ball back and start to play and I thought we did that really well today.”