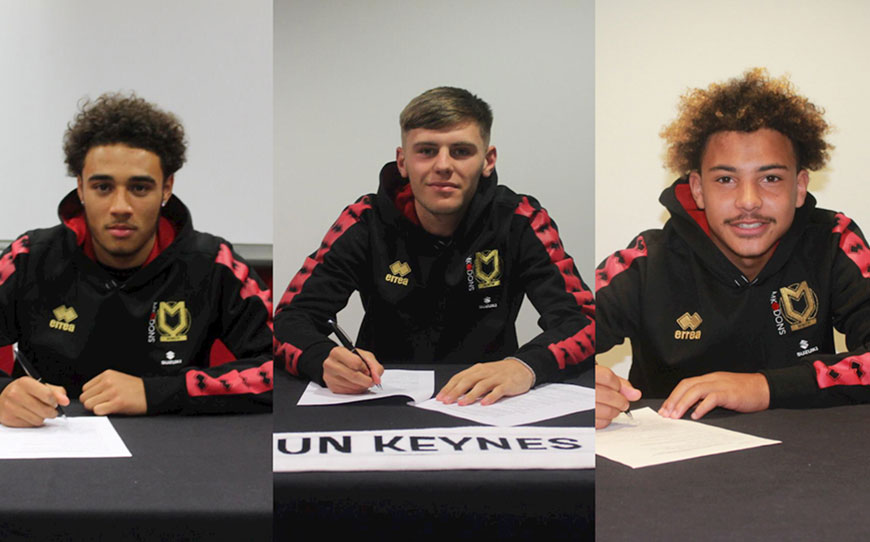 Bird gained his first experience of senior football as an unused substitute in the Checkatrade Trophy against Stevenage in 2017, while he spent two months on loan at Hitchin Town last season.

Midfielder Pattison also went out on loan last term, impressing at Welwyn Garden City, while he made his first-team bow for the Dons by appearing off the bench against Peterborough United in the Checkatrdae Trophy in October.

Elsewhere, Sorinola arrived from Fulham as a 16-year-old and established himself as a regular member of the Under-23s’ starting line-up, helping them finish second in the Central League South table.

The teenagers will be hoping to follow in the footsteps of forward Asonganyi, who made three appearances in Sky Bet League Two and scored in a 3-0 Carabao Cup victory over Charlton Athletic during the 2018-19 campaign.

First-team coach Danny Butterfield told the club website: “The immediate thing for the young professionals is about getting up to speed as quickly as possible. It is a big jump for them, made even bigger because we’ve been promoted.

“They are at different stages. Dylan has trained with the first-team for the last nine months, while the others became regulars for the Under-23s by the end of last season. That doesn’t mean that any of them are ahead of the other in terms of selectability.

“Paul Tisdale is a manager who has always selected players irrelevant of age. Maybe not straight away, but we’re hopeful that one or two of them can show enough progression and development in their game to become selectable and be able contribute this season.

Academy Manager Jon Goodman said: “It is great to see four players sign their professional deals from this age group. In the Academy, it’s always providing the first-team management with selectable players so it’s a proud moment for us all.

“For Dylan, Jay, Patto and Matthew, now they’ve got to look to seize their opportunity, particularly at this key pre-season stage. They’re going to need to work incredibly hard, building their identity within the first-team squad across all aspects of their performance, as well as demonstrating the character the first-team management are looking for.”

Edu Rubio added: “Charlie became captain of the Under-18s in the second year of his scholarship and established himself as an important player in the team. He earned the trust of Tis with his performances and attitude last season, enough to warrant an appearance for the first team.

“Matty has been a revelation with the Under-18s. He’s always been a reliable down the flank and can play on both sides which makes him a versatile option for the first team. I think that adaptability will help him as he makes the step up.

“Jay is a talented young striker. He has goals in him but he’s also strong with his link-up play and he’s a player how to use his physical attributes. I’m confident he can make an impact this pre-season.”