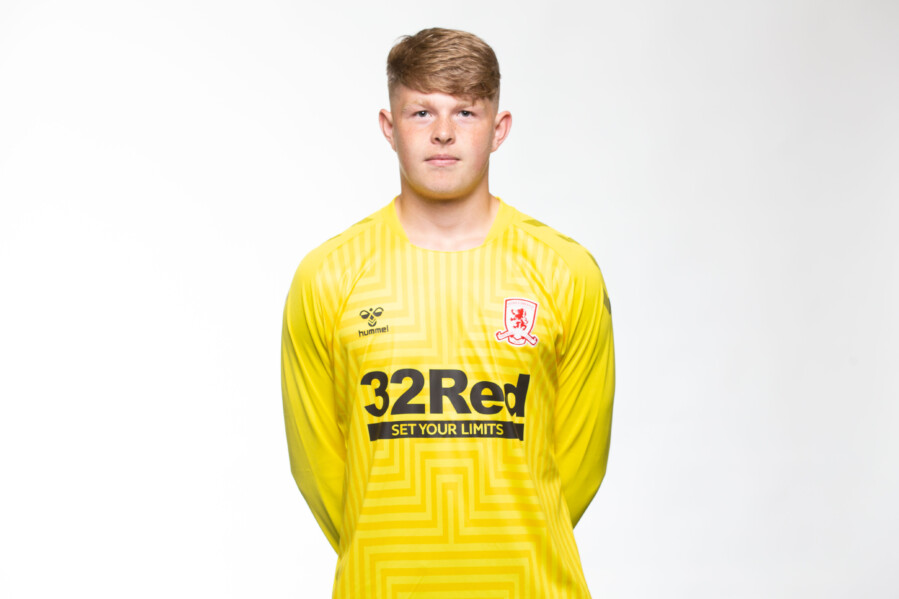 Young Middlesbrough stopper Oliver Swan has worked tremendously hard since he secured an apprenticeship with the Championship club back in 2019, overcoming learning difficulties and emotional challenges to accomplish things he thought he was never capable of, both on and off the pitch. Now into the third year of an extended apprenticeship, Oliver is thriving in Middlesbrough’s Development Squad and enjoying a new outlook on life.

As a child, Swan represented his county in cricket, excelled at squash and possessed terrific hand-eye coordination. The natural athletic ability that caught Boro’s eye runs in the family, with his father being a well-known non-league footballer in the North-East region and his elder brother earning a rugby scholarship after leaving school.

So, when Swan first joined Middlesbrough’s academy as a nine-year-old, there was no doubt in his mind that he possessed the talent to go on to become a professional footballer.

“Oliver was convinced at the age of 10 that he would play professionally,” Head of Education & Welfare Barry Dawson tells LFE. “He had so much confidence. He told his primary school teacher: ‘I don’t have to do this work Miss because I’m going to be a professional footballer when I am older’. He believed that he didn’t have to do anything at school and that it wasn’t important to him because his sole focus was on being a goalkeeper.”

While his determination to succeed in football was unquestioned, the budding goalkeeper struggled academically during his primary and secondary school years. “He had issues with concentration, found the school environment difficult and lacked attention during lessons,” Dawson adds.

Struggling to settle, Swan moved from Kings Academy in Year Nine to Ingleby Manor, before being expelled and having to find a new school again in Year 11. Bede College in Billingham agreed to help Swan and, with the help of Dawson and Middlesbrough Football Club, facilitated a tailored programme consisting of two days a week at Middlesbrough’s academy and three days at college.

Swan’s behaviours throughout those school years subsequently led to his diagnosis of ADHD. In light of that, Dawson proceeded to work very closely with Swan and his parents to ensure that he got through his education and had a support system in place for when it was needed.

“We said unless you go and complete an academic programme, the two-year scholarship that we were offering him would be removed. Because of that, there was an incentive for him to apply himself. That was a real driver for Oliver,” Dawson explains.

“He found it difficult in the early stages but began to find his feet towards the end, as he started to integrate with the group more and see others around him striving to achieve something. In a way, they became his role models.”

Upon completion of the final year of school, Swan began his full-time apprenticeship with the club, before a personal issue halted his behavioural progress. It was at this moment that Middlesbrough decided to adapt its apprenticeship programme to suit Oliver’s individual needs. Dawson was determined to build the right learning environment for Swan to flourish, so began working with LFE’s Regional Officer Paul Bartlett, as well as the club’s coaching and medical staff to agree on the best approach.

“We sat down and had lots of different discussions. I think we realised that we had to alter teaching methods for Oliver. We agreed on certain styles: surrounding Oliver with praise and positivity; setting small, achievable targets; offering rewards when successful,” Dawson says.

“A reward could be something as little as letting him go outside to have a kick about for 10 minutes before returning to the classroom. That was enough to motivate him.

“To get the best out of him, we started to give him things to do that he enjoyed. For example, when we were teaching a topic such as Health and Safety, we wouldn’t start with the legislation of the Health and Safety at Work act 1974, because that wouldn’t capture his attention and we would lose him for the rest of the lesson. Instead, we would do a goalkeeping session and then ask Oliver to discuss the health and safety around that. It was getting him to do something physical and then getting him to write about it afterwards and putting a bit of theory in.

“I think Oliver has grown used to criticism and people telling him that he wasn’t going to achieve, so positivity has a huge impact on him. Equally, there was a balance between praise and constructive criticism. We wouldn’t let him get away with things; we would let him know that we were disappointed and that he had stepped out of line when we needed to. With that, there was a shift in his behaviours. He began to trust the support staff and bought into the programme.”

A huge influence on Oliver’s progression in recent times has been Boro’s Goalkeeping Coach Chris Pennock, along with his fellow goalkeepers who he works with on a daily basis. Pennock’s infectious positivity has galvanised Swan, while also making him realise what is required to achieve his dream of signing a professional deal. Staff members have noticed that he is much more positive in his outlook and his thought processes have changed.

“Throughout the two-year scholarship, we saw the biggest change in any individual we have ever seen before,” Dawson reveals.

“He has gone from a person who didn’t believe in himself and who thought he wasn’t going to achieve anything, to somebody who is positive and believes in his abilities. He realised that by being a good person and displaying the values that we promote at the football club, he would get people to respect him.

“A lot of his progression in terms of personal development is down to working with Chris every day, learning what good standards, application and behaviour looked like; and watching the goalkeepers around him work extremely hard on the training ground.

“That same application he showed out on the training pitch transferred over to the classroom.”

The 19-year-old’s footballing journey is only just getting started, but to get to where he is today, enjoying his football, feeling comfortable in a learning environment and striving for more qualifications, is a fantastic achievement.

“It’s been a long, hard road, but to see how far he has come is brilliant,” Dawson says.

“He has passed his Functional Skills Level Two and received his £400, which he is made up with. He showed a lot of persistence with that after falling short twice. He said to me, ‘I’m going to do it, Baz’, and he did.

“Also, he is starting to think about the next steps for his personal training qualification. He’s been looking into the Level 3 course, which is a bit more science-based but he is going to get some support from staff and the college. He has developed really strong relationships with the goalkeeping group and college staff and trusts them implicitly now. Oliver used to thrive on attention, and as a schoolboy, he was seeking it through alternative behaviours before he had a realisation that it perhaps wasn’t the right way to go about it.

“I think mentally Oliver is in a really good place compared to where he was two or three years ago. The message to him now is to keep learning. We have told him that he can’t stop now, learning needs to be viewed as a positive thing rather than a negative thing. He’s come such a long way and It’s been a pleasure experiencing his progress.”