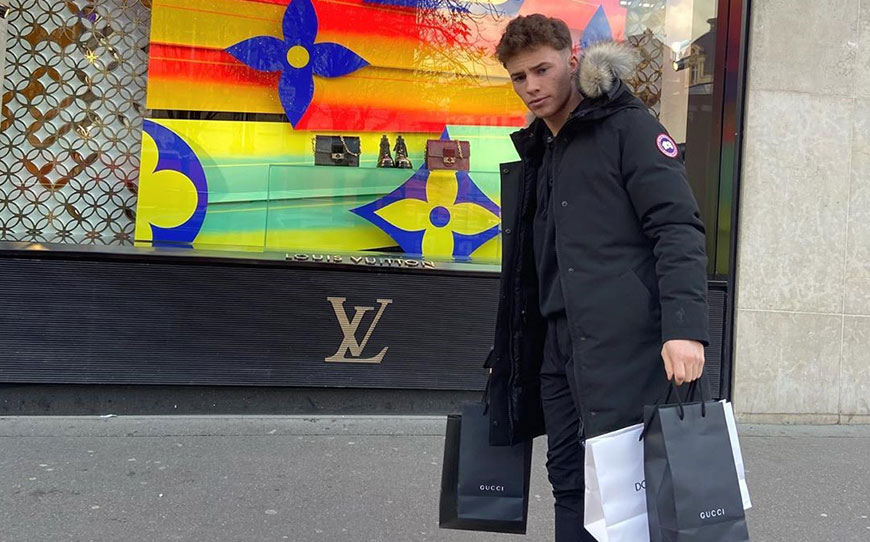 While many of the exciting Latics prospects are eyeing progression into the first team, midfielder Joe McWilliam is targeting further accomplishments away from the game.

Alongside his apprenticeship, the 18-year-old has pursued his keen interest in business, creating five online clothing companies with a combined following of over 200,000 people on Instagram.

“I’ve had ups and downs with playing time and injuries, but I’ve really enjoyed being an apprentice at Wigan,” he told LFE. “I’ve been inspired by the success of some of the other lads who have excelled on the pitch.

“At the start of last season, I damaged my MCL and spent six or seven months out. This year, I’ve struggled with hamstring injuries. Being a footballer is something I’ve dreamed of since being a child, but I came to the realisation that a career at a high level wasn’t tailored to my skillset. I found that my talents were probably better suited to other areas.

“I’ve had an interest in business from a young age. At the age of 13, my first venture was painting on shoes, which I eventually sold. Aged 14, I did gardening for six months, where I created leaflets and handed them out to everyone around my area. From that, I bought a weed stick at Home Bargains for £2.99 and off I went.

“People think as an athlete, you can’t be creative or can’t have other interests, but I looked at players like Tyrone Mings, who has his interior design business, so there are examples of players at the highest level that have managed to pursue other industries.”

McWilliam decided to step away from his playing commitments at the turn of the year, focusing more of his time on completing the BTEC Extended Diploma and building his online brand, with ‘The Uneek Hub’ and ‘The Bootcycle’ becoming particularly popular.

He continued: “I package parcels, I buy stock, I manage my own finances, I advertise and answer all messages on social media, I try to model as well as I can – although that’s probably not my best area.

“There’s obviously different elements to those roles as well, like packaging parcels can be broken down into getting the order on your phone, inputting the shipping address, using your label printer, packaging the product, stocking up mail supplies and so on.

“My photography probably isn’t the best and sometimes it’ll take me an hour trying to get the right angle and lighting, but if it leads to a sale then that time spent is worthwhile.

“I’ve hit hurdles at times. I was a bit overwhelmed with tax and how to manage my finances, considering different bank accounts and stuff like that. But I just thought, ‘why can’t I make some time and learn about this stuff’? I felt that I’d come to the stage where my business was doing really well, and I no longer wanted to juggle that with football.”

The young entrepreneur identifies communication and confidence as the primary attributes that have contributed to his success so far, which he feels are transferable skills between football and business.

“On the pitch, I’ve never claimed to be the most talented player,” said McWilliam. “I’ve always lacked a left foot and a yard of pace, but in other areas I’ve been able to lead. I’ve used my voice to help others and I’ve demonstrated leadership by directing my team-mates.

Speaking effectively is very important for a footballer during a game and in the dressing room and that translates into everyday life.

“I remember walking to school and speaking to a lady walking her dog most days. It was only a two-minute conversation, but I felt that was important for my development and also just hopefully making her day a bit better.

“I think there is a perception that young people can be ignorant and indulged in their mobile phone. To put the phone down, speak to people and plan things that you want to do or achieve, I feel that’s a better use of your time.

“Developing confidence is something I’m always striving for and you achieve that by testing your comfort zone.”

Reading has also become a focal point of McWilliam’s routine, offering a combination of relaxation, entertainment and stimulation.

He added: “My mates ask me why I read even though I’m a footballer and I tell them I want to educate myself, I want to develop as a person. I’m always keen to read about successful people’s process and try to install their positive habits into my routine.

“It’s brought clarity to my own thinking. I knew it was unlikely that I’d be able to make the next step to becoming a professional, but I identified the skills I do have and thought about how they can help me succeed in other areas.

“I’ve read books like Bounce and The Talent Code. I’m currently reading The Secret, which has really changed my mindset because it’s encouraged me to be more positive and given me more belief. There’s no point hoping something will sell, I’ve got to believe that they will. If I can’t sell the idea to myself then I won’t be able to sell it to others.”

His drive to expand the business has seen McWilliam attempt to unlock foreign markets, with a Christmas trip to Paris involving networking visits to various big brands.

“I went there with my girlfriend and we had a good time. We went to Disneyland and did some exploring, but then on Christmas Day I was shopping and looking for ways in which I can make money or find products that people will want to buy,” he said.

“I guess it comes back to confidence. I don’t speak any French other than ‘bonjour’ and ‘au revoir’, but I went into shops and tried to network with others and see if there were any sales on. I tried to speak to people in store and get email addresses and other contact details so that I can shop in Paris from the UK. I’ve now developed contacts in Louis Vuitton and Gucci.

“At the airport, my girlfriend rang me asking where I was because we had to board the flight. I was in Louis Vuitton having champagne getting a new rucksack. I had to run to the gate to catch the flight, but the next day I sold that item for an extra £200. In the moment, you might be flustered, but ultimately I maximised my time and came home with a profit.”

Having accepted a professional career in football is not the pathway he will lead, McWilliam is grateful to have invested his spare time into exploring alternative options, as well as concentrating on his studies.

He said: “There hasn’t been a day in the seven years I’ve been at Wigan where I haven’t developed. I’ve never been the most talented player, but I’ve always worked hard.

“I’ve probably reached the peak of what level I can achieve as a footballer, but there are a lot of lessons I’ve learned in football that I can take with me.

My time at Wigan hasn’t ended because I focused my spare time on business. By pursuing another interest, I realised that my skills were better suited to that industry.

“As a contingency, it’s been important to complete my education. I’ve looked at University and other avenues to increase my business knowledge. To have the Extended Diploma and the target grades that I’ve been set, if I achieve those then it certainly puts me in a good position for the future.

“If you’re able to sell your product, sell your ideas and present yourself in a manner that people can trust, there’s nothing stopping you succeeding, no matter what financial backing you’ve got.”