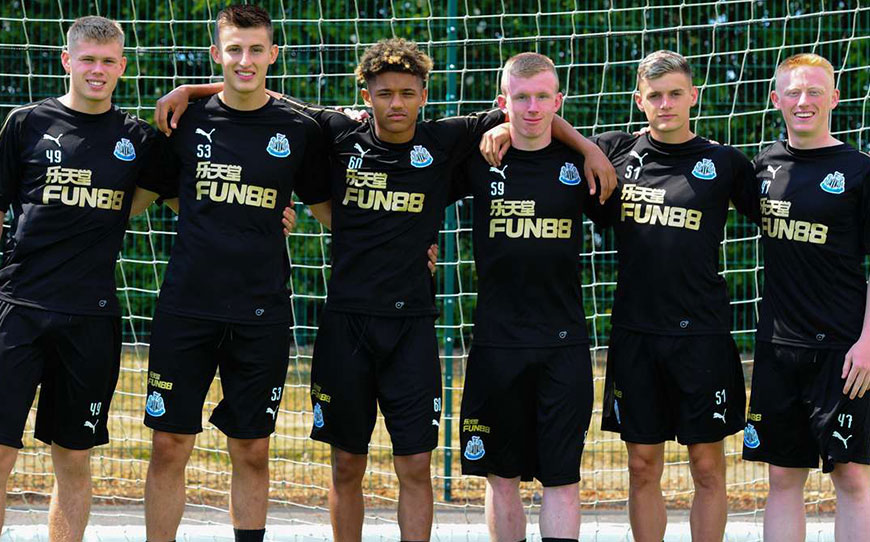 Wilson caught the eye for the youth side and progressed into the Under-23 squad during the second year of his apprenticeship, making five appearances and scoring once, while he also made his England Under-18 debut in March in a 4-0 victory over Qatar.

The winger told the club website: “I had a good season last season, especially towards the end getting into the England squad and it just shows that your hard work pays off.

“I’m working towards a dream. It’s what you want ever since you’re young; when you’re at school you say ‘I want to be a professional footballer’ and now the day has come.

“Hopefully I can carry on from this, keep working towards my goals. I need to kick on from last season, keep improving as a player, keep developing and do my best on the pitch.”

Allan has also broken into the Under-23s with a solitary start to his name, although his most memorable display came in January 2017 when he netted twice in an FA Youth Cup win against Swansea City at St James’ Park.

“Before that game, I didn’t get too much game time but since then I’ve been given more chances and that’s put me in good stead going forward,” he said. “To be given this opportunity is amazing. I’d say I’m one of the quicker players and I like playing on the defenders’ shoulder or even if I’m on the wing I like getting at players one v one.

“I don’t think defenders really like going back towards their own goal so it creates a different threat.

“There’s a lot of competition for places but I hope to get a chance for the under-23s, take it, and keep my place in that starting eleven.”

Watts was another player to star in the Youth Cup, scoring a hat-trick in this season’s third round against Brighton & Hove Albion and added to his tally against Crystal Palace and Norwich City.

“If you can deliver in the big games it gives you that extra boost for the other league games and training,” said Watts, who featured in LFE’s Goal of the Month in September 2017.

“I’ve supported the club since I was a little kid and I’ve always aspired to be a professional at this club so to finally get the signature on paper feels good. Now it’s about impressing and showing what you’ve got.”

Meanwhile, full-back Cass appeared four times for the Under-23s during his first year and made more starts for the Under-18 team than any other Magpies apprentice during the 2017-18 season.

He said: “Since a young age, I’ve always supported Newcastle and I’m just glad to sign for such a big club. It’s something I’ve been working towards for several years now and a big thanks to my mam, dad and whole family, and the coaches as well.

“It’s been a hard road but I’m glad to be here. Hopefully I can impress the coaches and make a name for myself.”

Longstaff’s excellent performance on and off the pitch was recognised with a nomination into LFE’s ‘The 11’ in December 2017, balancing his progression into Under-23 action with strong commitment to his education.

By turning professional at St James’ Park, Longstaff follows in the footsteps of his brother, Sean, who enjoyed a successful spell on loan at Blackpool last season.

“We’re pretty close, so we try to help each other,” he said. “We’re training together at the minute and we come in together so it’s nice to do stuff with him. He’s a good professional so it’s good for me to learn from him.”

Elsewhere, Walters was sidelined during his first year through injury, but recovered admirably to establish himself as an important figure at left-back in the Under-18 side.

He added: “I’ve supported Newcastle all my life and had a season ticket with my dad, Brian, for about six years. I’ve been here since I was eight, progressing all the way through, so to get to this point is great.

“A few seasons ago I had a long-term injury and was out of football for a year, but I’ve worked hard to get back fit and backing playing again.”