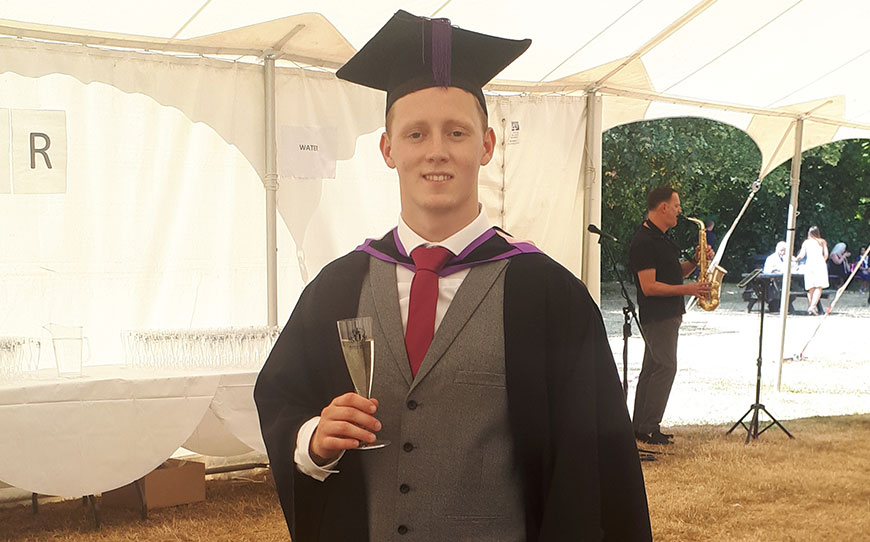 However, MacFarlane’s career has followed a very different path as he moved into higher education, achieving a first-class degree in Law at the University of Portsmouth.

Now, the 24-year-old is thriving in his new role of Compliance, Health & Safety and Legislation Technician at TJ Transport, who provide bulk haulage and waste management services in the Southern region.

He told LFE: “My role is split across three separate departments of the TJ Group – TJ Transport and TJ Waste – and the plan is for those areas to expand, which hopefully can lead to a supervisor or managerial role for me.

“It is my responsibility to process near misses and accident reports, support all investigations into road-traffic accidents, collisions and incidences and carry out risk assessments and site audits at all TJ office spaces, waste transfer stations, inert recycling centres and quarries.

“I also ensure the entire workforce are fully up to date with external, internal and regulatory training and produce a wide variety of management reports regarding all things related to compliance, health and safety.”

MacFarlane has come a long way since his time at Brighton, but he believes the apprenticeship gave him the necessary tools to develop on a personal level and prepare for the future.

“I live in Portsmouth, so I had to move into digs at Brighton,” he said. “It was a big learning curve having to live away from home and then being paid to work was a big step as well.

Being an apprentice is a very different experience to what most 16-year-olds go through. It definitely moulds you as a person, it makes you a lot stronger and more street-wise.

“Unfortunately, after two great years it didn’t end up how I wanted, but it definitely gave me the drive and desire to be a better me and I feel that’s certainly carried over to the present day.”

The right-back suffered an injury towards the end of his apprenticeship, which left him unable to go on trial initially after being released. Although he did eventually find a home in the Conference South, MacFarlane had set his sights on a return to education.

“You are always going to need something after football because it ends for everyone at some stage,” he added. “Taking the college stuff seriously makes you consider these options more.

“Education teaches you to be focused, to be disciplined and I felt that once I’d finished my apprenticeship, there was nothing that I couldn’t do. Using my Level 2 Coaching qualification, I managed to get a job doing a bit of coaching, which was fantastic, plus I was also working at Tesco as a delivery driver for a while.

“I then got a contract at Eastbourne Borough, who actually trained in the day. I’d planned to build on my qualifications at that point but could only go on evening courses, so I went to my local college and the only course that interested me was law.

“I thought that’d be a good A-level to get and I ended up really enjoying it, so with the UCAS points from that, in addition to the BTEC and NVQ that I did as an apprentice, I was able to gain a place at the University of Portsmouth to start my law degree.”

In four years as a student, MacFarlane fully immersed himself in Uni life and left with top honours. He credits much of his success to his time as an apprentice.

“University has been a fantastic experience,” said MacFarlane. “You make friends for life and it was another chance to live away from home and deal with the day-to-day challenges that come from that.

“My apprenticeship really prepared me for University in a way I never expected. It taught me to be independent, I was a lot more mature and it gave me life skills that made me ready for the experience of meeting new people, taking on new challenges and living away from home.

I think apprentices need to realise that they’ve managed to get to a high level in football and they wouldn’t have got there if they weren’t intelligent. They’ve got focus, drive and an ability to absorb and analyse information installed in them, otherwise they would never have got to that stage in the process.

“Those sacrifices like staying in when your mates are out late, eating properly and putting in extra hours of training to build your physical fitness, that sort of attitude to work hard and master your craft are directly transferable to the experience of University.”

In addition to his degree course, MacFarlane became a member of the University’s Electric Class 2 Racing Team, wrote for the General Legal Advice Clinic’s blog and was a quarter-finalist in the Aspiring Solicitors Commercial Awareness competition.

He said: “The great thing about University is that there is a wider experience attached to it as well, it’s not just all work. You’re encouraged to go out and experience new things and you come into contact with people from all over the world.

“It’s not the end of your football career either. I still play now in non-league. With the various societies as well, you might even end up picking up another sport that you’ve never considered before and that’s what University is all about – trying new things and learning more about yourself.

“The University Electric Racing team was an example of me just pushing myself out of my comfort zone. I took part in an International Engineering competition known as Formula Student, which takes place every year.

“Universities from all over the world attend, like the University of South West Australia attended this year’s event. I was surrounded by engineers and my knowledge of the subject is very limited, but it gave me an appreciation of what the other students do and my role was to develop a business presentation, which we presented to the judges.”

Six years on from his days at Brighton and primed to succeed in his new profession, MacFarlane’s journey is proof that the apprenticeship programme can facilitate a wide variety of alternative pathways.

He continued: “Football for me now is about enjoyment. It’s good for your health, mentally and physically, it’s a chance to make new friends and you get a type of banter that you don’t necessarily get in the office environment.

“The ultimate aim is to become a director of the company and I’ve set a personal timeline for that as well. My managers and directors that are here now are fully aware of my ambitions and they know that I have high expectations of myself.

“They’re very supportive and I’ve got a lot of training ahead of me, so there’s going to be a lot of learning involved over the next few years and I’m really looking forward to it.”