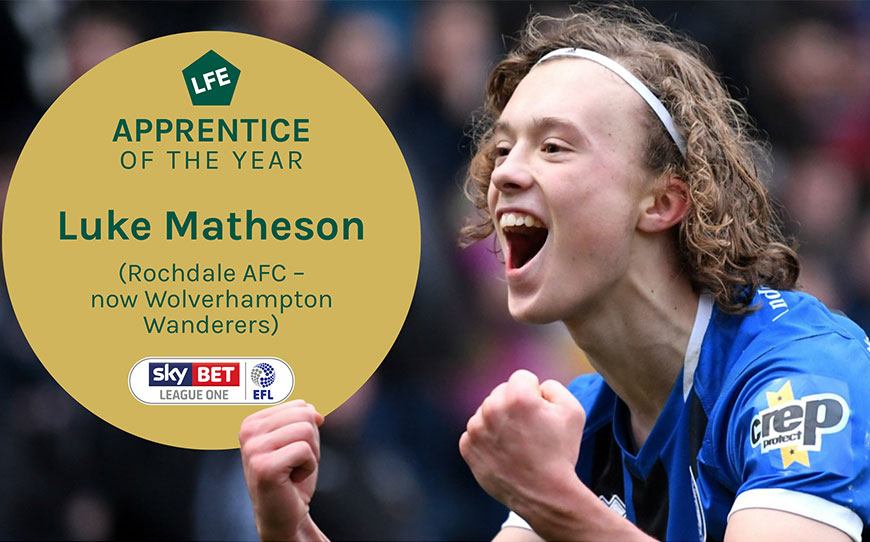 Rochdale’s academy is responsible for the LFE League One Apprentice of the Year for the second successive year, with Luke Matheson following in the footsteps of last year’s winner Dan Adshead.

Seventeen-year-old Matheson had already gained first-team experience prior to becoming an apprentice, making seven appearances during the 2018-19 campaign.

However, the promising full-back announced himself on the national stage in September when he scored the equaliser in the Carabao Cup third round against Manchester United at Old Trafford.

The England Under-18 international played 29 times as a first-year apprentice and is now preparing for the new Premier League season after Wolverhampton Wanderers swooped for him in January.

“Luke’s development in a footballing sense has been amazing and there for everybody to see,” said First-team Manager Brian Barry-Murphy. “The dedication and values he has displayed in all other aspects of our club life has been truly inspirational and allowed us to really show what a role model of our club should look like to both young and old players alike.

“His respect for each and every one of our coaches and team-mates right from the start of his journey has been unwavering and his thirst to learn equally from everyone has given us all a unique insight into how much we can all learn and progress together in a competitive and thriving environment.

“He has handled his exposure into the national limelight in his own understated manner and has retained all of his youthful qualities, while showing great maturity and has always had a smile on his face.

“Luke has made a huge impact on my own first steps in management and has always made my job so easy and so enjoyable and so easy to focus on the real reasons why we do what we do.”

Although he has made a significant impression on the pitch, Matheson’s passion for education has really set him apart from his peers.

Having achieved hugely impressive GCSE results, incuding 8s and 9s in PE, History, Physics, Chemistry and RE, the multi-faceted teenager, who was named in LFE’s ‘The 11’ in November, elected to study three A-Levels – History, Psychology and Sociology – alongside his first-team football commitments.

LFE Regional Officer Craig Skinner said: “Studying A-Levels for any apprentice is a challenge, but to undertake them while consistently being involved in the first team is particularly difficult for obvious reasons.

“Luke has attended school on Wednesdays, as this is his day off from training. LFE also set up three one-to-one tuition sessions, one in each subject, which helped Luke immensely.

“Despite this extremely full working week, Luke progressed very well in all subjects, demonstrating a commitment to learning way over and above the norm. I am sure Luke will continue to progress in each subject, aided by his motivation and discipline to study in his spare time away from the club and school.

“Luke is a standout individual who has demonstrated a will to succeed in every area of his life. He is a polite, mature and driven young man who I am sure will be a success both on and off the pitch.”

Academy Manager Tony Ellis added: “Luke has fantastic timekeeping and a great attitude off the pitch. He has a tremendous habit of juggling every day life with football. After scoring against Man United, he had an exam at school the next day. A day after passing his driving test, he signed for Wolves.

“Luke is highly regarded by the players and staff at the football club, not just as a player but as a person. For someone so young, he has constantly shown maturity and utilises the 24 hours of every day to learn and develop both on & off the pitch, which is a credit to him and his family.

“He has been a magnificent example of everything that we would hope and want our players to be as they progress through our club right from the early stages of our academy through our integration phase and into the first-team environment.”