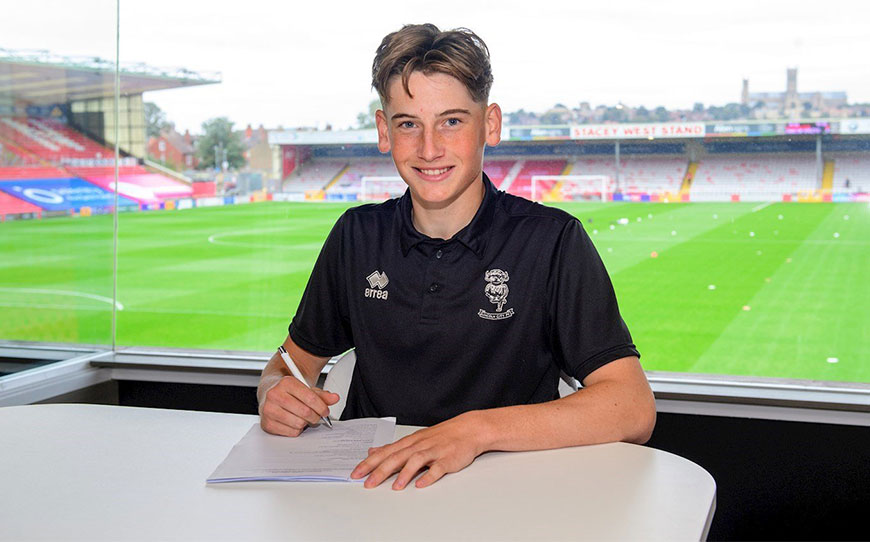 Lincoln City youngster Sam Long has penned his first professional contract, having impressed in goal for the club’s youth team.

Before starting his apprenticeship last season, the 17-year-old had been out of the Academy system for six years since a short spell at Crystal Palace came to an end.

But Long, who was named in LFE’s ‘The 11’ in March 2020, settled straight away and regularly trained with the first-team goalkeepers last term as a first-year apprentice.

In particular, the highly-rated stopper was hugely impressive in an FA Youth Cup third round tie with Manchester United, which saw him produce a man-of-the-match display. Meanwhile, he is also thriving academically, studying an A-Level in English alongside the Extended Diploma.

He told the club website: “It feels great, I’m really proud and I’d like to thank my parents and everyone who has supported me because it’s what I’ve been aiming for to be a professional footballer.

“One of the biggest reasons that I came to the club in the first place was that they offered me (the option) to do my A-Level. In just working with my teachers, I’ve improved in that as well and hopefully I’ll get a good result there too.”

Director of Football Jez George added: “The pathway for every scholar that we offer a professional contract is different. In Sam, we are signing an extremely talented young goalkeeper with huge potential who has made fantastic progress over his 15 months at the club.

“In the short-term, he will not be challenging for a place in our First Team but we have made a long-term commitment because we see Sam as a potential future no.1 goalkeeper for Lincoln City.

“Whenever a scholar signs a professional contract, it is always a team effort and this is no different. Sam’s parents have been fantastic throughout the whole process, from the moment we first spotted Sam playing for Royal Russell School.

“Numerous staff across the academy and first team have also played their part in Sam’s development, but I would like to highlight the role of our Goalkeeper Coach, Steve Croudson. Steve has been crucial in Sam’s progress, which has really accelerated since our return to training this season, and he will continue to be a massive influence, pushing Sam every day.

“Sam knows the really hard work is only just starting and this is just the next step in a long journey. He couldn’t have a better goalkeeper coach for what he needs than Steve and, in Alex Palmer, he has the perfect role model.”