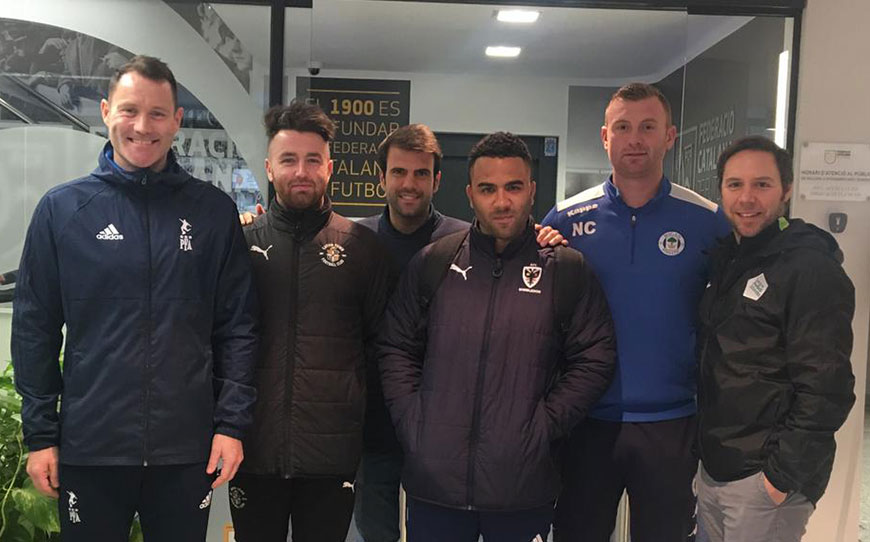 League Football Education have handed four coaches the opportunity to experience new ideas and methods of developing young players with a trip to Spain, fully subsidised by the Erasmus+ fund.

The trip got straight into action after touching down in Barcelona as we were treated to a visit to the Camp Nou to watch Barcelona v Getafe, which was a tremendous opportunity to watch the world’s best players, particularly Lionel Messi, in the flesh. The experience did not disappoint and it was great to get a close-up view of the game, as well as a terrific defensive display from the away team.

A visit to the Catalonian FA was next on the agenda. It was great to be able to sit down and go through the structure of the coaching program within Catalonia and discuss varying viewpoints on the development of players within the game here in Spain and England.

This provoked a very interesting discussion as the Spanish model still provides players with opportunity to play for their region, with three players per club being made available for selection for the region, who then participate in a national tournament.

I was also intrigued to hear about the pathway of a Spanish licensed coaching system, as well as the UEFA model. I felt I gained a good understanding of how the multi-disciplinary coaching staff combine to provide fluid sessions between all elements (technical/tactical/physical/social). It was a pleasure to spend some time with both Vidal Paloma and Israel Lopez Ferrer.

In the afternoon we spent some time at UE Cornella. This was a club I was looking forward to visiting due to its connection with Wigan Athletic first-year apprentice Victor Maffeo, who started his footballing journey there. The facilities were limited to one 3G training pitch but it was obvious to me that there was an excellent culture and staff were running an organised, professional and well-structured coaching program. We were able to watch a coaching session, which actually mirrored one I would take myself back in England.

We then came together to discuss the personal development of youth team players on the scholarship program back home, sharing ideas and experiences on how best we can provide the right type of support for the players. I enjoyed engaging and examining the various ways the other coaches and clubs, along with LFE, are providing the players with opportunities and experiences that they can take forward and develop themselves as young men.

Next, we visited the training facilities at the Football Association of Catalonia and were briefed by the coaching staff from the Under-12 regional representative team. Interestingly, the coach spoke about only getting the players together once a week in preparation for a tournament in April and his focus was on the attacking philosophy he will be looking to implement within these sessions. I thought it was brilliant to see so much going on in smaller areas and coaches working with so many pre-academy players from five to 12 years old.

The trip has been very rewarding so far and has already triggered thoughts on how I can improve the coaching and learning taking place at Wigan. Next stop, La Masia!